Barbarians at the Mall Entrance 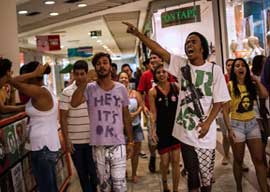 What do you call it when thousands of dark-skinned, slum-dwelling youths conspire on Facebook to suddenly show up at a swank, tony, mostly white shopping mall?

Some might call it a party. Others would call it a nightmare. In Brazil, they call it a rolezinho, AKA a “little stroll.”

Such little strolls have been an escalating cause of alarm in the past couple months as loud, giddy throngs of teens from Brazil’s notoriously wretched favelas pour out en masse from the dilapidated roach motels they call home and into the gleaming, glittering palaces of consumption typically patronized by the nation’s upper crust.

Although in its infancy, the rolezinho phenomenon recalls prior instances of deliberate mass intrusion into public spaces and private establishments such as the lunch-counter sit-ins of the American South in the 1960s, the Occupy Wall Street debacle of a couple years ago, and the randomly violent black flash mobs that have been one of the Obama Administration’s signature achievements.

A rolezinho in early December at SÃ£o Paulo’s Itaquera shopping center attracted an estimated six thousand gleefully disruptive teens that culminated in a police crackdown. Although apologists meekly claim that these teens only seek acceptance and a place to sing, dance, flirt, and share communal joy without being hassled or oppressed or made to feel inferior due to their skin color, video footage from the December event reveals throngs of loud shirtless assholes loping around scratching their nuts and creating near-riot conditions that likely drove away anyone who’d innocently arrived at the mall seeking to buy things. Then again, maybe one man’s rudeness is another man’s revolution.

There have been an estimated dozen or so rolezinhos in Brazil since December. On January 4, a rowdy little stroll at Shopping Tucuruvi led to a mall shutdown. A week later, another rolezinho at Shopping MetrÃ´ Itaquera resulted in a crackdown involving rubber bullets, tear gas, and Brazil’s famously overeager police whomping partygoers with nightsticks.

This led to at least a half-dozen malls in SÃ£o Paulo obtaining court orders to block such future events, allowing them to station police and security guards outside who could bar entry to unaccompanied minors. This naturally led to cries of racism, discrimination, and accusations that Brazil was an “apartheid” state. Just as America’s civil-rights movement shat upon the idea that business owners should have the freedom to refuse service to whomever they choose, it was deemed a crime against humanity that wealthy mall owners should refuse to open their glass doors to hordes of ghetto rats who may not possibly have the best of intentions.

A planned January 17 rolezinho at SÃ£o Paulo’s super-chic Leblon shopping mall was expected to draw nearly 10,000 party-crashers, but mall owners nipped it in the bud by shutting the place down for the day. Similar preemptive shutdowns have occurred elsewhere. The nation has thus arrived at a temporary and unsustainable standoff”rather than call in the Shock Battalion to beat teenage intruders senseless and possibly set off large-scale social unrest, they will merely retreat and lock their gates…for now. But this can’t last. Sooner or later, something will have to give. Such is always the case when hordes of angry peasants seek acceptance on demand.