Barbarism in the Courts 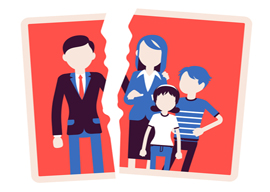 Liberal policies have been “separating children from their parents” for years.

The beasts! What kind of monsters deliberately separate innocent children from their parents? This descends to a level of barbarism that is unspeakable!

The outrage certainly does touch a nerve in all of us, because on a visceral level we all do find something disturbing about destroying the innocence and vulnerability of children by forcibly removing them from the love and security of their parents. We can all remember enough of childhood to feel the heartbreak.

But not enough, apparently, to stop governments throughout the United States from doing this on a routine basis and on a scale so massive that the Trump administration’s immigration policies are minuscule by comparison.

In the U.S. and other democracies, innocent children are routinely torn away from legally innocent parents in enormous numbers and for reasons that have nothing to do with their wishes, safety, health, or welfare. This is the routine practice of family courts, which—it is no exaggeration to say—hardly exist for any other purpose. In family court, a parent can file for divorce or separation and, without any evidence of any legal wrongdoing by the other parent, the courts will summarily force the other parent to stay away from his children on pain of incarceration. Any unauthorized contact with his or her own children is from that point a crime (for that parent, but not for anyone else on the planet). Recovering full access to one’s children is impossible, and many children never see their parents again.

“The result of all this is children who are much more than traumatized. They are also destructive and expensive.”

All of this is the product of the “no-fault” divorce revolution—a system of blatant injustice that was legislated as part of the radical feminist agenda in the 1970s.

A letter recently sent to President Trump by the American Psychological Association might serve far better as an indictment of the destructive effects of the divorce machinery than of some unintended consequences of immigration policy:

Decades of psychological research have determined that it is in the best interest of the child and the family to keep families together…. Sudden and unexpected family separation, such as separating families at the border, can add to that stress, leading to emotional trauma in children. Research also suggests that the longer that parents and children are separated, the greater the reported symptoms of anxiety and depression are for children. Adverse childhood experiences, such as parent-child separation, are important social determinants of mental disorders.

So why is there no moral outrage over this as perpetrated on a huge scale by family courts? Because the same media and scholars who shed such crocodile tears over the Trump immigration policy have for decades engaged in a systematic blackout over this injustice, which severely traumatizes children and sends countless parents to jail. Because the media and academic establishments are unswerving supporters of radical feminism, they refuse to entertain any discussion, let alone criticism, of its increasingly extreme and destructive agenda.

Meanwhile the United States Conference of Catholic Bishops weighs in with its own sanctimony. In the Catholic Church, marriage is considered a sacrament. Yet the bishops cheapen their own sacrament with ludicrous fictions like using “annulment” to disguise what they know very well is, in plain English, unilateral and involuntary divorce, inflicted on innocent parents and children usually with no legal grounds. They then studiously look the other way as government functionaries shred their sacrament and rip children from perfectly fit and innocent parents. And then they wonder why people are abandoning the churches.

Yet more cynicism is seen with the demand that “victims” of “domestic violence” should be given a free pass when it comes to immigration requirements. Domestic violence hysteria is also part of the divorce industry and one of the most dishonest campaigns in American politics. It has absolutely nothing to do with physical assault, and the alleged “victims” who want exemption from the rules have seldom been physically harmed. They are invariably single mothers who have used accusations that everyone knows are fabricated in family court to eliminate the children’s fathers from the presence of their own children. Having committed one crime with impunity (knowingly false criminal accusations), it is hardly surprising that they consider themselves exempt from immigration restrictions and, indeed, from all laws and rules.

So why can Attorney General Jeff Sessions not say all this and use it to articulate a coherent defense of his administration’s policies? Because, as the highest law-enforcement official in the land, he presides over this whole unconscionable and unconstitutional system of perverted justice and so is ultimately responsible for it. It is his colleagues in the bar associations that are making a killing off the systematic separation of children from their parents and the unjust criminalization of their parents. Perhaps it is not surprising that his feeble utterances on this matter have been embarrassing gibberish.