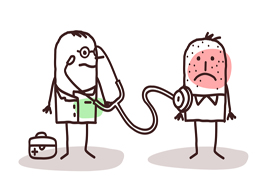 For the past three months or so I have suffered from, or at least experienced, a condition called discoid eczema on the instep of the sole of my right foot. It is always satisfying for a doctor to diagnose himself: I remember once examining my own blood for malaria, and my delight at finding it.

I had similar eczema more than thirty years ago, which remitted spontaneously, never until recently to return. It is not now very troubling and it behaves exactly as the textbooks say it should, for example by itching at night. I, of course, behave exactly as the textbooks advise against; that is to say, I rub the eczematous patch vigorously to relieve the itch. The immediate relief is such that I am almost disappointed when the eczema fails to itch, for then there is nothing to relieve.

I do not mention this slight infirmity as an appeal for sympathy. Hundreds of millions of people in the world suffer incomparably worse than I, at the very moment I write this, and are therefore more deserving of sympathy. No; I merely want to make a philosophical point, namely that the world is, and ever will be, full of insoluble or unsolved mysteries, whatever our pretensions to absolute understanding.

“There is an infinity of things about the past that, even in principle, can never be known.”

According to the textbooks, dry skin predisposes to eczema of the discoid kind, but that only pushes the question one step back: Why dry skin? Besides, no one claims that dry skin is the whole explanation; not everyone with dry skin suffers from discoid eczema.

There is also a genetic predisposition to the condition, no doubt, but that is unlikely to be the whole explanation either. Perhaps some combination of the two factors explains the condition in my case?

But that leaves many questions unanswered. Why has it returned now, after an interval of a third of a century? I doubt that my skin is any drier now than it was, say, twenty years ago, and in any case the hypothesis that it is drier is impossible to test.

My psychological state, perhaps? But what psychological state, exactly? I am not aware of any particular stress at the moment, let alone a stress in common with any that I suffered more than thirty years ago. Sometimes I worry a bit about the possibility of a world economic collapse that would leave me destitute, and sometimes I recall that nearly seven-eighths of my life is over, actuarially speaking. The turn of the millennium seems to me only a moment ago, and I can expect, statistically, to live only a similar moment longer. But most of the time I live as I have always done; that is to say, as if life will never end. I do not think that my eczema is a dermatological memento mori.

But even if it were, it would still not explain certain facts about it. Why does it affect the sole of my right foot and nowhere else? What is special about that area of my body that it should be the site of this condition? And why are there four little patches of it and not, say, three or five or seven? Why does only one of those patches ever itch, and then only sometimes?

I suppose someone might reply that in principle these not-very-compelling mysteries could all be solved. I am not actually sure that this is so; for example, even histological examination establishing a difference between the four eczematous areas and the surrounding skin would not solve any of them. A very elaborate theory indeed would have to be propounded to cover just the few mysteries that I have evoked. But let us for a moment grant that, if they were studied long and hard enough, all these little mysteries could in theory be solved, that a moment could come when there was nothing left to ask because everything was known. In practice, no one ever would solve them because the time and effort required would be completely disproportionate to the knowledge gained by doing so. In other words, I must live with these mysteries and will go to my grave not knowing the answer or answers to any of them.