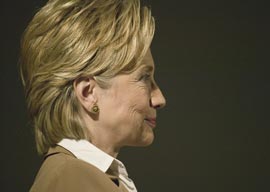 The hubbub over last week’s election in Israel is another reminder of why the Democrats have pinned all their 2016 hopes on Hillary Clinton. The Democrats are planning a coronation rather than a competitive donnybrook (like the one the Republicans seem to be ginning up) because a genuine battle in the primaries would expose the intraparty acrimony inherent in the Democrats being the Coalition of the Fringes. In particular, getting most Democrats to assume upfront that Hillary is inarguably the rightful heir to the throne in 2016 should paper over for four or, ideally, eight years the looming Democratic crack-up over Israel and Jews.

While not very significant as a voting bloc anymore, Jews have long furnished the Democrats with much of the Party’s campaign funds and media muscle. But a massive long-run problem for Democrats is that American Jews tend to be liberal about America but conservative about Israel.

Moreover, the appalling anti-Semitic Muslim terrorism in Europe is finally persuading some American Jews to question their schmaltzy complacency that mass immigration into predominantly gentile countries is always “good for the Jews.” These developments make American Jews increasingly uncomfortable with the Democrats” People of Color coalition of the resentful.

Just before last week’s Israeli election, Democrats had half-talked themselves into believing that the Republican-aligned Bibi Netanyahu would be voted out of office, thus temporarily ameliorating the Democrats” Jewish Problem.

If the Israeli parties aligned with the American Democrats had won the election, they’d have fired ex-bouncer foreign minister Avigdor Lieberman and hired somebody suave and cultured, somebody like Cambridge-accented Abba Eban back in the day, who would then make even the more liberal American Jews feel good again about supporting Israel.

“Hillary, of course, is almost as much of a wholly owned subsidiary of Saban Brands as the Power Rangers.”

Of course, the facts on the ground wouldn’t change much under a Labour-led coalition because the main difference would be rhetorical. Likud-led coalitions like to be brusque because it’s fun to offend people, and brusqueness is part of what being a Sabra is all about. Labor-led coalitions, in contrast, like to sound respectable to American Jews, so they phrase their demands more politely. But, in the big picture, not much changes from one government to another in Israel besides the tone of voice. Had Netanyahu lost, most liberal Jewish Americans might have immediately come to assume that all was well because the right people (i.e., the left people) were back in charge.

Bibi, however, earned his fourth term, crushing the leftist coalition 67-39 among the 106 Jewish seats. Granted, the 14 seats won by Arab parties made the election look closer on paper. But Israel has an unwritten rule that it would be racial treason for a Jewish coalition to form a governing majority using Arabs, so Arab voters don”t really count in determining who gets to be prime minister.

While America’s immigration policies make this country more leftist, Israel’s demographic policies, such as inviting in French Jews who feel threatened by Muslim immigrants in Paris, and banning non-Jewish immigration (other than spouses), means that the Jewish electorate is growing steadily more rightist.

As Israel comes ever more out of the closet as the successful right wing nationalist state that it is, a PR problem is created for American Democrats. The success of pacesetting at California campuses by the anti-Israel Boycott, Divestiture and Sanctions movement would suggest this. The student candidates who make up the next generation of Democratic politicians tend to see Israel as the quintessence of that white privilege that young people are taught to hate.

Beyond Israel, American Jews are starting to worry that the anti-white, anti-privilege rhetoric they”ve done so much to inculcate among today’s youth will end up boomeranging against the most privileged white American ethnic groups: themselves.

We”ve been hearing from Democrats nonstop since 2012 about the hideousness of White Privilege. Yet, you can”t get much whiter than Hillary or more privileged than being a former First Lady. But the point, Democratic publicists insist, is that she’s a woman, and it’s the turn of women, even a white woman like, say, Hillary. By making the 2016 election all about the not very controversial issue of America electing a woman President, the Democrats hope to kick these divisive demographic cans down the road for eight years.

As you may have noticed, the Democrats, despite their vaunted vibrant diversity, don”t really have a Plan B. They just hope to nominate the old, bland white person and hope she doesn”t fall down and bang her head again (as she did in 2012, putting her out of action for close to six months). If Hillary isn”t up to scratch, however, the Party of the Fringes could attain its destiny and go full circular firing squad on itself as early as next winter.

A key for Democrats is hanging on to the smallest but most influential ethnic constituency: Jews. It’s widely believed (although not often talked about) that Jews contribute about three-fifths of the Democrats” campaign funds and about one-quarter of the Republicans” money.

In the New York Times Magazine, Jason Horowitz worries: “Do the Democrats and Israel Have a Future Together?“ He interviews Norman Podhoretz’s son-in-law Elliott Abrams, who wrote a book about the threat posed to American Jews by shiksas wanting to marry them and who ran the Bush Administration’s Middle Eastern policy:

What really concerned him, he said, were the non-Jewish voters who make up the rank and file of the Democratic base. “Look, I”m Republican,” Abrams told me. “But the problem that no one wants to talk about is the erosion of support in the Democratic Party.”

The full scope of Jewish achievement in American life was summarized two decades ago by Seymour Martin Lipset, a Senior Scholar of the Wilstein Institute for Jewish Policy Studies, and Earl Raab, Director of the Perlmutter Institute for Jewish Advocacy at Brandeis University:

During the last three decades, Jews have made up 50% of the top two hundred intellectuals, 40 percent of American Nobel Prize Winners in science and economics, 20 percent of professors at the leading universities, 21 percent of high level civil servants, 40 percent of partners in the leading law firms in New York and Washington, 26 percent of the reporters, editors, and executives of the major print and broadcast media, 59 percent of the directors, writers, and producers of the fifty top-grossing motion pictures from 1965 to 1982, and 58 percent of directors, writers, and producers in two or more primetime television series.

Has there been much decline since then in Jewish influence? I don”t see strong evidence of it outside of Congress, where Jewish representation has started to decline as immigrant groups add strength through the sheer number of warm bodies. The count of Jewish members of Congress has recently declined from 2009’s peak of 45 to 2015’s 28.

Still, being a member of the House is a fairly lousy job compared to, say, being a member of the Forbes 400. Among the 400 or so billionaires in America, Jewish membership has been stable in the 130s for the last few years, a remarkable accomplishment considering that Jewish ethnic activist organizations estimate that Jews make up only about two percent of the American population.

The largest growth in the American population since Lipset and Raab wrote in 1995 has come from Hispanics, who, with the exception of Cubans like Ted Cruz and Mario Rubio, are not much competition in elite fields. East Asians are more ambitious, but they tend to stick to STEM careers with little cultural sway. South Asians and elite immigrants from the Muslim world, though, are more verbally facile and thus more worrisome to Jewish interests.

Still, there has also been a countervailing influx of Persian, ex-Soviet, and Israeli Jews, such as Clinton mega-donor Haim Saban, a former Israeli solider and present proprietor of the dominant Spanish-language Univision network.