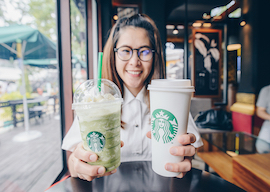 JACKSONVILLE—First Starbucks had that incident in Philadelphia where two guys were arrested, in handcuffs, for loitering in a Starbucks, raising the philosophical question:

Is it possible to loiter in a Starbucks?

If we were to strictly interpret the definition of loitering—we should ask the judges on the Third Circuit for a clear-cut opinion—wouldn’t everyone inside a Starbucks be loitering, like, all the time?

I’m not even talking about the guys in French shirts who throw their backpacks onto the wood-paneled bench and take up two cocktail tables with their laptop and accessories for seven hours while they finish their indie screenplay set in Belize. I’m talking about people just waiting on their coffee.

First of all, there is no place to wait on your coffee.

Whoever sold you the Cocoa Cloud Macchiato with toffee nut syrup and a mocha-caramel drizzle has made some vague hand motion indicating “Wait over there for your barista to mix, stir, froth, and inject this son of a bitch,” and so you kind of wander toward the other end of the Concoction Preparation Area, hoping not to annoy the 37 other people who are also searching for the perfect tactical position, so that you’re close to the plank where the coffee seems to be plunked, but not so close that you’re hogging real estate that rightfully belongs to someone who ordered a Cinnamon Dolce Crème 45 minutes ago. If you took a picture of your favorite Starbucks at this moment, it would be a picture of…loitering.

“It makes sense once you consider the intense cattle-prod stimulation of the whole Starbucks System.”

But scarcely had I finished my show in Tempe, Arizona, last week than a new Viral Starbucks Scandal erupted just footsteps from my theater. Six Tempe police officers went into their favorite Starbucks to caffeine up prior to their shifts on the Fourth of July, a day when drunken chaos reigns, and one of the baristas pulled them aside and said that a customer was extremely uncomfortable in the presence of police officers and so could they please either move out of the customer’s line of sight or exit the premises. The officers left the building, uncaffeinated, then, of course, talked about it, setting off warring factions on Twitter, with half the people wanting to #DumpStarbucks and the other half saying that “in these days of police brutality…” blah blah blah.

So I ask the question: What would you think if someone turned to you and said, “I can’t deal with all these cops in here. They’re freaking me out.”

You would think, “Bless your heart, you must have outstanding arrest warrants.”

You’re talking to a person who probably committed a felony, like, this morning. The proper thing to do—and I’m sure this is in the Starbucks Human Resources Manual—is to help the customer escape out a back entrance before anyone asks for his eyedee.

Of course, the first few days after the incident were full of apologies from Starbucks, calls for “dialogue,” encomiums to our men in blue and the great job that they do. I’m waiting on the “sensitivity training” for “cop profiling” since what the customer was saying, really, was “If I see any guy in a uniform, I assume it’s one of those whackjobs who pull black men over for no reason and then look for a reason to kill ’em.” Hey, they never identified the person who got triggered—maybe the customer was Colin Kaepernick!

At any rate, you have to wonder whether “That guy triggers me” has now become a thing. Can you call the barista over and say, “I can’t deal with this many Italians in one place. They order that stuff with the Cascara Cold Foam on the top and then they slurp the foam.” Does the barista then walk over to the Italian bachelor party and say, “Hey, you guys have to move out of the line of sight of this Irishman over here”?

Of course you can’t. The trigger policy apparently only applies to cops—although I’m guessing it might also extend to Army guys and Marines, but probably not Navy enlistees since their uniforms are cuter. What if a gaggle of UPS guys came in wearing the worst uniforms ever designed—I mean, come on guys, really? you call that symphony in dull brown a uniform?—and it became unbearable to an editor at Vogue? “Pardon me, Miss, but I think I may regurgitate my Mango Dragonfruit Lemonade Refresher if these hooligans don’t remove themselves.”

My theory about both incidents—the loitering in Philadelphia and the hallucinatory law-enforcement experience in Tempe—is that the baristas themselves are going insane. Every day they have to deal with customers who start out by giving nineteen instructions about how to prepare a cup of coffee, so by definition their entire universe consists of people who have Obsessive Compulsive Disorder. Then they have to activate seven different machines to prepare that coffee, because their insane corporate office decided at some point that the steaming thingy can’t be next to the drizzle thingy and has to be seven feet away from the grinding thingy. Then they have to deal with a horde of anxious commuters who are watching them like a hawk because the three-seventy-nine they just spent on a cup of coffee entitles them to make sure that every detail of their obsessive-compulsive preparation list is adhered to. And, of course, since all these people are by definition waiting on caffeine, they’re nervous, edgy, and scanning the horizon for empty chairs, since the other quaint thing about Starbucks is that there are never any places to sit.

It’s like some Stimulus Response Research Team at the Harvard Institute for Psychotronic High-Strung Tension designed an experiment to see how many nervous people you can cram into one small space, so that eventually one of the laboratory rats erupts in bizarre behavior.

“Arrest that guy for loitering!”

“Get rid of those blue uniforms!”

It makes sense once you consider the intense cattle-prod stimulation of the whole Starbucks System.

The baristas are our friends. Hug them. Bring them cookies. They’re really on our side. The last thing they want is Viral Incidents, because they’ll do anything to avoid another day of Sensitivity Training.