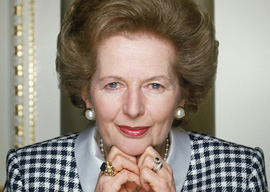 In 1999, I was interrogated on suspicion of being an Irish Republican Army terrorist plotting to assassinate Baroness Margaret Thatcher with a letter bomb.

I was startled by a phone call from the police chief of the Maryland town where the former prime minister was going to attend a conference that weekend. He said, “The bomb squad’s robot just about to throw this heavy package addressed to you at the hotel into the Chesapeake, but then I figured I’d give you a call to find out if you can explain what it is.”

This was not wholly unreasonable because in 1984 the IRA had blown up Mrs. Thatcher’s hotel in Brighton the night before the opening of the annual Tory convention. Undaunted, she delivered her opening address on schedule at 9:30 AM. Afterwards, the IRA announced with sinister reasonableness, “Today we were unlucky, but remember we only have to be lucky once. You will have to be lucky always.”

I finally grasped what the chief was talking about and fulsomely attested that the package for me was not, actually, plastique. As a speaker at the conference, I had paid a printer to do up 1,000 new business cards and FedEx them to the hotel. After about ten minutes of discussion, the poor cop was finally convinced that tearing open my parcel wasn’t going to leave only a smoking crater behind.

What’s fascinating is the IRA-like level of hate directed at Mrs. Thatcher over the last 40 years by the British arts and entertainment caste. (It’s worth mentioning the small number of British artists with the independence of mind and courage to support Mrs. Thatcher: off the top of my head, I can think of Tom Stoppard, Mick Jagger, David Lean, Alec Guinness, John Gielgud, Kingsley Amis, and Philip Larkin.)

“She was the most forthright public figure of her age, the least politic of politicians.”

Among American politicians, only Nixon elicited as much rage from literati, and that could be semi-excused by their aversion to Nixon’s cunning personality. But Thatcher was Nixon’s opposite in deviousness: She was the most forthright public figure of her age, the least politic of politicians.

At the Heritage Foundation conference in 1999, I sat during Mrs. Thatcher’s after-dinner address with General William Odom, the former head of the National Security Administration who later became the leading military voice against the Iraq invasion. Odom, who had spent eight years in West Germany with the US Army, leapt up during the question-and-answer session to grill her over her worries about German reunification after the fall of the Berlin Wall in 1989. (Mrs. Thatcher, who spent her adolescence getting bombed by a unified Germany, had warned fellow European leaders in December 1989: “We defeated the Germans twice. And now they’re back!”)

Afterwards, the Baroness walked over to our table to resume her argument with Gen. Odom over German unification. They went at it like a baseball umpire and manager quarreling over a play at the plate. I sat there wide-eyed. Finally, Odom said something like, “During the Revolutionary War, my ancestors hid behind trees and shot your ancestors wearing those stupid redcoats!” Mrs. Thatcher laughed and invited all of us to accompany her to the bar, where she and Odom shot the breeze amiably for a couple of hours.

(Was German political reunification a good idea? Like Chou En-lai’s opinion of the French Revolution, all I can say is that it’s too soon to tell. But we know now that Mrs. Thatcher was absolutely right to keep Britain out of the ruinous euro project bonding the BMW 7 Series of the German economy to the Vespa scooter of the Southern European economies.)

It’s difficult in 2013 to grasp how different the world was when Mrs. Thatcher became prime minister in 1979.

Consider taxes. The top marginal tax rate in Britain was an absurd 83 percent on earned income and 98 percent on investment income. Today, England is often the first choice of residence for the global rich, but in 1979 even many English rock stars were tax exiles. Thatcher cut the top bracket to 40 percent, jolting the British economy.

During the 1979 Winter of Discontent that led to Thatcher’s election, Britain was falling apart. Ray Davies memorialized this era of work stoppages and inflation in The Kinks’ 1979 heavy metal-disco song “Superman:”

The chaos during the last Socialist government, in which garbage piled up on the streets and even corpses weren’t buried because government gravediggers were on strike, stemmed from the ruling party’s fundamental financial conflict of interest. The Labour Party had been founded to represent the trade unions’ interests. But after the nationalization of the major industries, Labour governments wound up in wage negotiations with fiduciary responsibilities to both the owners (theoretically, the British public) and to the employees (union members) to help them extort as much in wages and goldbricking as possible.