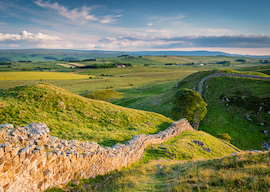 One of the most fashionable manifestations of Trump derangement syndrome—the assumption that Walls Never Work—is crushingly debunked in historian David Frye’s eye-opening history of 4,000 years of barrier-building, from the Fertile Crescent to the Malibu Colony, Walls: A History of Civilization in Blood and Brick.

In a brilliant epilogue entitled “Love Your Neighbor, But Don’t Pull Down Your Hedges,” Frye points out that, ironically, shortly after the 1989 fall of the Berlin Wall made anti-wall triumphalism the unchallenged conventional wisdom, the world quietly entered its Second Age of Walls. (The first ran from prehistory up to the proliferation of cannons in the 1400s.)

Years before Donald Trump pointed out the utility of border barriers, governments around the world and private landowners (especially in “sanctuary cities”) had already embarked on a new spate of wall-building to keep out terrorists, immigrants, and criminals.

(Frye dismisses as a “largely meaningless semantic distinction” the recent shibboleth that “walls” are intrinsically evil while “fences” are not to be noticed.)

India, Saudi Arabia, and Israel, for example, have recently enclosed much of their perimeters. Frye observes that although Barack Obama dismissed border walls as “wacky” in 2016, his administration subsidized Jordan and Tunisia to construct their own strategic lines to protect themselves from the chaos of the uprisings Obama had supported in Syria and Libya.

Thus, Walls concludes with a quick history of the gated communities favored by Hollywood celebrities, such as the Malibu Colony, Hidden Hills, and Beverly Park.

Of course, where there are no neighborhood walls, there will tend to be walls around yards, often with broken bottles on top.

Granted, in the United States, the Jeffersonian tradition was to defend the country with a strong navy, which allowed, among many other benefits, houses to have open front lawns. But traditional American neighborliness seems racist now, so we’ve undertaken to import millions of people from more clannish and hostile cultures.

“Why are critics of walls constantly denouncing them as cowardly?”

In the San Fernando Valley, for instance, you can tell the neighborhoods where the ex-Soviet Armenian newcomers are pushing out the old Chicanos because the Armenians disdain the Mexicans’ glass shards and instead invest in elaborate iron fences with lethal finials to impale intruders.

Frye, who did archaeological research on Hadrian’s Wall in Britain, argues that historians have long systematically underestimated the importance of walls. He compares this myopia to how anthropologists before Napoleon Chagnon’s The Fierce People and Lawrence H. Keeley’s War Before Civilization: The Myth of the Peaceful Savage were naive about the centrality of violence in prehistory.

Frye retells the history of the world up through 1453 as a conflict between the barbaric warriors of the wasteland and the civilized wall-builders:

How important have walls been in the history of civilization? Few civilized peoples have ever lived outside them.

In Walls, history doesn’t exactly repeat but often rhymes in fun-house-mirror ways. For example, the book begins with a 220-kilometer wall built at least 4,000 years ago on the edge of the Syrian desert to guard the civilized farmers from the predatory nomads, not far from the effective divide during the recent Syrian civil war between the Assad government and ISIS.

Today, we are supposed to hate walls and love bridges. Bill Clinton, for instance, campaigned in 1996 on the slogan of “building a bridge to the 21st century,” and his library in Little Rock is shaped like a bridge to nowhere. The Washington establishment mindset has long been invade the world/invite the world.

In Frye’s account, however, the bridge-builders, such as the second-century Roman emperor Trajan, who built an imposing bridge over the Danube to attack the Dacians, are the bullies. In contrast, the wall-builders who mind their own business, like Trajan’s more prudent successor Hadrian, are seen more sympathetically. Granted, the wall-builders sometimes got carried away and spent too much, as countless Chinese peasants complained about their wall-building emperors. But at least they weren’t the genocidal Genghis Khans trying to get in.

“Good fences make good neighbors” experienced early retirement. In its place came the untested phrase, “Build bridges, not walls.” If nothing else, the new slogan seemed designed to give military historians fits. Throughout history, bridge building had been recognized as an act of aggression. Since at least the time of Xerxes bridging the Hellespont, Caesar the Rhine, or Trajan the Danube, bridge building had preceded invasions….

In Walls, bridges are emblems of aggression. For instance, during the siege of Constantinople in 1453:

The city’s seaside defenders watched with horror as Turkish sailors lashed together their boats to form a pontoon bridge spanning the Golden Horn. For the defenders of Constantinople, as for countless people before them, there was nothing more comforting than a wall, or more terrifying than a bridge.

Frye also recounts the catastrophic A.D. 376 decision by Roman emperor Valens to let Goth barbarians, fleeing the Huns, cross the Danube into the empire. In a prefiguration of Chancellor Merkel’s 2015 demand that Prime Minister Orban’s Hungarian government let the Muslim hegira cross the Danube, Valens believed that the refugees would enrich Rome’s economy.

In a thrilling chapter, Frye tells of the famous end of the First Age of Walls in 1453. A mercenary Hungarian metallurgist named Orban cast for the Ottoman Turks at Adrianople a vast cannon. The Muslims dragged “the horrible bombard” to Christian Constantinople’s walls, in which, after a millennium of successful resistance, they pounded a breach and then enslaved the populace.

Gunpowder wasn’t the end of strategic lines, however. Long plagued by Muslim slave-raiders from the Eurasian steppe, the czarist Russians methodically extinguished the barbarian threat with a dual approach: Extensive defensive lines of wood and dirt were slowly pushed forward behind the attacks of the Cossack cavalry (Christian runaways who had adopted the horseback lifestyle of their nomad enemies).

An easily overlooked reason that walls were so omnipresent in separating civilization from barbarism was that the nomads of the Eurasian steppe had two main advantages: They were tougher than civilized men and they possessed vast herds of horses that flourished on the Eurasian grasslands. We are constantly lectured today that a 50-foot wall will be overcome by a 51-foot ladder, but horses didn’t like ladders.

By the early 20th century, however, the civilized powers were developing vehicles, such as trucks and airplanes, even more mobile than horses. It’s now easy for a small number of defenders to monitor a long wall. Hence, building effective barriers and manning them is now relatively cheaper than in the past. So, many countries around the world are building new border defenses to keep out unwanted outsiders.

But here in America, we are supposed to believe that a technology that worked for Constantinople for a millennium against the greatest armies of the age can’t possibly keep out migrant fruit pickers.

Throughout Walls, Frye tries to explain the psychology of this bizarre anti-wall belief system.

One famous people that chose to live without walls were the Spartans, who felt that physical security made men decadent. “They opted for a forced, artificial barbarism over high culture.” Frye repeatedly observes that a lack of walls means a lack of diversity within society. In Sparta, as in most barbarian tribes beyond the walls, virtually each male citizen must have no profession other than war.

In contrast, the Athenians built long walls to protect their access to their port, behind which their men diverged into a dazzling variety of jobs, such as philosopher, playwright, sculptor, architect, and historian. As Frye repeatedly documents, walls mean economic diversity and cultural progress. In contrast, a lack of secure borders means merely the war of all against all.

When Frye’s attention turns to the New World, he finds the same patterns. In the wall-building civilizations of the Mayans and Incas: specialization and advance. Among the unwalled Indian braves of North America: warlike homogeneity.

They were as different from one another as the ancient German was from the Gaul, Hun, Mongol, or Turk—which is to say, they were hardly different at all. They were all warriors, just like their unwalled counterparts in Eurasia, and utterly unlike the wall builders of South and Central America.

Is Frye overstating? Perhaps. Countless civilized people have admired various barbaric cultures, at least once they were no longer a danger. But it’s an interesting perspective. He goes on to make an audacious claim:

Mulling over the American evidence, comparing it to that from another side of the globe, one wonders if we have detected a glimpse of that skittish unicorn so fervently hunted by social scientists: a hint of universality, evidence that perhaps human societies everywhere tend to fall into the same patterns of development…. One path, beginning with walls, had led to writing, architecture, astronomy, and math. The other, open and unwalled, led only to militarism.

Walls ends with a brief meditation on why anti-boundary prejudice remains so appealing in the current year, despite its manifest failures to make real life less poor, nasty, brutish, and short. Why are critics of walls constantly denouncing them as cowardly?

Are we forever building “monuments to fear”? It strikes me as an ironic testimony to the lingering influence of our primitive warrior past that cowardice remains the harshest and most stigmatizing opprobrium that can be cast on another human being. Those are fighting words, or would be if we weren’t so afraid to fight.