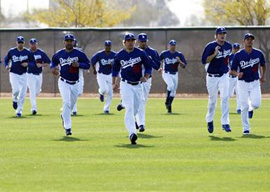 March 28 saw a springtime ritual that rivals or even surpasses Easter in many Americans” hearts: The baseball season opened.

Despite the many differences”real and imaginary”between LA and the rest of the country, in this area we are as American as apple pie. Los Angeles loves its Dodgers. Old transplanted New Yorkers may resent the team’s desertion of Brooklyn“s Ebbets Field, and similarly aged Angelenos whisper darkly of the corruption that allegedly surrounded Chavez Ravine“s bulldozing to make way for Dodger Stadium. But for most of us, loyalty to “Dodger Blue” is part of what little common identity this city’s residents have.

That loyalty has been severely tested in recent years. The divorce struggle between the battling McCourts over the team’s ownership, the baseball commission’s intervention, and an atrocious beating at Dodger Stadium (and the general decline in safety and standards there) have combined to dim the home team’s glimmer. Local radio shows have united in denouncing Frank McCourt and his estranged wife as greedy parasites without any care for either the Dodgers or Los Angeles all through their divorce proceedings. But this year in Los Angeles, the baseball season’s opening is occasion for general rejoicing.

A consortium led by Peter Guber, whose public face is former basketball star Magic Johnson, has announced the team’s purchase from the hapless McCourt”who nevertheless will walk away with over a billion dollars. There is joy indeed in Mudville, for its favorite focus of athletic hate has struck out. On radio the callers have been universally joyous.

If the revamped Dodgers manage to rekindle the excitement lost over the past several years, it will improve the city’s mental health.

As with the Lakers (whose home victories often spark riots among fans), the local patriotism bound up with the team is not simply the ordinary affectation of sports enthusiasts. Despite the growth of popularity in soccer here corresponding to the ever-larger Hispanic population, the new arrivals have embraced the Dodgers as a sign of loyalty to their new city. While this hardly counts as a sign of assimilation, it is interesting that team affiliation is the one thing that bridges the culture gap.