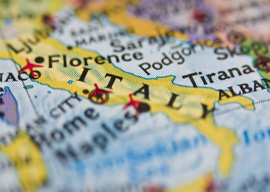 The word “Italians” conjures up a number of epithets. Take, for example, “Corrupt Bastards.” The Italians are mired in corruption. This is either despite or because of the fact that they are Catholics and their equivalent of royalty is the Pope.

But if you ask an Italian why Italians are so corrupt, he will leap to his own defense and insist: “I”m not”it’s the others.” He”ll blame the politici and the ricchi. So you say: “Oh, come off it! You”re up to your necks in it, the lot of you!” And he will maybe come clean but then trot out the old Italian proverb invented specifically to defend his nation from this very charge: “Ma tutto il mondo Ã¨ paese (But all the world is the same town).”

But the world isn”t, is it? One simple example among all the many different forms of corruption, and one that shows how far down the food chain the rot goes in a nation, is tax evasion. The Italians are world-beaters in this minor branch of the corruption industry. You know that there is something odd about a country when, if a client should leave a bar without a printed receipt for his caffÃ© macchiato or calice di Chianti, the bar owner commits a crime.

I know what constitutes moral and immoral behavior, but I know little about the technical side of mortal sin. So I was very pleased to discover that many prominent Catholic theologians agree with me on tax evasion”those, that is, not yet possessed by l”Astuta Serpe Satan and his army of demons, AKA Partito Comunista Italiano, whose toxic derivatives infest Italy’s every nook and cranny.

Possessed Catholics, on the other hand, known as cattocomunisti, and their theologians are adamant: Tax evasion is a sin because it is theft and involves lying and so is in breach of the seventh and eighth commandments.

Balderdash! How can I steal my own money?

No one likes paying taxes, but in a properly functioning democracy most people pay them on the basis of give-and-take. And most agree that it should be a crime not to pay them.

Italy, however, is not a properly functioning democracy. According to Ignazio Visco, governor of the Bank of Italy, the tax increases and new taxes the Monti government is drip-feeding into Italians” lives will raise the tax burden to an unsustainable 45%. This compares to a tax burden in America of around 27%.