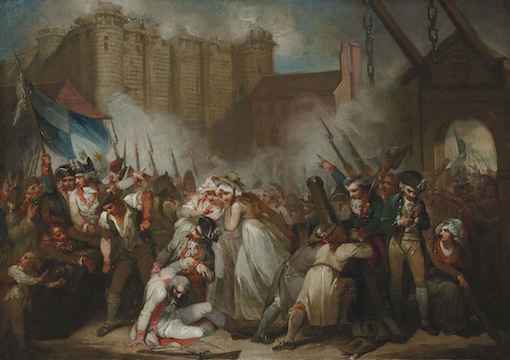 The Storming of the Bastille

This Tuesday, the French celebrated Bastille Day, the mob attack on a Parisian prison that has come to symbolize the French Revolution, a period of massive violence that produced nothing other than a lot of dead Frenchmen. Their revolution was the screech of a mob, much as we are seeing in several of our own cities and towns today. So let’s review this absurdly celebrated event.

As is common with mob violence, the storming of the Bastille was set off by a rumor. People began to whisper that the impotent, indecisive king, Louis XVI, was going to attack the new legislative body, the National Assembly.

— Hands Up! Don’t Shoot! (Even Eric Holder’s Justice Department found that claim was a lie — after multiple millions in property damage and human suffering.)

— Mass protests over police killing an innocent black man in Detroit! (Turns out, Hakim Littleton was firing a gun at them.)

— Althea Bernstein’s face was burned with lighter fluid and a match thrown at her by four “classic Wisconsin frat boys”! (After initial flood-the-zone coverage, that story sure disappeared fast.)

In need of weapons to defend themselves from the imaginary attack, on the morning of July 14, 1789, about 60,000 French citizens armed with pikes and axes assembled at Les Invalides, a barracks for aging soldiers, to demand weapons and ammunition.

— As Sens. Mitt Romney and Marco Rubio can explain to you, antifa carry rocks, incendiary devices and bicycle locks only to defend themselves from “fascists.”

Eventually, the mob broke through the gate of Les Invalides and ransacked the building, seizing 10 cannon and 28,000 muskets. But no ammunition. So they headed for the Bastille, which had once been a fortress.

The rabble feared the Bastille because of false rumors of political prisoners being tortured behind its walls. In fact, the Bastille held only a half-dozen prisoners that day, most of them common forgers. They were not being tortured, and the prison was in the process of being shut down, anyway.

With legions of Parisians banging on the gates of the Bastille, the prison’s commander, Marquis de Launay, invited representatives of the people inside to negotiate over breakfast.

— Sure, I’m the chief of police, but I’ll take a knee. That will shut them up.

Their first request was that the cannon be removed from the towers because mounted guns frightened the people. De Launay agreed, and the cannon were withdrawn.

“As is common with mob violence, the storming of the Bastille was set off by a rumor.”

But the mob outside interpreted the cannon’s disappearance to mean that they were being loaded, about to fire into the crowd! For some reason, they also believed their representatives, lingering over breakfast, had been taken hostage.

As the mob grew, the Bastille’s guards told them to disperse, shooing them away by waving their caps. The people interpreted the waving of hats as encouragement to continue the attack. And so it went, with periodic gunplay interrupting de Launay’s attempts to surrender.

Soon, the mob was firing cannonballs at the prison, hacking at the drawbridge and scaling the courtyard walls.

Facing tens of thousands of these lunatics, de Launay made a final offer: He would cede total control of the Bastille, provided only that the transfer be accomplished peacefully. Unless his demand for a bloodless transition was met, he said, he would blow up the entire city block. Which, it turns out, he should have.

The mob poured in and ransacked the entire fortress, throwing papers from the windows, killing guards and taking others prisoner. One captured guard later described being marched through the street with “masses of people shouting at me and cursing me.”

— At least we haven’t seen any masses of people shouting and cursing at law enforcement officers.

Much worse was in store for de Launay. The Bastille commander was triumphantly paraded through the streets, where the people cut him with swords and bayonets until he was finally hacked to death, whereupon the charming Parisians continued to mutilate his dead body. A cook was given the honor of cutting off de Launay’s head, getting down on his hands and knees in the gutter and sawing it off with a pocketknife.

De Launay’s head, along with that of another city official, were stuck on pikes and waltzed through the streets of Paris for more celebratory jeering.

— News this week: White Indianapolis woman’s Facebook page flooded with mocking messages from BLM supporters after she was murdered for saying “All Lives Matter.”

— Also this week, Savannah Chavez’s tribute to her fallen police officer father, killed in an ambush on Saturday, was bombarded with sneering tweets from BLM supporters.

In reaction to the storming of the Bastille, Alexander Hamilton politely warned the Marquis de Lafayette, hero of the American Revolution: “I dread the vehement character of your people, whom I fear you may find it more easy to bring on, than to keep within Proper bounds, after you have put them in motion.”

Lafayette didn’t listen. Three years later, he was fleeing France for his life. I hope the Democrats have a better plan.