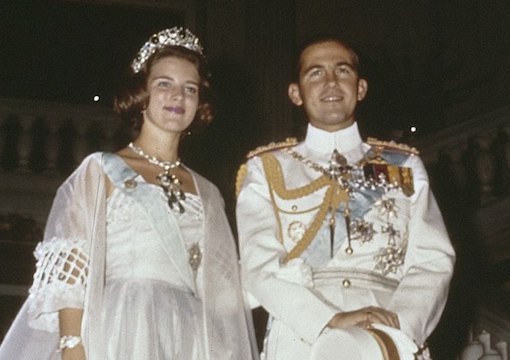 GSTAAD—It seems to be open season on royals, starting with Prince Andrew and the charges against him by Virginia Roberts Giuffre, a graduate of the Jeffrey Epstein finishing school. I’ve met Andrew a couple of times, but he wouldn’t know me from Adam. I’ve never met anyone who has had anything to do with Epstein except for Ghislaine Maxwell, who has problems of her own just now. Like everyone else, however, I have my opinions about this motley crew, and the word blackmail keeps looming. Lawyers have already killed some of my columns on this subject these past three years alone, so I better lay off the subject. What I am certain of I cannot publish, so I will write only what I am not cocksure about, and that is that the prince is a fool but no rapist.

Which brings me to ex-king Constantine of Greece, a friend of mine. An otherwise serious Athenian daily recently produced an extraordinary article asserting that, in 1976, the ex-king plotted to assassinate the then prime minister, Constantine Karamanlis. Let’s take it from the top: On April 21, 1967, a coup organized by three army officers overthrew the government and established a de facto dictatorship. The young king swore in the plotters after extracting certain assurances that the takeover would be brief and there would be no bloodshed. The king insisted that a civilian judge would head the government. On Nov. 13 of the same year, the young king attempted a countercoup once he realized the colonels had no intention of reverting to a democratic government. The countercoup was unsuccessful and he left Greece with his pregnant young wife and two children.

“Nothing about the king has moved me more than the fortitude he has displayed throughout these past 54 years.”

In July 1974 the colonels collapsed after meddling in Cyprus. Ex-premier Karamanlis—who had voluntarily left the country a long time ago—was recalled from Paris after assuring the king that he would pave the way for the monarch’s return. Karamanlis did nothing of the sort, in fact he betrayed the king and called for a referendum in which the king was only permitted to speak a few words via film to state his case. Constantine has been an ex-king since 1974. Now we read that the king plotted to have Karamanlis murdered and that the “British secret services” have tapes to prove it.

I wrote my first book, The Greek Upheaval, in 1975, and one thing I can guarantee is that if the king plotted against Karamanlis, I am Delilah of Samson fame. One version of the pressure put on the king the night of the 1967 coup had the colonels threatening the monarch that they would harm his ADC, Col. Michael Arnaoutis. The king has told me they never did. Now the Athenian daily has the same Arnaoutis plotting to assassinate Karamanlis. Reading carefully between the lines, perhaps Arnaoutis might have said something to that effect in conversation with friends, but nowhere does the king enter such conversation, nor is he ever involved in such outrageous plots.

The two-page article goes into minute details about the plot, ascribing words and situations to people now long dead. There are no quotes from a single living person; the assertions, instead, are based on “Information about confused plotting against the Greek Government that has recently come to the attention of the British authorities.” The pièce de résistance is that the British secret services have tapes and proof that a plot existed. In view of the fact that secret services do not respond to wild assertions, and that the article is ascribed to a “special correspondent,” I think that a Martian invasion is far more likely in the next two weeks than a grain of truth being in the article.

What puzzles me is, why now? The king’s properties, paid for by his family, were taken from him without compensation; he has endured years of exile and now lives quietly and not in the best of health in Greece; his sons and daughters have never put a wrong foot forward; and his queen, the queen of Denmark’s sister, has never stopped advertising the beauties of the land that has treated the royal family so shabbily. Mind you, Greek politics are very rough-and-tumble, and the Greek press has been known to be very yellowy at times. I was on the receiving end of some pretty gruesome charges when I wrote things the Greek media deemed anti-Greek, but all that is in the past. (Sixteen months’ imprisonment in 1975, not served, for libeling the Greek press.)

Yet nothing about the king has moved me more than the fortitude he has displayed throughout these past 54 years. He has endured lies, inventions against himself and his family, falsehoods about his actions, and distortions of his beliefs without ever retaliating, even in private. The reason for such Job-like sufferance is his great love for Greece and its people. So I ask again, why now? Why invent a nonstory about things that never happened long ago? I suppose monarchy causes envy and resentment, just like inherited wealth does. And while I’m at it, how can the Greek government have political prisoners as I write just because they are right-wing? Some of them are ex-members of Parliament who have never done anything wrong but belong to a right-wing party. Why doesn’t the “special correspondent” of that newspaper do something about them rather than invent stories about the king?