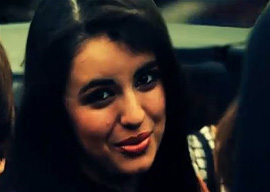 As an aficionado of the atrocious, I thought I”d sneak a peek at Rebecca Black’s song “Friday.” For those too engrossed in such small matters as Libya to notice, the song has been almost universally derided by “negative Nancies“ as “the worst song ever made,” “hilariously dreadful,” and “inept.” Even TIME shook its grizzled locks in disbelief.

The 13-year-old Californian chanteuse has been the target of innumerable scornful, bitchy, and even threatening messages from the music-loving mob. The song has gone viral with over 63 million YouTube views as of March 29, and despite all the criticism Becky doubtless has a career ahead. (She and the company have already earned some $1 million.) She has defiantly told critics she will not “give the haters the satisfaction that they got me so bad I gave up.” Nevertheless obviously stung, she performed an acoustic version to show she doesn”t rely entirely on Auto-Tune and has said she will donate some of her earnings to charity.

The song is thin, adenoidal, and accompanied by”what else?””the worst video ever.” But at least the lyrics contain chronological insights:

But life is not all partyin”. Important choices await we-we-we:

Kickin” in the front seat
Sittin” in the back seat
Gotta make my mind up
Which seat can I take?

And even before that dilemma, urgent tasks must be performed:

Gotta be fresh, gotta go downstairs
Gotta have my bowl, gotta have cereal

Thin gruel though “Friday” is, it is as good as thousands of other songs released every year. Had it not been for the hyperbole, I wouldn”t have paid it any attention”except to switch off the radio hastily if it took me unawares. The tune is catchy, Rebecca has a pleasant smile, her hedonism seems harmless, and the lyrics are at least as good as those of a lot of bands people idolize. “Friday” is certainly more meaningful than the much-vaunted U2’s “Elevation”:

I’ve lost all self control
Been living like a mole
Now going down, excavation
I and I in the sky
You make me feel like I can fly
So high….

Only feel like? But then Ms. Ciccone doesn”t care what people think of her lyrics, and she trills feelingly:

If you don”t like my attitude, then you can “F” off

Madonna is not the only performer-philosopher. In “Spice Up Your Life,” the Spice Girls point out sagely:

Speaking of spacemen, what vision does REM’s cerebral Michael Stipe adumbrate in “Man on the Moon”?

That is almost certainly the best song ever written about Fred Blassie.