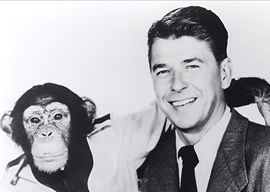 To celebrate Ronald Reagan’s 100th birthday, I watched his most derided movie, Bedtime for Bonzo. We”ve been hearing wisecracks about it for generations, so it has to be an embarrassment, right?

Bedtime for Bonzo turns out instead to be a small but nifty family comedy that was a deserved hit in 1951. The writers were disappointed that they couldn”t land Cary Grant for the role of a scientist who tries raising a chimpanzee as if it were a human baby. But it was indeed a Cary Grant-worthy idea. The following year, Grant (aided by Marilyn Monroe, director Howard Hawks, screenwriter Ben Hecht, and Esther the Chimp) portrayed a chemist testing youth elixirs on apes in Monkey Business.

Still, Reagan was well suited to play an idealistic and impersonal professor in Bedtime for Bonzo. But it’s funny how liberal Reagan’s character is”a progressive psychologist who believes in nurture over nature. Reagan proclaims that criminals are merely victims of having been “born and raised in a slum environment.”

The script has a surprisingly intellectual underpinning because one of Bonzo‘s writers, Raphael Blau, had been a graduate student in educational psychology and animal behavior under Edward L. Thorndike at Columbia. Bedtime for Bonzo sides with behaviorist psychologists such as B. F. Skinner, who were then ascendant over the old-fashioned Darwinian hereditarians.

“Tragically, young Bonzo died in a fire three weeks after his only film’s premiere, leaving him the James Dean of monkey movies.”

The premise is clever, especially compared to recent science-based comedies such as Human Nature, the incoherent 2001 flop penned by the normally brilliant Charlie Kaufman. Bedtime for Bonzo was inspired by the (inevitably comic) experiments of earnest psychologists such as Winthrop Kellogg and Catherine Hayes, who tried in the 1930s and 40s to raise baby chimps in their homes to see how human they would turn out.

Thus, Reagan is engaged to a lady professor who is the daughter of the college’s dean, an old-fogey geneticist who still believes in heredity. When the dean discovers that his prospective son-in-law’s estranged father was a habitual conman, he withdraws his daughter’s hand and asks: “But what assurance do I have that your children, my grandchildren, won”t inherit criminal tendencies?”