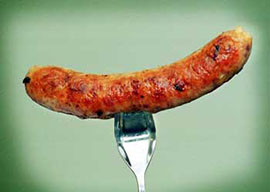 In Germany, much of the talk these days is about immigration and integration. It all started when former Bundesbank board member Thilo Sarrazin published a book in which he claims that the Bundesrepublik‘s mostly Muslim immigrant population is steadily forming a non-German-speaking, uneducated, ill-adapted underclass hooked to the welfare state but with little intention of adopting traditional German culture.

The faithful believers in multicultural dogma, which include most German journalists, academics, and politicians, felt deeply offended because the book pointed out a tendency which most people had noticed long ago. Sarrazin was forced to quit. Soon, Christian Wulff, the BundesprÃ¤sident“the German equivalent of a monarch, except he’s elected by politicians”was in Turkey delivering a speech in which he said that “Islam belongs to Germany.”

But this brought no end to the discussion; Sarrazin’s book was becoming ever more popular and the immigration question kept popping up, especially in the tabloid press. Chancellor Merkel then joined the debate, under compulsion, rejecting Sarrazin’s thesis while stating that multiculturalism in Germany has failed.

Since the immigration issue is becoming ever more tense, I figure I might offer some advice to those new to Germany, given that I myself hail from far away (Colombia, to be precise) and have adapted fairly well in two years to what was once a strange land.

First. Look the part. You can”t offend the natives if they barely notice you”re foreign. In my case this wasn”t difficult since my surname sounds German (it’s actually from Cumbria) and my skin is white. However, adapting to the environment was still necessary.

During my first week of university in Berlin someone asked me why I was dressed like an American student. As I looked at my rugby shirt, khaki trousers, and boat shoes, I realized the person had a point. I might as well have been wearing a Reagan campaign T-shirt, which in Berlin one wears at one’s peril, especially around May 1st, when ChÃ© Guevara paraphernalia becomes the de facto uniform amid the legions of rock-hurling radicals. My survival instinct kicked in.

After stopping by a few Kreuzberg thrift shops and some Mitte fashionista stores, I emerged a changed man: beaten Converse sneakers, skinny jeans, a plain white T-shirt (sorry, ChÃ©) under a pinstriped cardigan and a set of black, thick-framed spectacles. Perhaps the look wasn”t so manly, but I was soon stopped on the street and asked for directions in German by tourists from Hamburg.

The point is not that you have to turn into a Berlin hipster to adapt to Western European culture. I myself have reverted to old ways now that I know the territory. But just leave the burqa at home or, if you feel you can”t do without it, stay in Libya or Pakistan; the weather there is better anyway, except for the yearly biblical flood.

I don”t agree that wearing head scarves should necessarily be forbidden by law, but the first principle of respect for another culture, especially one that accepts you and grants you opportunities, is: When in Rome….

Second. Learn the language. The Germans are not the French, and they generally appreciate any attempt to speak their language that goes beyond “Ein Bier, bitte,” no matter how you might butcher it. I knew very little German before my arrival and once spent ten minutes trying to explain to a pharmacist that I didn”t need water (Wasser), but rather fiber (Faser). Don”t ask why. When he finally understood he said, “Ach so!” and told me I should”ve explained in English, a language Germans tend to speak fairly well.