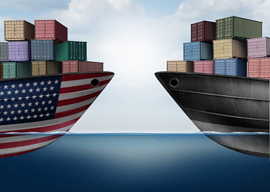 At the G-7 summit in Canada, President Donald Trump described America as “the piggy bank that everybody is robbing.”

After he left Quebec, his director of Trade and Industrial Policy, Peter Navarro, added a few parting words for Prime Minister Justin Trudeau:

“There’s a special place in hell for any foreign leader that engages in bad faith diplomacy with President Donald J. Trump and then tries to stab him in the back on the way out the door. … And that’s … what weak, dishonest Justin Trudeau did. And that comes right from Air Force One.”

In Singapore, Trump tweeted more about that piggy bank.

“Why should I, as President of the United States, allow countries to continue to make Massive Trade Surpluses, as they have for decades … (while) the U.S. pays close to the entire cost of NATO-protecting many of these same countries that rip us off on Trade?”

To understand what drives Trump, and explains his exasperation and anger, these remarks are a good place to begin.

“A nation that spends more than it takes in from taxes, and consumes more of the world’s goods than it produces itself for export, year in and year out, is a nation on the way down.”

Our elites see America as an “indispensable nation,” the premier world power whose ordained duty it is to defend democracy, stand up to dictators and aggressors, and uphold a liberal world order.

They see U.S. wealth and power as splendid tools that fate has given them to shape the future of the planet.

Trump sees America as a nation being milked by allies who free ride on our defense effort, as they engage in trade practices that prosper their own peoples at America’s expense.

Where our elites live to play masters of the universe, Trump sees a world laughing behind America’s back, while allies exploit our magnanimity and idealism for their own national ends.

The numbers are impossible to refute and hard to explain.

A nation that spends more than it takes in from taxes, and consumes more of the world’s goods than it produces itself for export, year in and year out, is a nation on the way down.

We are emulating our British cousins of the 19th century.

Trump understands that this situation is not sustainable. His strength is that the people are still with him on putting America first.

Yet he faces some serious obstacles.

What is his strategy for turning a $796 billion trade deficit into a surplus? Is he prepared to impose the tariffs and import restrictions that would be required to turn America from the greatest trade-deficit nation in history to a trade-surplus nation, as we were up until the mid-1970s?

Americans are indeed carrying the lion’s share of the load of the defense of the West, and of fighting the terrorists and radical Islamists of the Middle East, and of protecting South Korea and Japan.

But if our NATO and Asian allies refuse to make the increases in defense he demands, is Trump really willing to cancel our treaty commitments, walk away from our war guarantees, and let these nations face Russia and China on their own? Could he cut that umbilical cord?