Behold Their Lofty Angst: Artists in the Trump Era—Part One 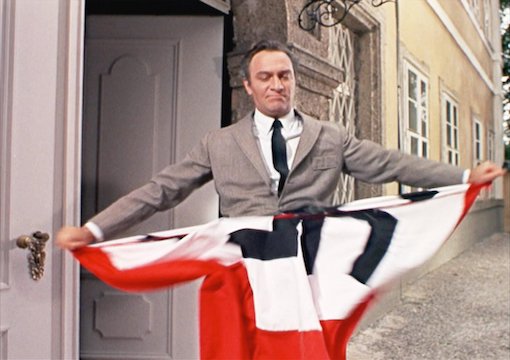 Lo, lefty artists across the land are speaking truth to power. How noble of them to rail against the aims of working-class white people to improve their lives and to be sovereign over the fate of their own nation!

For instance, in the current issue of The Atlantic, Jeffrey Goldberg’s ever more woke magazine, there is an article by Lin-Manuel Miranda called “The Role of the Artist in the Age of Trump.” Miranda is most known for creating and starring in the sublimely diverse and inclusive Hamilton, a 2015 hip-hop musical about the life of the Founding Father of that name. Miranda, we learn from his biographical note, is “a Pulitzer Prize–, Grammy–, Emmy–, and Tony Award–winning composer, lyricist, and actor.” No less impressive is Miranda’s talent for criticism and cultural commentary. “Consider The Sound of Music,” he writes. “It isn’t just about climbing mountains and fording streams. Look beyond the adorable von Trapp children: It’s about the looming existential threat of Nazism.” Then, by way of showing the musical drama’s enduring significance, Miranda adds: “No longer relevant? A GIF of Captain von Trapp tearing up a Nazi flag is something we see 10 times a day on Twitter, because all sorts of Nazis are out there again in 2019.”

For such sentences an editor cannot help feeling grateful, because one cannot ask for stronger support for a claim than a GIF frequently seen on Twitter—that exemplar of high seriousness and elevated discourse—or a precise assertion such as “all sorts of Nazis are out there again in 2019.”

Also fine is Miranda’s observation that “all art is political,” made three times in the article’s opening, 80-word paragraph, in case you’re too thick to get the point the first time or two.

In his “Preface to Shakespeare,” Samuel Johnson provided what I consider to be the high point of literary criticism:

Nothing can please many, and please long, but just representations of general nature. Particular manners can be known to few, and therefore few only can judge how nearly they are copied. The irregular combinations of fanciful invention may delight awhile, by that novelty of which the common satiety of life sends us all in quest: but the pleasures of sudden wonder are soon exhausted, and the mind can only repose on the stability of truth.

Trump uses language to destroy empathy. He criminalizes the impulse and imperative to seek asylum, to seek a place to live thousands of miles away because the alternative at home is worse. Through his lens, these seekers are not people; they’re “animals” or “bad hombres.”

“As a junkie needs his next fix come what may, so if we simply feel ‘empathy’ for others, everything will be all right.”

What artists can do is bring stories to the table that are unshakably true—the sort of stories that, once you’ve heard them, won’t let you return to what you thought before. I think about the crisis on the border constantly. I think about the famous photograph of a little girl crying beside a Border Patrol truck. That picture went viral because it seemed to capture the horror of family separations. But it turned out that the girl wasn’t being separated from her mother—her mother had simply been ordered to put her daughter down while she was searched by agents. The family was in distress, and the border crisis was real, but people used the details of this particular incident to close themselves off from empathy. “Fake news,” they said. A child is crying for her mother, but that’s not enough to keep people from pushing empathy away. I believe great art is like bypass surgery. It allows us to go around all of the psychological distancing mechanisms that turn people cold to the most vulnerable among us.

Batter my heart, three-personed God! Before reading this, I must confess, I’d thought that enforcing our southern border, like borders per se, is essential to the existence of the American nation, since there can’t be a nation without borders, just as your home is only conceivable if it’s distinct from mine. I’d thought that the problem with many “asylum seekers” is that they aren’t seeking asylum in the U.S. in a legal fashion, and that, furthermore, for straightforward reasons concerning economics, the scarcity of resources, and, above all, our commitment to the welfare of current citizens, we can only accommodate so many asylum seekers and immigrants in general. I’d thought that if “home is worse,” then it’s incumbent upon other nations to better themselves, the U.S. not having the ability to do this for them. Finally, I’d thought that though some of Trump’s comments on immigrants were negative, they were true nonetheless of some immigrants, and besides, their main (and rather shrewd and cynical) purpose was to appeal to the quite justified resentments of his white working-class voting base, persons who had been left behind in the global economy and in a country with too much immigration to support a strong working class. To be sure, politics is not necessarily ineffective for being ugly.

Well, having read Miranda’s article, I can only say that it’s relieving to have done with my former complex conception of the immigration issue, as well as the sobering natural limits it comprehended. The crucial thing to know, I see from Miranda, is that Trump is a villain who “uses language to destroy empathy,” a truth Miranda imparts via his charming knack for cliché (“Through his lens,” constant talk about “empathy,” “at the end of the day,” “Times may change and politics may change,” and so forth).

Regarding “the famous photograph of a little girl crying beside a Border Patrol truck,” I’d thought it important to realize that in the U.S. criminals are routinely separated from their children, something without which the criminal justice system couldn’t function. And since manipulation is not desirable, I’d thought that Americans were right to decry the photograph as “fake news.” Yet, once again, I was in error. For “empathy,” Miranda gives me to understand, is a kind of magical solution to all human problems. The proper response to all situations and circumstances, no matter what they are, is “empathy.” As a junkie needs his next fix come what may, so if we simply feel “empathy” for others, everything will be all right.

Formerly, I’d thought that all art that is worthy of the name is something essentially formal or constructed, something well-wrought, a product of disciplined craftsmanship—and so much the better if it allows us to “repose on the stability of truth.” But thanks to Miranda, I now know that as in politics, so in art: The supreme value is “empathy,” because through it we can have some understanding of other people and their feelings. The purpose of art is “empathy.” Art is good insofar as it inspires “empathy.” “The most vulnerable among us,” needless to say, are those most in need of “empathy,” and so from now on I shall read only books by people of color, by non-heterosexuals, and by women. Likewise, with the music I listen to, the films and plays I watch, and the paintings I view. Suffused with so much empathy, I shall be beyond progressive reproach, and happy and virtuous besides.