Beloit College Students Convinced You Can Get Married in Outer Space 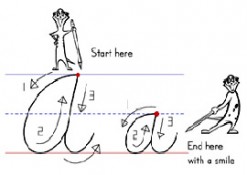 1. Few in the class know how to write in cursive.

Few people ever did. I, for example, never did. This was in spite of having been taught Penmanship as a school subject, beginning at age eight with steel-nib pens, dip-it-in inkwells, and actual copybooks. (Rudyard Kipling’s wonderful poem “The Gods of the Copybook Headings” suffers from the defect that to anyone much younger than me—which means better than 93 percent of the U.S. population, I note glumly—the word “copybook” has to be explained.) None of it stuck, and I have always had a terrible cursive hand. I’m not even consistent. My handwritten “l,” for example, is sometimes just a straight vertical line segment, at other times a cursive loop. I don’t believe I have ever, outside Penmanship class, written a proper cursive “f,” “k,” “r,” or “s.”

At least America’s college class of 2014 can write in some fashion. Over in China, where writing is a much more complicated business, the younger generation has largely given up on it. The great majority of Chinese words transmitted from a pair of 18-year-old hands to the eyes of a coeval, are tapped out on a keyboard, via a trick that uses the Latin alphabet. To watch a Chinese college student trying to hand-write a note is painful—lots of head-scratching, staring at ceiling for inspiration, final recourse to dictionary.

2. Email is just too slow, and they seldom if ever use snail mail.

I vaguely know what’s going on here. This is about “texting” and “twittering,” the enclosing of which words in quotation marks reveals, all by itself, that I am hopelessly far behind the Zeitgeist. I’ve never texted, never twittered. An awful lot of people are still emailing, though. “1-100 of 26063,” says my gmail page. Those emailers can’t all be codgers.

5. Los Angelinos have always been trying to get along.

They don’t seem to have been trying very hard.

10. A quarter of the class has at least one immigrant parent, and the immigration debate is not a big priority …

28. They’ve never recognized that pointing to their wrists was a request for the time of day.

They don’t wear wristwatches? Really? I checked with Nellie Derbyshire, age 17 1/2. Sure enough, she owns no wristwatch. “So what do you do when you want to know the time?” She sighs, raises eyes to heaven. “Cell phone, Dad. Hel-lo.” I pull out the cell phone my wife forced me to start carrying last month. I open it up. Yep: 3:08 PM, right there on the screen. “Oh my God, you don’t have to open it, Dad. Look . . .” How on earth do they put up with us?

. So the wristwatch won’t quite last a hundred years as a universal accessory. Heck, I still have a pocket watch.

If Czechs and Slovaks—same race, same language (more or less), same church, same history of subjugation by the same imperial powers—can’t get along, what are the chances for majority-minority California, Hawaii, New Mexico, and Texas to stay in a union with the rest of us?

Oops, sorry—this is one of those questions I’m not supposed to ask, isn’t it? Sorry! Sorry!

36. Adhesive strips have always been available in varying skin tones.

News to me. Do they come with age spots?

43. Russians and Americans have always been living together in space.

Feugh. Predictions are rarely outright wrong, most often just mis-timed. There will be a city-flattening U.S.-Russian nuclear exchange, just as we 1950s kids knew there would. “Not this August, nor this September; you have this year to do what you like. Not next August, nor next September; that is still too soon … But the year after that or the year after that they fight.”—Ernest Hemingway, Notes on the Next War. Stock up on beans, bottled water, and ammo. Duck and cover!

45. They have always had a chance to do community service with local and federal programs to earn money for college.

But alas, they may never have had the chance to do actual work for an actual private-sector employer—you know, one of those “jobs Americans won’t do.”

48. Someone has always gotten married in space.

Wha? I totally missed that! Who? When? What else did I miss?

52. There have always been women priests in the Anglican Church.

Asked whether the stocky, gruff-voiced, crop-haired, fashion-challenged Emmy Noether was not an instance of a truly great female mathematician, her colleague Edmund Landau replied: “That Emmy is a truly great mathematician, I can certainly testify. That she is a woman, I am not so sure.”

60. Walmart has never sold handguns over the counter in the lower 48.

One more reason to get behind a candidate from Alaska!

62. Having hundreds of cable channels but nothing to watch has always been routine.

Hundreds? Well, my local cable service offers 498 channels, to be sure; but on a quick surf I find I can only see anything on 55 of them, and half of those are in Spanish. We have the minimum package from the cable company, it’s true, but then, we’re cheap, and not really TV people. In any case, there’s nothing to watch.

63. Their parents’ favorite TV sitcoms have always been showing up as movies.

The Dick Van Dyke Show was a movie? When?

67. Ruth Bader Ginsburg has always sat on the Supreme Court.

There’s your problem right there.