Ben Affleck’s The Town is a Perfectly Executed Heist 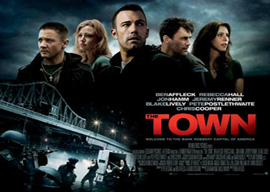 The Town, set amidst the fading (but increasingly fashionable) Irish-American underclass of Boston’s gentrifying Charlestown neighborhood, is a model of crime genre filmmaking, perhaps the best-executed film since July’s Inception. Ten minutes into the first bank robbery in this heist movie, it’s evident that movie audiences are back in capable hands again.

There’s nothing particularly new about The Town. Ben Affleck directs himself as an ace bandit looking to make one last big score so he can get out of the game. Affleck, who helped write this adaptation of Chuck Hogan’s 2005 novel Prince of Thieves, emphasizes his strengths as an actor by playing an older, sadder, and soberer version of the Boston Irish lout in his breakthrough, Good Will Hunting.

In his gang of robbers as competent as a film crew, his right hand man is yet another fearless psycho played by Jeremy Renner of The Hurt Locker. As a boy, Affleck’s character was adopted by Renner’s family when his dad got life without parole. The townie accent employed by Renner, who is from Modesto, California, is so authenticious (as one of the crew explains) that I have no idea what he says. Except that he wants to permanently silence the pretty witness (Rebecca Hall of Vicky Cristina Barcelona) who might be able to identify them to the cocky FBI detective (handsome Jon Hamm of Mad Men). But this damsel in distress brings forth Affleck’s long buried white knight.

We”ve seen it all before, but seldom this finely done.

One of the odder rituals of pop culture commentary is expressing amazement whenever another leading man competently directs a movie: Who could have imagined that Ben Affleck would establish himself as a capable director? After all, Affleck is only the umpty-umpth male movie star to take to directing. Whoever heard of Eastwood, Redford, Costner, Gibson, or Clooney?

Granted, Affleck is not better at acting than a lot of actors. Yet,  his career (from Oscar to flame-out) has given him much cause to reflect upon what works and doesn”t work on-screen.

Much of directing is acting like you know what you are doing. That’s how you hire the behind-the-scenes wizards who will actually make most of your movie for you, and that’s how you keep them happy on the set. And who is better at acting than an actor?

Granted, Affleck is not better at acting than a lot of actors. Yet, a career that has seen him share in a screenwriting Oscar at 25 with his old Little League pal Matt Damon for 1997’s Good Will Hunting, then flame out as one of the best paid and least liked stars of a decade ago has given him much cause to reflect upon what works and doesn”t work on-screen.