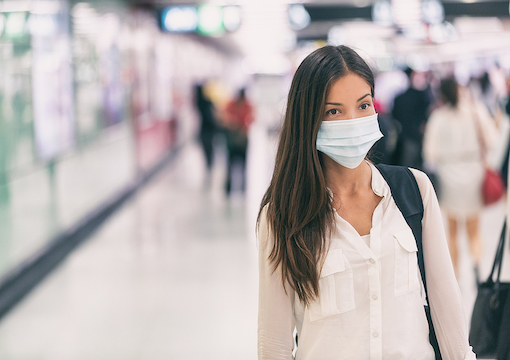 On two successive days, I traveled on the London Underground and the Paris Métro. One contrast between the passengers struck me very forcibly.

“In Britain we get the worst of both worlds: official hectoring and complete inefficacy.”

The difference between the passengers in London and Paris may be explained in more than one way, and I have not done the necessary research to be able to say which is the correct one. Perhaps the Paris Métro is patrolled more thoroughly than the London Underground, such that the threat of a substantial fine for those not wearing masks is a real one, which is not real in London. Perhaps the population of London is more undisciplined or freedom-loving than that of Paris, in short bloody-minded. Or again, perhaps it has a better or a worse, at any rate different, understanding of the benefits of mask-wearing in public places.

As we have now come to expect in Britain, however, we get the worst of both worlds: official hectoring and complete inefficacy. A notice by the roadside that tells drivers they must not drop litter is sure to be surrounded by a vast quantity of litter, as if in commentary on what the population thinks of its officialdom. It knows that the threat of a fine—sometimes up to $2,500—is not real, for the public administration is incapable of carrying out its threats. And in any case, the British, being by far the most slovenly people in Western Europe, if not in a much wider area, cannot tell the difference between a grass verge and a little bin. As a result, they have turned their whole country into a vast litter bin.

The relations between the population and the state in Britain are those of duty and obligation: the duty and obligation of the population toward the state, not the other way round. During the first Covid lockdown—one is beginning to forget how many there have been—the population was enjoined to stay at home in order to “protect the NHS,” the behemoth centralized health-care system that has served it so ill for more than seventy years. In essence, the population was asked to modify its behavior for the convenience of a state bureaucracy. The government might as well have said, “Protect the Inland Revenue: Pay Your Taxes.”

The government was able to get away with so ludicrous a slogan because of one of the most successful propaganda campaigns of the second half of the 20th century, namely that the institution of the National Health Service was a great social advance. It was nothing of the kind: Before it was founded, the country had one of the best health systems in the developed world and soon found itself with among the worst. The intention of the new service was egalitarian—treatment free at point of care and paid for from general taxation—and no one really bothered to check whether its effect was egalitarian. And since it has very unpleasant aspects for practically everyone, rich or poor, the British people still believe that it is egalitarian in its effect, when it is nothing of the kind. Such benefits as it confers are conferred in the rich, educated, and articulate, for the general principle of British public administration is for something to be done only if not doing it is likely to cause the relevant bureaucrats more trouble in the end. The rich, educated, and articulate can make trouble; the poor, uneducated, and inarticulate can only shout or throw bricks at the window (usually bulletproof and often soundproof, too).

The British population, believing that equality is a good in itself irrespective of whatever is equalized thereby, has come to regard the sheer unpleasantness of the NHS—to obtain treatment from which is an obstacle race in shabby buildings operated by exhausted and disgruntled staff—as evidence of its essential moral virtue, for it is unpleasant for all. Everyone is a pauper at the NHS’ gates, and where everyone is a pauper, no one is.

In addition to being treated better, the rich, educated, and articulate have escape routes, albeit expensive ones. Private medicine is still permitted in Britain, but in conditions of scarcity prices rise and so it is vastly, indeed fantastically, more expensive than it need be, or is elsewhere in Europe. The rich can also go abroad for treatment, and do.

Perhaps the population’s determination not to obey the rules on the London Underground is an inchoate rebellion against a bullying and demanding state that returns very little to those whom it bullies. In France, taxes are higher than in England, but at least something of value is returned to the population; in Britain, very little is, indeed quite a lot of what it returns is of negative value. The country’s infrastructure is crumbling, its educational system leaves many children ignorant and unprepared for anything, its health service is horrible, and everyone (except the government, which is the servant of the bureaucracy) knows that no matter how much is spent on these things, they will never improve.

There are convergences as well as divergencies between London and Paris. In both cities, cycle lanes are increasing congestion. In Paris, the lanes are sealed off with concrete blocks of outstanding ugliness, ruining once-graceful streets and turning them into slums. Recently in London, I spent half an hour in a traffic jam to go a mile on a thoroughfare half of which had been blocked off for cyclists—of whom, in half an hour, not a single one passed us. By such means do bureaucracies let us know who is boss—and it isn’t us.