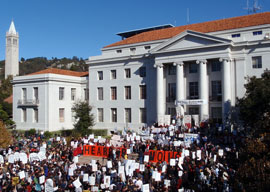 Ace Backwords doesn”t recognize Berkeley anymore. Sure, some of that can be attributed to his admitted drinking problem. But in a more figurative sense, the local icon and popular “underground” cartoonist no longer sees in present-day Berkeley even a small trace of the ostensibly freedom-loving, speak-your-mind town he embraced during the early “70s.

The San Francisco Chronicle‘s SFGate dubbed Backwords “one of the princes of the underground comics world.” His work has appeared in The San Francisco Herald, The San Francisco Bay Guardian, High Times, and The Berkeley Daily Planet. His self-published “zine,” Twisted Image, is considered a classic of its genre. For over fourteen years he co-published the Telegraph Street Calendar, a hugely popular almanac of the Berkeley street scene. He counts legendary fellow cartoonist Robert Crumb among his fans, and over the years he’s published interviews with Johnny Rotten, Jello Biafra, Henry Rollins, Charles Bukowski, and Charles Schulz.

He may not necessarily be a household name, but he’s a Berkeley legend who’s earned the right to call out his hometown on its BS. And last week, he did just that. Backwords was all set to attend the much-publicized speech by inflammatory flamer Milo Yiannopoulos when protesters queered the deal by setting fires, destroying property, and doing everything else that, to a leftist, qualifies as political discourse. Live-blogging from the scene of the tumult, the normally nonconfrontational Backwords didn”t mince words:

What happened on the Berkeley campus tonight was a disgrace. You”re either for free speech or you”re not. For the record, I”m against lowlife scum trying to suppress the free exchange of ideas with violence, intimidation and destruction. These people, smashing windows in the streets and setting fires, they are completely mentally insane. It’s a disgrace.

“If you”re a sane human being, a good rule of thumb is, don”t live in Berkeley.”

Backwords pointed out something that most in the mainstream media conveniently left out of their reportage: The riots took place in a plaza named in honor of free speech. “On the Mario Savio Free Speech Plaza, you now have a lowlife mob shutting down free speech,” he wrote. After posting a photo of the plaque that marks the plaza’s identity as a “free speech” haven, Backwords added, “The Mario Savio Free Speech plaque on Sproul Plaza. They should really just get rid of that thing. It makes Berkeley look foolish.”

I”ve known Ace Backwords for a good 25 years. Back in the early 1990s, when I was being banned from college campuses because of my dastardly revisionism, Ace spoke up on my behalf. Of course, as those were the days before social media, the repercussions for Ace were limited to his small community of counterculture cartoonists. Art Spiegelman, creator of the Maus “Holocaust education” graphic novel, sent Ace a missive stating, “I can only wish you a quick and excruciatingly painful death.” Robert Crumb sent a somewhat less hateful letter, encouraging Ace to stop dabbling in Holocaust revisionism. But Ace never wavered in his friendship with me, and I know him to be a man of principle. All the same, I was surprised to see him speak out so forcefully after the Milo debacle. Ace knows that the bulk of his fans fall on the left side of the political spectrum, and he’s never been one to pick fights. So I asked him why the “Milo riots” moved him to post comments he knew would be unpopular among his fan base. He replied that even before the events of last week, he’s had a major beef with leftist preening about “anti-racism”:

“Racism””as defined by Berkeley and the left and the mainstream media in general”basically means: “White race bad, all other races good.” “Whites are racist, all other races fight against white racism.” Of course, I don”t buy that crap. So I rarely get into discussions or dialogues about race. It’s like entering into a game where the rules are fake, and rigged against you from the beginning. Why bother playing?

So why speak out so unashamedly now?

The Berkeley protest against Milo (on the Mario Savio Free Speech Plaza, no less) was like dÃ©jÃ  vu. Reminded me of when the same rabble-rousing idiots shut down David Irving back in the 1990s. As a free-speech advocate, it annoyed me that certain people felt they had the right to decide what I could or couldn”t read. Fuck them.

Was Berkeley always this bad?

I first hit Berkeley in the summer of “74, age 17. The town was wall-to-wall hippies. It was a real freak show. I was staying at this boardinghouse and the freak living next door to me used to listen to psychedelic albums all day long, until he accidentally burned his room down. And there was this crazy bull dyke who used to hang out in the kitchen waving a steak knife and ranting about castrating male oppressors. It was like that everywhere. But also a great, celebratory mood. Nixon had just resigned the week before. So there was the feeling that we, the freaks, had won. And now it was party time!

I didn”t much notice the intolerance of the left back then. Probably because I was pretty much a knee-jerk PC liberal myself. It wasn”t until the feminist movement started becoming prominent in the late “70s, early “80s that all of a sudden there was this backlash against the free sexual expression that had been one of the hallmarks of the “60s counterculture (“free love” and all that). Suddenly pornography was equated with “hate speech” and you were severely reprimanded for the great crime of “sexism.”

The thing is, Ace was never accused of sexism. What he was accused of, back in the “90s, was anti-Semitism, due to his defense of Holocaust revisionists. I asked him about the flak he received from Crumb: “Crumb’s fascinated by all things Jewish (due to his obsession with big, hard, female Jewish buttocks). And we argued and screamed back and forth for about a year on the subject of Holocaust revisionism. As he put it: “If anyone has a right to be anti-Semitic, it’s me. I married two of them.””