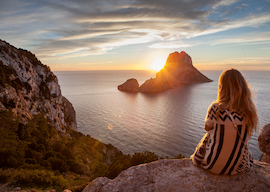 When I reached maturity, or at any rate stopped growing, I was of average height. Now I am below average height, the world having grown taller than I in the meantime.

In the same way, I used to be averagely egocentric or narcissistic, being neither entirely self-obsessed nor completely selfless but halfway between. The average in these characteristics, however, seems to have shifted too, so that I am now somewhat less than averagely narcissistic.

When I was growing up, no one had heard of the concept of wellness, that is to say of being better than not merely suffering from no illnesses. Nowadays, however, people make their health, or super-health, the focus of their lives, and in doing so turn themselves into an object of self-worship.

Recently the Times of London published the self-reported daily routine of three wellness warriors. The accompanying photograph showed them looking every bit as complacent and self-satisfied as those unctuous evangelical Christians who know that God loves them and are headed for heaven via a period of earthly prosperity. If they will experience eternal bliss, it is only what they deserve.

I wake up and immediately rehydrate. Your body is most absorbent after you sleep, so the first thing you put in it is the most important. I have a glass of Rebel Kitchen raw coconut water (you should be drinking slightly pink coconut water not white, as that’s more concentrated) and dilute it with water at a ratio of 2:1. I take multi-vitamins and vitamin C boosters.

Where, one might ask, does he sleep? The Sahara desert? More likely Chiswick or Clapham (prosperous districts of the inner part of outer London, where the worried-well who think of illness as an infringement of human rights congregate in droves). I was reminded of the medical students whom I used to examine, who brought bottles of water with them to the exam as if it were being held at an open-air bus station in Nouakchott, the capital of Mauritania.

Having resuscitated himself physically, Alex attends to his soul:

I do some meditation, where I might recite some mantras. One of them is, “All my relationships are harmonious and full of love,” which is good if you are working with difficult clients.”

“Compared with this, Uriah Heep was straight-talking and plain-dealing.”

Compared with this, Uriah Heep was straight-talking and plain-dealing; but what is most evident in this “mantra” (a word with spiritual connotations) is its complete solipsism. Alex’s relationships, if they can be called that, are either entirely with himself or delusional, because a relationship with another that is full of love requires that the other person should love as well as be loved, for otherwise it is not a relationship.

Having sung some “really relatable mantras,” he “focuses on each inhale and exhale for five minutes” before taking himself off to the gym for a little “yoga, cardio and weight-training,” after which he returns home—it is now 7:45—to “have a shot of coconut water and glutamine.” By now, he says, his serotonin levels are through the roof, and he showers with organic products and moisturizes with vitamin E oil.

During the rest of the day, he eats nuts, drinks green juice, and swallows activated charcoal and two apple cider vinegar tables “to help with digestion,” as well as digestive enzymes “to help distribute the nutrients all over my body.” And if, when turning in for the night after all this care for himself (and a second spell in the gym), he feels under the weather, he swallows some almond milk with turmeric. Naturally, he believes in the healing, or at least the prophylactic, powers of crystals, and keeps one on his desk, and works by the light of a Himalayan salt lamp, which “helps to absorb the magnetic and radioactive waves that are all around you from wifi and your computer.” All that is missing from his regime to render himself immortal is Hopi ear candles, coffee enemas, and red flannel underwear.

Luckily for Alex, he found a soul mate in a woman whom he married in Ibiza at the top of a cliff called Es Vedra, which is “the second most magnetic place in the world.” He knows this because he can feel it: “Our bodies [there] are magnetic, we are all energy.”

This is not satire, and Alex is not alone in his self-absorption. The next person who describes his routine is Tim:

7:45 I wake up having had, on average, seven hours and forty-one minutes’ sleep—I have analysed my sleep over the past four years and I know that this is the perfect amount for me.

I take shots of probiotics and Quinton Isotonic, a supplement that comes from plankton and contains enzymes that help me stay hydrated, and a glass of filtered water.

Then he weighs himself and measures the pH of his urine.

This is all both hilarious and sad. While of course the account of their regime is just that, and not a description of the totality of their lives, it is difficult to believe that they have much time or mental energy left over to interest themselves deeply in anything else. Even philately, a pastime that for many symbolizes futility, would be better.

Indeed, much better. About once a month I meet a friend for lunch in an excellent restaurant halfway between us. I have reached the age of frequent urination, but I greatly enjoy going to the lavatory there because, above the urinals, is wallpaper that consists of a display of hundreds of Penny Blacks, the first postage stamps in the world ever issued (for some reason, the date of their first issue, 1840, has always stuck in my mind). How fascinating are the variations, and no doubt the explanation of the variations! I suspect that the study of Penny Blacks could last a lifetime without exhausting it. Thanks to the distraction of the Penny Blacks, it takes me even longer than usual to void (I have reached the age when mental concentration is necessary to do so).

My advice to Alex and Tim, then, is: Throw down your enzymes, take up philately! And remember always what Francis Bacon said:

It is a poor centre of a man’s actions, himself.