Better to Dream Than to Be Woke 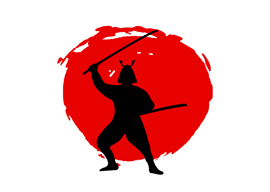 Gstaad—I need it like Boris needs a bleach job. Another birthday, that is. Birthdays tend to make one’s life pass before him in a flash. As it does, I imagine, while facing a firing squad, or a samurai intending harm. I mention the latter because I recently dreamed of living in a feudal society where samurai ruled supreme. And how happy I was until I woke up. Now soulless bureaucrats rule instead of samurai, and it makes for a crappier world.

Looking back—not much point in looking ahead, is there?—I regret some things, like missing an education in the classics. But most of all, I should have gone and lived in Japan when I was young. I began karate training 55 years ago and have never missed a day except when injured. The Japanese I trained with were brave and very polite, loved the past, and honored their ancestors. And most of them yearned for a feudal system, like I do. Multiculturalism in Japan was something to scare tiny misbehaving children with. Now it’s too late, but I shall be visiting this year and have a fight arranged with Master Wada, in his late 60s and also looking forward to it.

“Now soulless bureaucrats rule instead of samurai, and it makes for a crappier world.”

But for the moment I think back of absent friends like Nick Scott, and worry about the health of Commodore Tim Hoare, and have come to the conclusion that Jeremy Clarke is very wise to choose to live in a cave, as the whole place is about to be overrun by the barbarians. (It’s the last place they’d wish to return to.) Absent friends are often on one’s mind as the years roll by. No use listing them, this space would be one long name-drop, but it’s funny how they remain active in one’s dreams. Especially just before dawn and the wake-up call. The recent dream I previously mentioned about a feudal society was extremely vivid. It included a Spartan part—both my maternal grandparents were Spartans and had sent five sons to the front the day after war was declared in 1940. Although I revered Sparta as a child, I followed an Athenian way of life. Alcibiades was and is my hero, and the all-knowing professor Peter Jones will guess why: The individual is more important than the state—the basis of conservative thought, I suppose. I used the conservative creed for different purposes, to amuse and enjoy myself.

Never mind. No one’s perfect, and there are worse things than amusing oneself. Like minding other people’s business and trying to tell others how to think and live. I had the word “woke” explained to me, and it’s the usual bullshit to do with diversity, inclusivity, and systemic white racism. These things are gestural, slogans invented to hide truths too harsh for people to accept. They lack subtlety and depth, and most important, veracity. But the left has always lived a lie, so now it has invented an overweening sense of virtue and has idiots and morons repeating its slogans ad nauseam. Just look at what they’re doing to Boris over a couple of rather good joke descriptions of oppressed Arab girls having to look like Ali Baba.

If this is the left’s intellectual posture, what is wrong with a feudal society to brainwash it into working again? At least it will stop this moral preening, this overwrought interpretation of anything and everything. Just imagine if I had written the following: “Oh man, it’s kind of sick how much joy I get out of being cruel to old black men.” “Dumbass fucking black people…” “Are black people genetically predisposed to burn faster in the sun, thus logically being only fit to live underground like groveling goblins?” Now change the word “black” to “white” in those three sentences. Sarah Jeong wrote the above about white people and was recently hired as an editor by The New York Times. See what I mean about an uneven playing field and how something must be done to stop this rot? Like stopping the corrosive effects of modern identity politics with strict Spartan-like laws. Slogans against white people must be punished with the ferocity that any slogan against blacks is today, or else.

Mind you, in America they’d call this whistling Dixie, a lost cause. But I happen to love lost causes as much as I love Dixie and the old South and Robert E. Lee. For my 82nd birthday I sat under a beech-tree next to my hostess Lara Livanos and had a wine that Bruce Anderson would lose two stone for, and then some. My daughter and my hostess were on either side of me and I got very, very tipsy and then sat next to a beautiful Italian lady of great breeding and style and flirted outrageously until almost the dawn. We discovered a picture of Harvey Weinstein and myself taken before the scandal, and my little girl, who is expecting, had the bright idea of turning it into a place card. No one got the joke and one woman who shall remain nameless even asked me if he was my son. This had to be the final straw. My boy is extremely good-looking, something old Harvey is not. To be asked such a question sitting under the stars on a beautiful night on one’s birthday is a bit like waking up from a beautiful dream of living in a feudal society and encountering the world we’re living in today. Not a happy start to the day.