Better a Hero Than a Celebrity 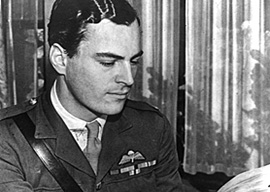 I first met Sir Patrick Leigh Fermor in the summer of 1977 in Corfu. I was onboard Gianni Agnelli’s boat, and the charismatic Fiat chairman asked me to go ashore and bring “a very smart Englishman whose ancient Greek is much better than yours.” I knew “Paddy,” as everyone called him, by sight, because among us Greeks he was on a par with our ancient heroes. Leigh Fermor was not only famous for his books on Greece—Mani and Roumeli—he was renowned for his incredible heroics in a guerrilla operation in Crete in May 1944. Having spent two years disguised as a Cretan shepherd in the island’s rough mountains harassing German troops, Paddy dressed as a German police officer and stopped a car carrying General Karl Kreipe, the island commander. Having killed the general’s chauffeur, Leigh Fermor proceeded to wear the general’s hat and managed to bluff his way through Heraklion and 22 subsequent checkpoints. Kreipe was stuffed under the backseat while Leigh Fermor’s bat man and three hefty Greek rebels sat on him. For three weeks the group managed to evade frantic German search parties, finally marching the general over Mount Ida, the mythical post-birth hiding ground of Zeus.

“Heroics aside, Leigh Fermor was often compared to Lord Byron for being both a man of action and learning.”

One moonlit night high up, Fermor was guarding the general when Kreipe, gazing up at the snowy peak, recited the first line of Horace’s ode, Vides ut alta stet nive candidum…—“ You see how [Mount] Soracte stands out white with deep snow.…” Leigh Fermor then continued the poem in perfect Latin until the end. The two men stared at each other, realizing, as Paddy later wrote, that they had “drunk at the same fountain.” The German and the Englishman then made a pact. Kreipe gave his word as an officer that he would not try and escape; in return, Leigh Fermor never turned Kreipe over to the firing squad.

What follows came straight from Paddy to me in Corfu. Six months after Kreipe’s kidnapping, Leigh Fermor landed yet again on the island to celebrate its liberation. He was taken behind Heraklion’s main square, where the general who succeeded Kreipe was about to be shot. Paddy was aghast because the German was cool as ice and when Paddy introduced himself, the condemned said: “Ah, Leigh Fermor, you were lucky. Kreipe was an intellectual, a softie; I would have killed you on the spot.” When Paddy asked him if there was anything he could do for him, the German asked for one last cigarette, thanked him, smoked it while inhaling rather deeply, then said goodbye and went off and got shot ramrod-straight.