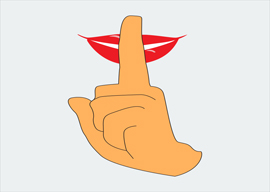 Future historians, if there are any, will look on our epoch as one of bad temper. The ease with which people are provoked to the expression of outrage suggests that it has a very important function in our mental life, if not necessarily in our mental equilibrium. Outrage is a substitute for religion: It convinces us that our existence has some kind of meaning or significance beyond itself, that is to say beyond the paltry flux of day-to-day existence, especially when that existence is a securely comfortable one. Therefore we go looking for things to be outraged about as anteaters look for ants. Of all emotions, outrage is not only one of the most pleasurable but also one of the most reliable.

A professor in California has recently found herself the object of outrage after expressing her own outrage in class. The following headline in The Washington Post drew my attention to her story:

A professor called Trump’s election an “act of terrorism.” Then she became the victim of terror.

Olga Perez Stable Cox is described by the newspaper as a “human sexuality professor,” a description that I freely confess brought a smile to my face. What must her practical classes be like? “Today we are doing autoerotic asphyxiation. Take out your ropes, boys and girls. Do I have any volunteers?”

A little further on, the article confirmed my belief that most tertiary education in the Western world is now the means by which we make youth pay for (or at least run up debts for, which as we know is not quite the same thing) its own unemployment:

“Thoughts and feelings are not like pus in an abscess that unless drained by expression will cause a kind of mental septicemia.”

Professor Olga Cox’s class on human sexuality has a reputation for being a uniquely open forum, one that functioned, at times, like a communal therapy session for hundreds of students at a time.

This, in the mouth of The Washington Post, is praise; but it made me think of a cartoon in Punch, circa 1950, in which a child psychiatrist says to a respectable mother, as her malicious-looking little child leaves his consulting room, “And remember, Mrs. Jones, if that doesn”t work, give him a good slap.”

Anyhow, Professor Olga Cox expressed her opinion in class that the election of Donald Trump was an act of terrorism and an assault on America. One of her students recorded her saying it and spread it via his mobile telephone. Before long, Professor Cox was the object not only of vile abuse, but of implicit and even explicit threat. Someone published her home address, which could have been taken as an incitement to attack and even kill her (what was the point of publishing it otherwise?). Understandably, she became very frightened, for, as she said, there are a sufficient number of lunatics in society for one of them to carry out the act implicitly called for.

But to return for a moment to the classroom: It is obvious that she should not have said what she said. As a characterization of events in America it is so inaccurate or imprecise, at the same time so feeble and inflammatory, that it bespeaks either an inability to control herself or a lack of intellect (or both), neither of them admirable qualities in a university teacher. And the classroom is no place for teachers to express their raw political opinions to young people who are dependent upon them for good grades.

On the other hand, the student who recorded and spread her comments widely was also acting in a destructive fashion, perhaps without fully realizing it. If everything we say or do can be recorded and published without our consent, we shall soon be living in a North Korea of the soul. No conversation will be truly private, no group of people to be trusted not to contain its digital Judas. The only safety will be in silence.

Of the abuse Professor Cox received, including suggestions that she shoot herself, nothing needs to be said, except that those who indulged in it almost certainly enjoyed it.

Perhaps the heart of the problem lies in the sub-Freudian doctrine that self-expression is an unmitigated good, and self-containment treason to one’s own self. This doctrine is very widely, if not universally, believed, but it is a savage doctrine, especially in an age of instantaneous communication, for it destroys the distinction between legitimate and illegitimate criticism, and the limits to what may be said by civilized beings”limits that we must lay down for ourselves if we do not want to live in a dictatorship of law that will bully but not control us.