Better Soon Than Late: The NYT Calls it Right 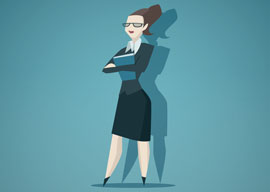 The New York Times“ first female executive editor was recently canned after only three years on the job, and geniuses from Gawker to New Republic instantly assumed it was because of her sex, though ovaries didn”t stop the Times from hiring her in the first place”apparently unwisely.

Contra the chorus of abstract complaints from feminists is a muted countermelody of real-life grievances from Jill Abramson’s browbeaten underlings, not to mention the bizarre and complex layers of the case that other pubs are trying to jump on, though per journalistic tradition the paper is being as secretive about the firing as a coterie of murderers. It doesn”t seem that Abramson was hastily fired the first time she did something egomaniacal, underhanded, or”call it what it is, for the love of Jove”bitchy. If the news industry in New York has been trundling along anything like the one I love to hate here in Chicago has done, au contraire; she was probably allowed to go on for too long.

Destructive editor stunts are nothing new, and guessing whether they”re most often a female trouble is beyond my statistical ken. Anecdotally speaking, I”ve never worked with a male editor who was as nuts as Abramson is reported to be, but as for females? Ah, life, you uncomfortable creep. Taki‘s Taki wrote last week that one of Abramson’s offenses was her tendency to “fire talented males in favor of less talented females,” which brought to mind a cautionary tale from my cub reportership at the Chicago Reader during the early aughts.

“The story of how their differences finally exploded in early 2002 has never been shared with the public. But I think it’s about time.”

The Reader then was not yet a shadow of its legendary self. I was hired in 2000 as a proofreader by the managing editor at the time, Pat Arden. He looked past both my lack of a J-school degree and my lack of nepotistic connections to the paper”I was one of about two hires in a decade who didn”t already know an insider”to give me the job strictly because I showed the ability to do it. (Wild idea, I know.)

During the final interview”during which Arden walked me around River North and the Loop, pointing out landmarks of journalistic interest and picking up a package from a freelance photographer; I cherish the memory”he was already asking me to write for the paper. I said my own writing probably wasn”t polished enough yet. But over the following year and a half, he never quit encouraging me to write and strictly criticizing what I did write, as he did with everyone he thought had potential, male or female.

As for the paper’s editor-in-chief, Alison True, Chicago’s premier cheerleader for you-go-girl upper-middle-class feminism? Not so encouraging.

True seemed to dislike Arden’s hires on principle, assuming we must be grimy proles like he was. The first time she saw me True gave me a look like she”d just spotted a horse turd on the newsroom floor. To be fair, I was just off the turnip truck from Wisconsin, but it only takes a week of walking around Chiraq for the coating of cow plop on one’s shoes to be replaced entirely by human urine. Things did not improve when Alison noticed I wasn”t a team-playing feminist”though by contrast to Abramson’s reported surliness, True’s way of being an ass was more passive-aggressive and snide.

True and Arden”we called them Mom and Dad”had different philosophies of how editorial should be run, and the tension was palpable. Pat’s priority as a nurturer of future journalists was teaching us journalism: another of his nutty ideas. Alison’s priority was deciding who dressed the coolest, and encouraging them to be as ridiculous as possible. (Which had a chilling effect on the paper’s core readership, but scroo u nerdz, I”m the boss!)

Unfortunately for Arden, as well as for Chicago journalism, his priorities did not include coddling the privileged ladies True favored in hiring and promotion. The story of how their differences finally exploded in early 2002 has never been shared with the public.

But I think it’s about time. Journalistic ethics? Ha! We were all scared to piss off future partners in nepotism. (My hope is that someday an underling from the NYT will follow my lead and let us know exactly what just happened under their current circling of the wagons. Why should newsmaking be the only institution that’s safe from newsmaking?)

So: There was an editor at the Reader who, to oi polloi’s knowledge, had never proofread, or copyedited, or cub-reported, or worked her way up in any guise. But True had mysteriously seen fit to hand Martha Bayne an office anyway.

The details of what happened in Bayne’s final interactions with Arden were kept hidden from the rest of us, but the friction there was clear too. Arden (correctly) considered Martha Bayne to be an arrogant incompetent (a couple of years ago on Facebook, Bayne published the revelation, surprising no one but herself, that she assumes she’s smarter than everyone). Arden had a temper, granted, but Bayne was an expert at provoking people; one day near deadline, he finally lost his shit at her. Bayne went crying to True, and True saw her golden excuse to fire the guy that most of us knew was her”and our”meal ticket.