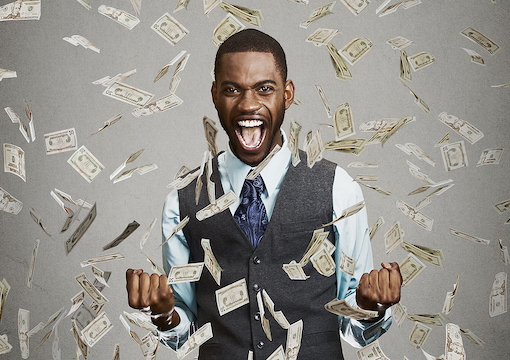 Recently I was scrolling through The Guardian looking for easy targets—The Guardian is an inexhaustible source of these, which are, of course, any journalist’s best friends—when I came across an article by Dedrick Asante-Muhammad. I don’t know whether this was the name he had at birth, but whether it was given or assumed, it seems perfect for a monomaniac, a fanatic, or a mere political entrepreneur.

The idea propounded in the article was that every black person in the United States with an identifiable slave ancestor should be given, as of right, $20,000 a year for 20 years. Those younger than 25 should have it put in trust for them till they reach that age. Thus—only thus?—will the difference in wealth between blacks and whites in America be annihilated.

Needless to say, the average reader of The Guardian, ever on the lookout for yet another reason to feel good about himself and morally superior to the rest of benighted mankind (or should I say humankind?), will not dismiss this idea with the snort of derision that it deserves, but roll it round in his mind as an oenophile rolls a mouthful of wine round in his mouth. For such a person, the prospect of economic confiscation—of others, of course—acts as the presence of blood in the sea is said to act upon sharks.

“Open societies have this great disadvantage: that they force you to look at your own part in your situation.”

The objections to the proposal are so many and so obvious that it is difficult to know where to begin. When American blacks go to Africa, not a few of them are inclined to thank their lucky stars that their ancestors were taken into slavery. No one, I presume, would suggest that they had incurred a financial debt to the descendants of those who took their ancestors into slavery, and to those who created and maintained the demand for slaves.

Large gifts of money do not always benefit those who receive them. This is true of groups as it is of individuals. I think it distinctly possible that if I had received a large sum at the age of 25 (or at any rate a sum that seemed to me at that age to be very large), I might have used it so unwisely that I would never have recovered from it. Naturally, individuals vary and some would benefit. But in general, good fortune is a more difficult test of character than bad, in part because bad fortune is apt to reduce the scope of choice—and choice is often disastrous for those of bad, juvenile, or even merely weak character.

Long ago, I visited a small island in the Central Pacific called Nauru a few times. Its population, about 4,000, had once been subsistence cultivators and fishermen. Their island was a source of valuable phosphate rock, which was mined by an organization called the British Phosphate Commission, the profits of which went almost entirely to Britain, Australia, and New Zealand.

When Nauru gained its independence, the assets—the phosphate rock—were transferred to Nauru, and the Nauruans went almost overnight from being poor to rich, their country being at one time the richest, or among the richest, in the world.

The sudden accession to wealth did not have an altogether happy result for the Nauruans. They did not have to work; indeed, there was very little work for them to do. They ate and drank instead. In a way, the country was in the avant-garde of Western civilization, for half of its population began to suffer from Type 2 diabetes and became the object of medical study by, among others, the distinguished Australian physician Professor Paul Zimmet. Overall, the effects of money for nothing were not good.

It is hardly necessary to go into other objections to the scheme proposed in The Guardian, moral and practical. To do so would be like trying to refute the idea that the moon is made of marshmallow.

Is it very far-fetched to see a great deal of anxiety and even self-contempt, albeit unstated or subliminal, as well as condescension, in this proposal? After all, it is not deemed necessary to assist any other group in the way proposed, not even women. In other words, there is in it the suspicion that in an open society (and no society can be open without also being unequal), such as America has long been, blacks are doomed to end up, on average and as a group, at the bottom of the pile unless they are given special privileges.

No one doubts that prejudice exists against blacks (and not only, incidentally, among whites) in America. But prejudice by itself, provided it is not universal and there are people who do not share it, does not prevent ascension on the social scale, unpleasant as it must be for those who suffer it. It is not a lifetime ago that some of the elite education institutions in America placed limits—and very low limits—on the number of Jews admitted to them. No one would say, however, that (lamentable or disgraceful as this was) the Jews in America were impeded from advancement. And something similar is true of many other groups, some of which started off poorer than American blacks today, and whose members did not require immense subsidies to advance themselves.

It is obviously true that in any unequal society, life is easier for some people than for others, both as groups and as individuals. This is unfair, but as Thomas Sowell has long pointed out, the quest for cosmic justice is both totalitarian in implication and can lead only to continual sifting of the entrails of group and individual disparities, a sifting that itself promotes resentment in both individuals and groups, as well as conflict.

Open societies have this great disadvantage: that they force you to look at your own part in your situation. Unless you are a rip-roaring success, which very few of us are (and those few are often not very attractive as people), you are forced to confront your own ineptitude, lack of talent, bad choices from an early age, etc., etc. It is much easier to deny that your society is an open one, and then sink back into a mixture of apathy, politicking, and continuation of immediately gratifying but ultimately self-destructive bad habits.