Beyond the Burqa: America’s Role in Regulating Taste 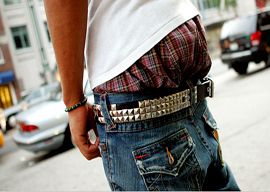 France’s recent “Burqa Ban” has provoked all the global indignation and murderous outrage one would have expected. Pointed observations on the irony of a liberal democracy which tells its citizens what they can and can”t wear were soon followed by Muslims making lunatic bomb threats. Al Qaeda has sworn to “seek dreadful revenge.” France has instigated a cacophony of international noise, just to keep a couple thousand ladies from strolling the Parisian streets looking like the singing Dinks from Spaceballs.

This should be a familiar story to most Americans. While the world watches France harass its human curtain-rods, American authoritarians”in both public and private spheres”have ramped up efforts to restrict the apparel of various distasteful minorities. The message of this fashion fascism is clear: “Dress like somebody”or stay at home!”

While Mayor Best maintains that the ban targets no particular ethnic group, everybody knows that the only people strutting around with their asses hanging out”with the exception of plumbers”are surly black youths and their pasty-faced imitators. Not surprisingly, many black citizens support the bill. In a majority African-American township of nearly sixteen thousand people, this local legislation may affect more individuals than the Burqa Ban, which addresses a tiny national minority and carries a fine of “¬150.

Along with Hahira, Hawkinsville, GA, Riviera Beach, FL, and at least six cities and parishes in Louisiana that have already passed similar laws, the decent folks of Dublin will no longer have to awkwardly avoid staring at all those bulbous black booties. At Morehouse College in nearby Atlanta, a different group of, err…brothers?…are being told how to dress. Claiming such illustrious alumni as Martin Luther King, Jr., and Spike Lee, this exclusively African-American institution has a reputation for producing young men unafraid to go against the grain. But in October last year, the all-male school passed the “Appropriate Attire Policy,” prohibiting women’s clothing, makeup, high heels, purses, and weaves from being worn on campus or school-related functions. The dress code specifically targeted five transvestite students who had caused considerable discomfort, as well as the occasional misdirected erection.

Of course, many civil-rights advocates condemned the code. By trumpeting equality, Morehouse faculty clearly chose to put “bros” before “hos.”

A young man was thoroughly beaten in front of 4 million people after expressing his German-American pride.

While the ban on wearing religious symbols in French schools (i.e., the hijab) attracted the international spotlight in 2004, intolerant dress codes had already gotten their stride in the U.S. after the numerous late-90s school shootings. Gang-related colors and black trenchcoats terrified hand-wringing parents and teachers, leading many districts to prohibit T-shirts featuring Tupac, Biggie Smalls, or Marilyn Manson. This paranoid tendency took an unexpected turn this year after a patriotic fashion faux pas during a Cinco de Mayo celebration at Live Oak High School in Morgan Hill, CA. In a display of unashamed patriotism that occupies some bizarre border between trendy post-9/11 consumerism and ballsy defiance, five students came to their predominantly Hispanic school wearing American flag shirts and bandanas. Surrounded by Mexican-American classmates decked out in green, white, and red, these kids looked like an ass-stomping waiting to happen. Assistant Principal Miguel Rodriguez promptly told the boys to either remove the shirts or hit the bricks. Their mothers were livid, demanding that school officials apologize. What have we come to when a kid can”t express his love of country with red, white, and blue TapouT gear?

The next day, fifty Chicano students walked out of Live Oak and marched on City Hall to support Principal Rodriguez, alleging that wearing an American flag on Cinco de Mayo was “disrespectful.” In an interview with Fox News, however, Dominic Maciel”one of the patriotic five, who resembles a pubescent Timothy McVeigh despite his father’s Mexican descent”countered, “I have no problem with them wearing their Mexican stuff.”