Beyond the Hubbub of Aaron Sorkin’s The Social Network 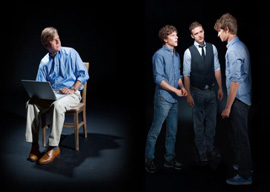 In the Internet Age, an increasing fraction of media “content” is generated by young nobodies, much to the disgust of old pros, such as screenwriter Aaron Sorkin of TV’s The West Wing: “I am all for everyone having a voice, I just don’t think everyone has earned the microphone. And that’s what the Internet has done.”

Sorkin has teamed up with veteran director David Fincher (Fight Club) to strike back at Kids These Days by making a supremely accomplished bit of up-market razzle-dazzle, The Social Network, an enjoyably bogus hatchet job on 26-year-old zillionaire Mark Zuckerberg, founder of Facebook.com. Hyped as The Film that Defines a Generation, The Social Network is more an entertaining compendium of the worries of the new generation’s upper middle class parents: elite colleges, IQ, money, the social status of their kids on the marriage market, and why young people never go outside anymore.

The Social Network asks: How could somebody who is extremely smart but not intuitively gifted at making and keeping friends ever figure out the logic underlying friendship well enough to program it into a computer?

Doesn”t that question answer itself?

The Social Network succeeds on sheer show biz chops despite less-than-compelling source material. To avoid a libel suit, the movie is stuck dramatizing the legal claims to a share of Zuckerberg’s fortune filed by two sets of fifth wheels he knew at Harvard, the preppie Winklevoss identical twins and the audience’s nice-guy surrogate, Zuckerberg’s rich Brazilian roommate.

All poor Eduardo Saverin ever wanted was Mark’s friendship. That, and not passing up his Wall Street internship at Lehman Brothers when Zuckerberg and the other programmers moved the business to Palo Alto. Plus, Eduardo merely wanted business control despite never having much of a clue where Facebook should go. And don”t forget a return on his $19,000 investment of five million percent.

Sorkin portrays Jews at Harvard in 2003 as pushy outsiders desperate to break out of the ghetto of the one Jewish fraternity and into the WASPy “Final Clubs” populated by carefully bred ubermen.

The hubbub over The Social Network is a reminder that, despite all the technological innovations in ways to amuse yourself in your own room, movies that you have to leave your house to see remain the apex predators of popular culture.
The peculiar strength of movies is that they end. In the 21st Century, watching a television series, playing a video game, or buying a cell phone is increasingly like enrolling in a cult contrived to consume several years of your life. In contrast, two hours and one minute after The Social Network starts, it’s over.

This relatively short duration allows Fincher to maintain a level of intensity”heightened by Trent Reznor’s artfully grating score”unachievable in more protracted media. The Social Network reminds us that while William Randolph Hearst published billions of words in his newspapers, Orson Welles shaped how we remember the man in just 119 minutes of Citizen Kane.