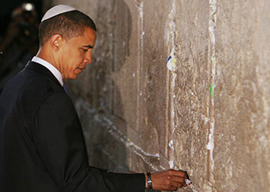 Not since Nikita Khrushchev berated Dwight Eisenhower over Gary Powers’ U-2 spy flight over Russia only weeks earlier has an American president been subjected to a dressing down like the one Barack Obama received from Benjamin Netanyahu on Friday.

With this crucial difference. Khrushchev ranted behind closed doors, and when Ike refused to apologize, blew up the Paris summit hosted by President de Gaulle.

Obama, however, was lectured like some schoolboy in the Oval Office in front of the national press and a worldwide TV audience.

And two days later, he trooped over to the Israeli lobby AIPAC to walk back what he had said that had so infuriated Netanyahu.

“Bibi” then purred that he was “pleased” with the clarification.

Diplomatic oil is now being poured over the troubled waters, but this humiliation will not be forgotten.

What did Obama do to draw this public rebuke? In his Thursday speech on the Arab Spring and Middle East peace, Obama declared:

“We believe the borders of Israel should be based on the 1967 lines with mutually agreed swaps, so that secure and recognized borders are established for both states. … Israel must be able to defend itself—by itself—against any threat.”

“Moreover, Jewish contributions, by some estimates, may make up half of all the contributions to the Democratic Party.”

Ignoring Obama’s call for “mutually agreed swaps” of land to guarantee secure and defensible borders for Israel, Netanyahu, warning the president against a peace “based on illusions,” acted as though Obama had called for an Israel withdrawal to the armistice line of 1967.

This was absurd. All Obama was saying was what three Israeli prime ministers—Yitzhak Rabin, Ehud Barak and Ehud Olmert—have all recognized.

To get Palestinian and international recognition for a united Jerusalem and Israel’s annexation of the settlements around the city, Israel will have to trade land for land.

Obama was not saying the 1967 borders were to be the end of negotiations but the starting point. Indeed, where else would one begin land negotiations if not from the last recognized map?

Undeniably, Netanyahu won the smack-down. The president was humiliated in the Oval Office, and in his trip to AIPAC’s woodshed he spoke of the future peace negotiations ending just as Israelis desire and demand.

Nor is this the first time Obama has been rolled by the Israeli prime minister. Obama came into office demanding an end to all new or expanded settlements on the West Bank and in East Jerusalem, and subsequently backed down from each and every demand.

Fed up, his Mideast peace negotiator George Mitchell has quit.