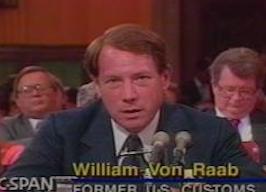 Charlottesville is an enchanting Virginia college town graced by the neoclassical architecture of the university’s founder, Thomas Jefferson. I flew there with two friends, the talented photographer Jonathan Becker and the Vietnam Special Forces Silver Star winner Chuck Pfeifer, all of us close buddies of the deceased. It was the memorial service for Willy von Raab, scourge of drug dealers and illegal immigrants while commissioner of customs for eight years under Reagan. Humorist P.J. O’Rourke and I were the two speakers, and after a rousing “America the Beautiful,” we retired for an afternoon of Southern hospitality and University of Virginia coed watching.

I know, this is not woke, but nor is heterosexuality, beauty, or grace—or Christianity, for that matter. Charlottesville brought back memories of careless sunlit days of lounging around the frat house drinking mint juleps and writing love letters to Sweetbriar girls: Mary Blair Scott, Ellen Hurst, Natalie Farrar—three enchanting, sultry Southern belles, now in their late 70s or even early 80s. Believe you me, as they say in the Bronx, jejune Oxford evenings à la Sebastian Flyte in Brideshead Revisited had nothing on us. Zero. Zilch.

The rituals of spring are ever present in Virginia, the cherry blossoms and the magnolias, the pretty girls in their shorts on Fraternity Row, the famous serpentine wall and the imposing Rotunda of Mr. Jefferson keeping one’s mind away from the horrors and ugliness of big American cities. If only one could go back in time. That’s an old lament of mostly old people. But sitting in cafés one sat in sixty years ago does concentrate the mind as to how lovely youth once was. How confident and how certain one was that life would be a fantastic adventure shared with a myriad of beauties. The honor system that was strictly observed by everyone on and off the campus made it easy to be a young adult. There were no scams, hoaxes, or cons, no phony accusations of rape or of vile language, none of what makes students today so exasperatingly limp, woke, and looking to take offense. No one talked about identity or empowerment; only freaks swore. Wearing a coat and tie was not mandatory, but everyone did it. The only one in my class who did not was George Finn, excused by his peers because he had fought in Korea.

“Intolerance is now the norm, and no one’s more intolerant than the left.”

What I remember distinctly was that our ways were not the only right ways. We did not insist that all others were wrong. We did not seek to impose a single standard, and did not become extremely upset when others seemed not even to recognize those truths that we held to be self-evident. I suppose that was so because of the honor code we so believed in and adhered to. One did not lie about one’s perceived enemies, or make up stories.

The University of Virginia, some of you may recall, was where a phony female journalist by the name of Erdely invented a multiple-rape story against a fraternity—that incidentally had invited me to join, but I didn’t—that turned out to be a total hoax. Rolling Stone ran the false item on its cover and repented later, after it had collected from the higher sales the hoax had produced.

Which is par for the course. Intolerance is now the norm, and no one’s more intolerant than the left. In order to provoke, I stopped our driver in front of a large house proudly flying the Confederate flag and admired it. Everyone was very polite. That’s Virginia for you. Among the many wrongs that PC has brought about is the adoption of ghetto language and manners by people who have never been near a ghetto or a project. We can thank Hollywood and television for violence and the f-word now being the norm.

A pretty female student served us drinks in an outdoor café facing the campus and I asked her if we needed to show her our draft cards. She looked confused. We used to have to register for the draft at 18, I explained to her, so we had phony ones in order to be able to legally drink. She thought that very quaint and she thought we, too, were quaint if a bit unconventional and strange.

After that it was mostly downhill. A little jolt of pleasure was seeing a large oak tree planted by Thomas Jefferson still standing and in perfect form, but even that reminded me of a very drunken picnic long ago under its branches. Mind you, the nicest part of the trip had to do with the people we celebrated Willy’s life with, all of them Americans, mostly Southerners, with wonderful manners and dressed for the occasion. The brother of the head of my fraternity told a story of how I had approached his brother and announced that I had broken the honor code and needed to leave the university at once. I then apparently declared that I had lied about true love to various girls at Sweetbriar, but the head would not hear of it. He correctly guessed that I needed to go to Palm Beach. “Did you mean it when you said it to them?” he asked. “Yes, definitely, I meant it every time,” I answered. “Well, then, it’s okay. You’re excused, and you’re staying put.” Too much honesty can cramp one’s style, n’est-ce pas?