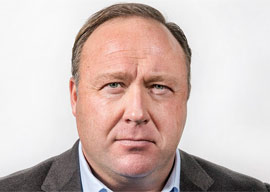 “There’s a war on for your mind,” Alex Jones has insisted for years. If that’s true, several more shots were fired last week, many of them aimed squarely at Jones.

It has been often said, but it apparently needs to be said so much more often and so much more loudly that ears start bleeding, that the endless calls to murder Donald Trump and to eliminate all white people—based on a baselessly cuckoo conspiracy that Donald Trump and all white people are calling for everyone else to be murdered—never seem to be crushed by the Big Tech Social Justice Hate Hammer for inciting violence or propagating false rumors.

To deny that Big Tech defines things such as “hate speech” and “conspiracy theories” through a strictly leftist ideological lens is to be either stupid, a liar, or a stupid liar who lies stupidly.

Since then, the warped corporate-progressive-totalitarian lust to choke and gag anyone who celebrates ideological diversity has only accelerated. YouTube relies on the insanely, um “urban” SPLC and ADL to flag any content remotely unpalatable to certain high-powered financial elites. When Google unveiled a fact-checking tool earlier this year, it only seemed to target right-of-center sites for scrutiny. Twitter recently banned Candace Owens—a black woman—merely for taking Dragon Lady Sarah Jeong’s anti-white tweets and substituting the word “Jewish” for “white.” And nearly every time the supremely unhateful Jared Taylor dares to pop up on YouTube, the video is almost immediately frozen and quarantined.

“To deny that Big Tech defines things such as ‘hate speech’ and ‘conspiracy theories’ through a strictly leftist ideological lens is to be either stupid, a liar, or a stupid liar who lies stupidly.”

I know of no similar instances of huge tech companies punishing leftists for thought crimes. I’m not saying they don’t exist, only that I haven’t heard of any, whereas the corporate “disappearing” of any little minnow bold enough not to swallow the Progressive Gospel hook, line, and sinker is a trend that only seems to escalate.

“But it’s not censorship because it’s corporations doing it rather than the government,” enthuse the very same people who hate corporations and cheer for suffocating levels of government intervention in every other aspect of life. Why is the snuffing out of non-leftist thought the ONLY case where these head cases LOVE the free market?

OK, so because of the First Amendment’s wording, none of this is technically censorship. But I’d like you to look me in the eyes and say it’s not “the deliberate silencing of certain ideas.”

In his trademarked overwrought fashion, Jones claimed he’d been targeted by the “globalist death star” and was the victim of a “coordinated communist-style crackdown”:

They disappeared me, like I have been airbrushed out of those old Soviet photos with Stalin, and as he killed each person, he had them airbrushed out. If this isn’t “1984,” baby, I don’t know what is.

Democratic Senator Chris Murphy of Connecticut took to Twitter—one of the only tech giants yet to ban Alex Jones—to applaud the mass shunning of Infowars:

Infowars is the tip of a giant iceberg of hate and lies that uses sites like Facebook and YouTube to tear our nation apart. These companies must do more than take down one website. The survival of our democracy depends on it.

“A giant iceberg of hate and lies.” Senator Murphy sounds like a little puddle of girlish emotions.

Without being specific—at all—Apple, YouTube, and Facebook all justified their snuffing of Jones because he allegedly violated their “hate speech” guidelines.

In its celebratory coverage of Big Tech’s ban on Infowars, The Daily Beast accused Jones of “Spewing Hate Speech,” of being robbed of “his largest platform to spew hate speech,” and of “spewing invective for years.” That’s three “spews” in only a few paragraphs. But just like the tech giants it fellates, The Daily Beast failed to cite even a word of all this “hate speech” that was allegedly being spewed.

Reducing someone’s opinions about complex socio- and geopolitical struggles over land, resources, and ideas to a simple matter of “hate” is a form of gaslighting. It also can’t be proved or disproved. It’s cheap, weak, and sick.

The mainstream media also can’t seem to burp out the name “Alex Jones” without also belching out the term “conspiracy theorist” in the same sentence.

These are people who run on moralism rather than logic, therefore it qualifies as hate speech if they hate it and it’s a conspiracy theory if it doesn’t neatly tie into their conspiracy theory about white males plotting mass slavery for white females and mass extermination of all nonwhites.

Again and again, the mainstream media justified Jones’s silencing by claiming he’d spread untrue rumors about the Sandy Hook school shooting, about Pizzagate, and about 9/11. I don’t know enough about any of Jones’s positions on these events to have an opinion either way.

What I do know is that this is the same mainstream media that spread false information, and also withheld crucial information, about the Rodney King incident and the Trayvon Martin incident and the Michael Brown incident to the point where dozens of people wound up dead and far more were beaten up, but even I—an alleged fascist totalitarian—am not calling for any of these outlets to be banned, only corrected.

Yes, there are idiotic conspiracies. But yes, the powerful also conspire to maintain power. Using “conspiracy theorist” as a blanket pejorative is rank gaslighting. Better to be “paranoid” than gullible.

For years I’ve had my own personal conspiracy theory about Alex Jones himself. One moment he’s posing entirely legitimate questions about government malfeasance and global finance—questions that the mainstream media desperately avoids because they’re in cahoots with both the government and global finance—but the next, Jones is taking off his shirt and screaming until he’s beet-red. It is this mix of raising legitimate questions about powerful institutions and acting like a fucking lunatic that I find troubling. I’ve often suspected that Jones, more than anyone else in the modern era, is a tool of some government psy-ops program designed to forever cause you to conflate the mere act of questioning authority with full-blown mental illness.

There’s plenty of hate out there—especially the type you never hear about because the powers that be deny that it even exists. And there are plenty of conspiracies, but those who attempt to unmask them don’t last long.

I can’t imagine being so upset at any form of hatred, or at listening to even the most cockamamie conspiracy theory, that I’d want to silence the person “spewing” it. That’s because I’m neither an infant nor a totalitarian. But when it comes to the urban bugmen who run Big Tech, you have a group of borderline males who are wearing diapers under those skinny jeans. There’s something new and supremely disturbing about a vengeful nerd with the power to flip the OFF switch on you.