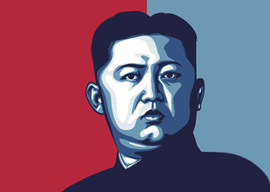 The world is filled with tough guys who say they are going to smash your face in but never throw a punch. Whether it’s a barroom blowhard or Asia’s Big Bluffer, few things irritate me more than a jackass who is long on words and short on action.

Such is the case with Kim Jong-un, who is forever telling the world how big and bad he is. He cuts “all lines of communication” from North Korea…except the military phone that was open until quite recently. He ceases all contact with the outside world…yet until this week he exempted the North-South cooperative that employed hundreds who worked between the two nations daily. He bombards islands…that are sparsely inhabited.

Obviously, in those acts there was collateral damage and some lives lost, but this is mostly the stuff of a hothead punching a wall to demonstrate his strength. Witnesses are supposed to be frightened and they usually are; as long as no one notices, the boaster never actually takes on anyone else and confines himself to attacking plaster.

“How can we be certain Kim Jong-un will do nothing? Because he constantly claims he will do something.”

This is not to say there is no North Korean threat. Any bellicose nation with an unbalanced leader should not be entirely dismissed. Yet Kim is not nearly so unhinged as some would have us think. If he were, those 50,000 troops on the border would have swarmed the South in the middle of the night without so much as a hat tip to Western powers.

Would such a move be suicidal for the regime? Likely. Would it be futile? Eventually. Would it initially succeed? Probably. One can never underestimate the explosive power of 1,000,000 souls of cannon fodder.

There is high likelihood of success in such a maneuver, even in spite of millions of landmines, because almost no high Western (or South Korean) official takes such a threat seriously, at least not if there aren”t any cameras rolling.

American troops are in South Korea not because of North Korea but because of China. These forces are just pawns on the chessboard of global dominance. Were North Korea and China not strategic allies and mutual Western opponents, the United States would have little interest in stationing anyone there.

While a maniacal Kim has only one objective”forceful reunification”the Americans have multiple considerations. How would China react? Might another ground war in Asia remilitarize Japan? What would be the position of the other Western powers, especially now that so many European nations have significant Asian constituencies?

Any American military resistance overcome in the first few hours would likely be the sole response for at least a day, perhaps more. Nuclear weapons would be out of the question. Mass insertion of additional troops and remarshaling the disoriented units already present would take time. That is on the assumption Western populations would be inclined to engage in another conflagration so soon after the two in the Middle East. Even President Peace Prize might have trouble convincing his people to fight another war.