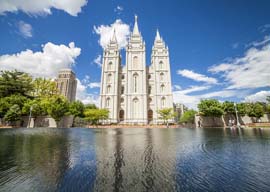 Apparently, Mormons have a pathological hatred of Polynesians. Who knew? I certainly didn”t, until last week’s perfunctory “look how racist those white devils are” national news story brought it to my attention. It seems a bartender at a Salt Lake City joint called Big Willie’s pulled a large boner by refusing to serve two Polynesian gentlemen, supposedly just for the hell of it.

“Salt Lake City bartender says “I can”t serve Polynesians” to would-be patrons, causing owner to apologize after outcry,” screamed the New York Daily News (your go-to source for everything Salt Lake City). What made the national coverage so unintentionally funny was that in every instance, the female bartender’s actions were presented completely shorn of context. “Racist white chick hates Pacific Islanders for no reason…film at eleven.” Following the media firestorm, the bar apparently received numerous threats of violence, and one of the Polynesian gentlemen who was denied service has publicly called for the bar to be “punished.”

What made me take notice of the story was the random, context-free presentation. Why Polynesians? Was there anything the press was leaving out? I took a good guess regarding what it might be. Attending a majority-black high school in the early 1980s, I vividly remember that the only people who instilled true fear in the black gang members who benevolently dominated our campus were Samoans. The Samoan gangs that thrived south of L.A., from Carson and Hawthorne to Long Beach, scared the livin” bejesus out of even the most hardened black gangsters. “I”m glad we ain”t got none of “em up here,” a gangbanger friend named Little Tony once told me. “You can empty an entire clip into one of them Samoan mutherfuckers and he”ll keep on comin”.”

The average size and overall fearlessness of the Samoan gang members were legendary. So after reading the Big Willie’s story, I couldn”t help but wonder if Samoan gangs had anything to do with the context that the national media was so helpfully protecting us from.

Of course, I was right. Tongan and Samoan gangs are a major problem in SLC. In recent years, the Tongan Crip Gang, made up of Tongans, Samoans, and other Polynesians, has been terrorizing bars and convenience stores in and around the city. It’s generally considered SLC’s single worst crime problem at present.

“At the moment, music remains one of the few legal avenues club owners have to control the makeup of their establishment.”

I asked a good friend who lives near SLC for his opinion of the Big Willie’s incident:

There is a fairly sizable Polynesian population in Utah. Mormon missionaries had some incredible success in Samoa particularly but other places as well. It’s not like the Salt Lake Valley is overrun with Samoan gangs but yes, there is a problem, especially in SLC. Also, two pissed off, 350 pound Polynesian dudes, drunk or otherwise, could take out most any bar here. I read one of the articles and I felt sorry for the position the bartender was in, but I”d bet dollars to donuts she was just trying to keep the place from getting trashed. The article I read mentioned that the bar’s rule wasn”t “no Polynesians” per se, but that when it was only the two female bartenders, they had discretion to bar anyone from coming in that looked like they might be trouble. Of course that’s a recipe for disaster in the age of butthurt, but I really doubt it had anything to do with any specific animus toward South Pacific people.

Naturally, the owner of Big Willie’s has profusely apologized online, and he’s attempted to make amends with the two gentlemen who were refused service. Time will tell what “punishment” is in store for him, although he’s made it clear he”ll be punishing his employees by forcing them to undergo “racial sensitivity training.”

This episode made me reflect upon my time as an event organizer (for my Republican Party Animals organization) in and around L.A. For a good six years, I got to know and work alongside many club owners, and it was always fascinating to witness how they handled the delicate matter of avoiding gang violence. There are two unfortunate, inconvenient facts associated with owning a bar in Los Angeles: If your bar becomes a popular hangout for black customers, if your establishment becomes known as a “black bar,” you will almost certainly, at some point, have a gang shooting.

The other unfortunate fact is, once a gang shooting occurs in a bar, that bar never recovers. Non-gang-related acts of violence are different; people can overlook the occasional random fight or stabbing. People get drunk, people get argumentative, those things happen. But gang violence is an entirely different animal, especially because gang violence usually leads to gang retaliation. If a bar becomes tarred as a battleground for gangs, the owner can consider every dollar he’s spent and every ounce of energy he’s invested in his establishment to be irretrievably pissed away. That bar is finished.

This isn”t even a racial thing”it’s true of Italian Mafia killings as well (not that those are much of a problem anymore). This was depicted in a season 1 episode of The Sopranos, in which Tony Soprano, who’s learned that the family bosses plan to conduct a hit at his friend’s restaurant, burns the joint to the ground when he can”t persuade his superiors to move the hit somewhere else. Tony understands that his friend can rebuild from a fire, but a Mob hit would mean a permanent end to his business.

In L.A., location doesn”t necessarily determine a bar’s clientele. People in this town are used to driving, and the demographic makeup of a bar is generally based not so much on area, but atmosphere. Back in the days of my youth, in the neighborhood I lived in, there existed a posh Westside nightclub called the Century Club, located in Century City, the pricey business and residential area once considered so futuristic-looking, it was used as the setting of the city-of-the-future featured in Conquest of the Planet of the Apes (the fourth film in the original Planet of the Apes series). In the mid-1990s, the Century Club decided to become “diverse,” changing its music and vibe to attract, as the L.A. Times phrased it in a laudatory article praising the club’s transformation, a “multicultural” crowd.

See, you can”t just come out and say “black,” even though everyone at the club, at the Times, and in the neighborhood understood that’s what it meant.

Within a few years, there was, of course, a gang shooting. A rap show resulted in gang gunfire that left one dead and several injured. The club went under, and the building was demolished, replaced by an entertainment-industry office complex, filled no doubt with execs working feverishly on movies and TV shows extolling the virtues of multiculturalism.

Not only can gang violence kill a club, it can actually kill an entire shopping district. In the 1980s, the weekend hub of shopping and clubbing was Westwood Village, a then-thriving district of retail and restaurants next to UCLA on the L.A. Westside. Westwood was always bustling with shoulder-to-shoulder foot traffic, to the delight of business owners. Unfortunately, in 1988, two rival gang members partying in the village got into a shoot-out (of course), and 27-year-old bystander Karen Toshima, a graphic artist who was doing some window-shopping, was fatally nailed in the head by a bullet. Soon after, Westwood became a ghost town. It took nearly twenty years for the district to recover, but the bars never came back. They were replaced by Whole Foods, Trader Joe’s, organic restaurants, and movie director Kevin Smith’s “buy my overpriced crappy memorabilia” shop.