Bikers in the White House 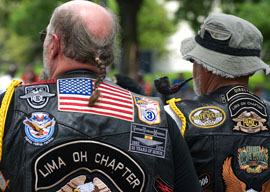 OMAHA, Neb.”Several years back, two Hell’s Angels showed up in Dallas to give me an award.

It was a gold-plated ball-peen hammer mounted on wood, which was a reference to the most notorious scene in the pseudo-documentary Hell’s Angels Forever. At the time I was the only critic who”d ever reviewed that movie, and the Angels were especially grateful because they”d made it themselves. They believed all the biker movies of the late “60s and early “70s portrayed them in a bad light, so they decided in 1972 to “make our own movie” and set about getting people to carry 16-millimeter cameras into bars where they were partying. Since feature film editing was not one of the Hell’s Angels” strong points, they didn”t finish it until eleven years later. Then none of the major theater chains would play it, despite the fact that Willie Nelson, Bo Diddley, and Jerry Garcia all donated music to the soundtrack. It finally opened in a few drive-ins in the Deep South, and I booked it at the World Drive-In Movie Festival and Custom Car Rally. To celebrate, they gathered at their clubhouse in Ventura, Calif., decided to give me an award, and set out on a run to Dallas.

Here’s where it gets interesting. The indoor part of the festival was held at the Inwood Theater, managed at the time by my cohort Bob Berney, now head of marketing and distribution at Amazon Studios. On opening day, I was on stage in the upstairs screening room introducing a movie when Bob suddenly interrupted.

“You”ve gotta come downstairs right now,” he told me. “The Hell’s Angels are here, and they”re saying that unless you”re on stage with them in five minutes, they”re gonna bust up the place.”

Implied in that threat, apparently, was that they would also have to bust me up.

Needless to say, I quickly made my way to the main stage, accepted the Ball-Peen Hammer Award, which I treasure to this day, and conducted an interview with George Christie, the legendary Ventura chapter leader. One of the questions from the audience was “Is it true that you guys make all your money from narcotics and prostitution?”

Christie grimaced, as though offended, and said, “Not all of our money.”

Afterwards I knocked back a few beers with Christie and another Angel that I”ll just call “Animal.”

George Christie is one of the most articulate guys to ever don Angel colors, but Animal was 300 pounds, a little earthier, and a lot more standoffish.

After a while I said, “Were you guys really gonna beat me up?”

“Well, the way it works,” Christie said, “is that I might not want to beat you up, but if Animal here decided that he wanted to beat you up, I would have to join in.”

“The rest of the world is hating on you, but that’s a good thing. That’s proof that you”re an outlaw.”

I was reminded of this Angels principle while rereading that great study of the French Revolution”you gotta hang with me this week, we”re covering a lot of ground”written a decade or so ago by Eli Sagan. It’s called Citizens & Cannibals: The French Revolution, the Struggle for Modernity, and the Origins of Ideological Terror. And it’s not so much history as an extended study of why some countries can handle democracy and some can”t ever do it right. Even France couldn”t do it right for a long, long time. And the most common reason countries fall apart is that they can”t get that “loyal opposition” thing down. After every election, the losers are so mad they wanna kill the winners”so, in order to avoid being killed, the winners go ahead and get proactive and kill the losers.

Anyway, in Sagan’s main passage, he goes over all the countries that have transitioned from the Middle Ages into modernity (some aren”t there yet), and he notes that there are only six kinds of government that ever result. Five of them are bad.

The one you”re shooting for, of course, is Stable Democratic Society”the United States, Canada, England, Australia, most of Europe.

But you don”t usually end up with that. As Jimmy Carter can tell you, you can have free and open elections, all the trappings of a modern state, and still end up with one of the other five:

Gangsterism (Russia in the “90s), which can also take the form of Military Despotism (Burma, Portugal in the “80s)

But I think Eli Sagan left one out. I think societies transitioning from medieval to modern can also go through a phase called:

Numero Uno: Motorcycle gangs are superpatriotic in a tribal way. Go to any federal prison where cycle gangs are locked up, usually on narcotics, racketeering, and extortion charges. They have American-flag tattoos, they believe America is the best at everything, they”ll whale the crap out of anybody who disrespects the country, and they”re especially hostile toward foreigners who are mucking up the amber waves of grain. Cycle gangs were started in the late “40s by World War II Air Force veterans, so they”re willing to die to “Make America Great Again.”

Numero Two-o: The band of brothers is more important than anyone outside the clan. “I may not want to beat you up, Joe Bob, but if my brothers do, then I have to join in.” This is basically what Homeland Security Secretary John Kelly said to the president of Mexico last week.

Numero Three-o: Motorcycle gangs sometimes pick fights to show their dominance. They”ll fight over stuff that seems ridiculously petty to the public, like who can drink in which bar, who can park bikes on a certain street, which names belong to which club, which patches can be used on a jacket, or which restroom you”re allowed to use.

Numero Four-o: Motorcycle gangs have “One Percenter” patches. Unfortunately the phrase has been appropriated to mean “billionaires””the top one percent in terms of wealth”but originally it was a response to the Hollister Riot in 1947, when the American Motorcycle Association said 99 percent of motorcycle riders are law-abiding citizens and so we shouldn”t judge by the one percent. A One Percenter says, “Judge by me, I”m outside the rules, I”m an outlaw.” If you”re in a weaker gang”one of the 99 percenters”then the best you can hope for is to wear a support patch saying you”ll back a dominant gang. The Hell’s Angels would never wear a support patch, nor would the Bandidos, the Pagans, or the Outlaws. But the Real Kings of South Carolina, to use one example, wear patches supporting the Outcasts. Other examples of weaker “support” gangs who back the principal outlaw gangs are the Red Devils, the Black Pistons, the Tribe, the Blitzkrieg, the Thunderguards, the Amigos, the Pistoleros, and the Republican Party.

Numero Five-o: Every once in a while somebody has to go to jail or go into exile for the gang. During this time you can have no contact with the convict, because that would constitute another felony, but that doesn”t mean he loses his colors or that he won”t be welcomed back at a later date. Examples would be Michael “Bandido Tick” Mensen (24 years for racketeering), Outlaws leader Taco Bowman (two life sentences for racketeering and murder), Ghost Riders leader Karl Twilleager (17 years for murder and conspiracy), and Michael Flynn.