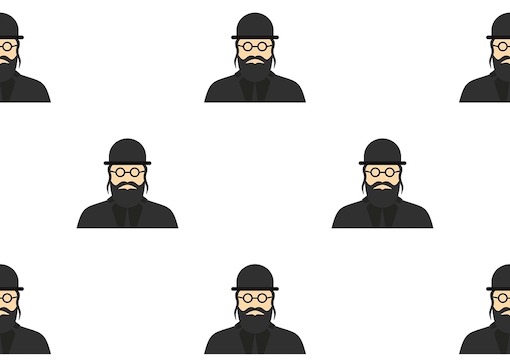 On Tuesday, in the Williamsburg section of Brooklyn, New York City mayor Bill de Blasio personally oversaw the dispersal of thousands of Hasidic mourners who had gathered for the funeral of a rabbi who died of the coronavirus.

“Something absolutely unacceptable happened in Williamsburg tonite: a large funeral gathering in the middle of this pandemic,” de Blasio tweeted afterward. “When I heard, I went there myself to ensure the crowd was dispersed. And what I saw WILL NOT be tolerated so long as we are fighting the Coronavirus.” And he added:

My message to the Jewish community, and all communities, is this simple: the time for warnings has passed. I have instructed the NYPD to proceed immediately to summons or even arrest those who gather in large groups. This is about stopping this disease and saving lives. Period.

And yet, by Wednesday afternoon de Blasio already seemed to be trying to cover his ass, tweeting:

On #YomHaatzmaut we pause to recognize a country and a people whose strength and perseverance in the face of adversity, hatred and evil are an inspiration to all of us. To all who celebrate: Happy Israeli Independence Day.

What happened in the interval? What happened, it goes without saying, is that de Blasio faced a lot of silly charges of “anti-Semitism.”

As Liam Stack has related in The New York Times,

The authorities have dispersed several well-attended religious gatherings since restrictions on such events were enacted in the face of the outbreak. The events that were broken up included weddings and funerals in New York neighborhoods with large Jewish populations.

In other words, as in Lakewood, New Jersey—an area that also has a large number of Orthodox Jews—a disproportionate number of Jews in New York City violated the social restrictions, and in both locations the violations concerned important religious practices (weddings and funerals). Still, it’s been true since the end of the Second World War that anything negative concerning Jews will be met with reflexive cries of “anti-Semitism,” and so it was in this case.

Thus, Chaim Deutsch, a City Council member who represents a section of Brooklyn with a large Orthodox Jewish population, said on Twitter:

This has to be a joke…Singling out one community is ridiculous….Every neighborhood has people who are being non-compliant. To speak to an entire ethnic group as though we are all flagrantly violating precautions is offensive, it’s stereotyping, and it’s inviting antisemitism. I’m truly stunned.

Well then, have a drink, poor fellow!

“Whether one agrees with the social restrictions in place in New York City or not, they do apply to everyone.”

We need to ask: Just how was de Blasio “singling out one community”? For though Deutsch is certainly right that “every neighborhood has people who are being non-compliant,” de Blasio was also right when he said at a press conference on Wednesday:

Let’s be honest…. This kind of gathering has happened in only a few places and it cannot continue. It’s endangering the lives of people in the community. I understand politicians, every one has said, “Oh look, you know, this is like people gathering in the park.”… No, it’s not like people gathering in the park. It was thousands of people. Can we just have an honest conversation here? It was not acceptable.

Here “in only a few places” means places with lots of Jews, and clearly there is a big difference between a religious gathering consisting of a few hundred or a few thousand people (i.e., what de Blasio meant by “this kind of gathering”) and, say, a neighborhood pickup basketball game.

As it happens, a disproportionate number of blacks lack voter identification cards. But, contra leftist paranoia, it hardly follows from this that the purpose of such cards is to “target” blacks, as if everyone didn’t have to use them in order to vote. Likewise, whether one agrees with the social restrictions in place in New York City or not, they do apply to everyone; but if it happens that Jews disproportionately violate them, then good police work will reflect that group difference.

Speaking of good police work, Dermot F. Shea, the New York City police commissioner, was quite right to criticize events such as the funeral on Tuesday for putting police at unnecessary risk.

Nor is it clear that de Blasio implied that “an entire ethnic group” was “flagrantly violating [the] precautions.” Yes, he used the phrase “the Jewish community,” as he did the phrase “and all communities,” but with respect to the particular funeral in Williamsburg, what language should he have used? Plainly the persons in question were not Chinese or other gentiles, but Jews attending a Jewish funeral. True, de Blasio could have been more precise—saying “the Hasidic Jewish community” instead—but anyway, in context the view that language such as “the Jewish community” entails “singling out” is absurd; and the view that such language “invites anti-Semitism” is even more so. (Besides, I suspect that even if de Blasio had been more accurate, Deutsch and others still would have been “offended”; they still would have felt “singled out.”)

And it’s not sensible, either, to interpret de Blasio (a man not known for exactitude in language) as saying that all Jews in New York City were “flagrantly violating [the] precautions.” The truth, however, is that men like Chaim Deutsch perceive reality itself from a victimist point of view, and hence they are forever reading their own anxieties, fears, and “issues” into things. Moreover, they get paid to do so. They are elected to do so.

Although the list of official victim groups is ever expanding, there is no doubt that any adequate list would include blacks, Hispanic immigrants, women, gays, and Jews (fascinatingly, the sole victim group on the right). All of these groups, indeed, contain numerous persons who peddle a professional victimist agenda. Thus, Jonathan Greenblatt, the National Director and CEO of the Anti-Defamation League, declares on Twitter: “The few who don’t social distance should be called out—but generalizing against the whole population is outrageous especially when so many are scapegoating Jews.”

In a post on Twitter, the Orthodox Jewish Public Affairs Council has complained, with reference to de Blasio’s controversial words, “that thousands of New Yorkers [also] failed to [social] distance for 45 minutes to watch a flyover.” But this is nothing but petty whataboutism. If you wish to be ethically consistent, rather than a mere hypocrite, then you cannot gripe that “your group” didn’t receive an exception; what you must do is call for consistent enforcement of the general law or rule.

I was struck this week by a friend’s comment on social media regarding “the community tensions” in New York City (I am withholding his name in order to protect him from any personal or professional repercussions):

This may get bad. My friend is a police officer in Brooklyn. He tells me that the community tensions between the ultra-Orthodox Jews and everyone else are already very high. He says that they commonly provoke fights with NYPD officers and then claim anti-Semitism. They also have a lot of political power in New York. That coupled with mayoral overreach could have terrible results. I remember the Crown Heights race riots between black people and Jews in those same neighborhoods.

Smart and shrewd words these seem to me. As I have said elsewhere, Jews on the right are like Black Lives Matter on the left: Each is a kind of special victim group that is supposed to be beyond criticism or reproach, embodying what Bertrand Russell called “the superior virtue of the oppressed.” And yet, gross partisanship is the norm in human affairs, and here Jews are of course no exception. Neither are they an exception in their tendency to try to use actual past evils (the Holocaust, anti-Semitism in the U.S. and in Europe) to advance their current interests, even if that involves manipulation. Indeed, in all so-called victim groups there are many base partisans who act as if they have only to utter certain magical words—“the patriarchy,” “the gender wage gap,” “systemic racism,” “anti-Semitism”—and presto! other people should just do whatever they please.

But we should recognize that such hubris “coupled with mayoral overreach could have terrible results.” Besides the increased racial tensions and problems, Jews themselves should recognize that finding “anti-Semitism” behind every nook and cranny invariably leads to the real thing itself. Hence, for example, the many people on the internet who, in their resentment toward Jewish manipulators and gatekeepers, think that—somehow, someway—everything that is wrong with the world is the fault of the Jews.

Having so far been altogether critical of facile notions of Jewish victimization, let me end by expressing a little gratitude. Few things, after all, have amused me more over the years than the faithful spectacle of politicians and right-wing journalists tripping over themselves to denounce “anti-Semitism” and to profess their undying love for Israel—“our greatest ally,” you know. Besides the high comedy they provide, such persons are tremendously refreshing, since in a time when almost nobody has the spine to be what he really is, they readily show us that, like whores on the corner, they are for sale and had cheap.