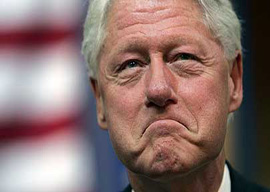 From roughly 10:13PM to 2:05AM Eastern Standard Time, I passively and resentfully endured a shamelessly self-congratulatory spectacle dubbed “A Decade of Difference: A Concert Celebrating 10 Years of the William J. Clinton Foundation” livestreamed on my computer. By the end, I knew that if Bill Clinton truly understood anything about being charitable, this concert would not have lasted more than ten minutes.

On this special evening at the Hollywood Bowl, Bill Clinton opened his heart to the world to show them how big it is. For four hours, the famously horny ex-president invited the world to thank him for helping the world and to beseech their help so he can continue helping them. He was clearly glad—nay, eager—to let the world know how aggressively charitable he’s been in the decade or so since he relinquished the presidency. He hasn’t exactly frittered away the last ten years—au contraire, he’s been running around the globe and empowering the SHIT out of people! Mr. Clinton, flanked by Hillary and Chelsea, sat beaming in the audience, celebrating this celebration of himself and marinating in his own goodness to the point where it appeared to give him a mild case of rosacea. For the duration of a live musical event that lasted a full forty minutes longer than the film Gandhi, we learned what a charitable, loving, wonderful man Bill Clinton is—not merely a good man, but a great, great, great, great, GREAT man—and don’t you dare forget it!

The $1,000-a-seat concert was a star-spackled event. The cool night air sparkled with human beings being humanitarian, gathering together to celebrate the founding of Clinton’s foundation, or to put it more succinctly, Clinton’s foundation’s founding. Ashton Kutcher was there, as inarticulate as ever. Professional full-time lesbian Ellen DeGeneres mumbled something about how Bill and Hillary have made the world a better place.

“On this special evening at the Hollywood Bowl, Bill Clinton opened his heart to the world to show them how big it is.”

Surprise opening guest Stevie Wonder sang his blind ass off and did that thing where he shakes his head back and forth, causing his balding dreadlocks to sway along with the beat. Neo-C&W singer Kenny Chesney, through his body language alone, spent his entire set trying to deny that he’s gay. For one song, he trotted out a girl singer in a failed attempt to prove he’s a heterosexual. I may have heard a lyric about a crawdad at one point. A Muslim Somalian singer/rapper who looks like Michael Jackson after a crack binge named K’naan performed, and if there’s anything America needs, it’s more of those. Abdominally gifted singer Usher accidentally ripped his pants and joked to the audience about how he works “hard.” Lady Gaga and her dozens of gay dancers sang that song about how she was born that way, when she plainly wasn’t born that way and is obviously lying. Righteous Irish rodent Bono from U2 and his guitarist The Edge inflicted an unforgivably pious acoustic set upon the world. I’d estimate I slept through at least 10 minutes of it, and I’m a better man for it.

Through all four hours, Bill, Hillary, and Chelsea seemed stubbornly determined to prove that no one in their family has any rhythm.

Toni Morrison dubbed Bill Clinton the “first black president,” so I guess it follows that he is also the first black ex-president. This may partially explain the gross ostentatiousness of Saturday night’s event, reeking as it did with a level of cheesy self-importance one might expect from Diddy or LeBron James.

So…why a concert? Exactly what “difference” has Bill Clinton’s tax-exempt foundation made in the past decade, and why do we need to be singing about it? On a red-carpet event before the concert, Colombian actress Sofia Vergara tried explaining:

I think, you know, when somebody is as popular as him, and he, you know, has the power to bring so many people together, to bring these names, to bring people that can, you know, really, you know, make a difference [laughs]. It’s amazing, it’s amazing that he’s doing all this work.