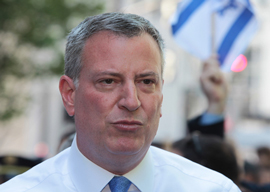 When Bill de Blasio crushed his Republican rival, Joe Lhota, by 49 points in 2013, more than a few New Yorkers were worried. De Blasio was an unabashed leftist who proudly served with Nicaragua’s Sandinistas and fervently condemned economic inequality, especially the pro-business administration of billionaire Mayor Bloomberg.

The revolution seemed imminent, and his January inaugural speech made the redistribution agenda explicit: “We are called to put an end to economic and social inequalities that threaten to unravel the city we love. And so today, we commit to a new progressive direction in New York. And that same progressive impulse has written our city’s history. It’s in our DNA.” Indeed, his call for higher taxes on those earning more than $500,000 seemed to be purely a Marxist gesture designed to affirm his hate-the-rich radicalism.

“He has made the city’s poor so dependent on government for their daily existence that a revolution to upend the status quo is now unthinkable. Why would any poor person riot when that might interrupt the conveyor belt of government-supplied goodies?”

Six months have now passed, and the revolution has yet to happen. In fact, contrary to the fears of many, the prosperity of the Bloomberg era has not abated and no evil hedge fund manager has been put in irons. The superrich are still buying luxury condos, rents remain high, tourism still flourishes, and the NY Stock Exchange is at record levels. The wait for seating at the city’s most expensive restaurants remains a month or more. Meanwhile, Wall Street has reacted positively to the city’s forthcoming $850 million bond sale.

In a nutshell, de Blasio has turned out to be less a Lenin and more a Santa Claus and this pleases everyone. Unlike past soak-the-rich revolutionaries, he has ignored inequalities in power and instead uses government to bestow countless social welfare benefits on the poor. He has made the city’s poor so dependent on government for their daily existence that a revolution to upend the status quo is now unthinkable. Why would any poor person riot when that might interrupt the conveyor belt of government-supplied goodies? Thus understood, Mayor de Blasio’s policies are conservative in the sense of strengthening the status quo, even if that status quo undergirds capitalism.

The mayor’s goodies list is immense. As promised in his campaign, parents will get more “free” preschool while Washington’s minimal work requirements for receiving food stamps will be skirted to the point where doing nothing will still put bread on the table. (And education and training are now job generating activities: instead of financially pressuring the poor to find work, more people will be hired to prepare them for future employment.) To ensure continued welfare checks, efforts to certify eligibility will be sharply reduced. The mayor further hopes to create or preserve 200,000 units of affordable housing; he”ll add more subsidized housing for the homeless while beefing up anti-eviction measures (like the Family Eviction Prevention Supplement). His “radical” agenda also includes a higher local minimum wage and asking Obamacare employees to enroll applicants in all available federal social welfare programs. I suspect the upshot of these policies will be to diminish the supply of entry-level jobs, thus leading even more city residents to obtain government benefits since “they can”t find work.”

Thus the slogan “Workers of the world, unite! You have nothing to lose but your chains“ has been replaced with “The poor of New York City, overthrow your rich masters”you have nothing to lose but free food, cheap subsidized housing, free cell phones, free ER medical care, access to ATMs for instant cash, free daycare, and abundant other government-supplied benefits, all now certified human rights!” Even middle-class folk will think twice about taking to the streets to smash the “oppressive” regime. How many of them will risk their well-paid sinecures in education or government and all the rest of the booty necessary to the ample consumption that today defines the “middle class”?