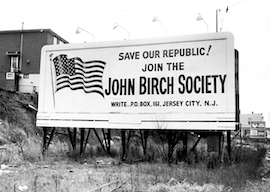 A paranoid is someone who knows a little of what’s going on.” ―William S. Burroughs

Kicked out of the National Review bio-dome by William F. Buckley in the early ’60s, the John Birch Society has been considered the kooky uncle of the American right for decades. For conservatives at social gatherings not wanting to appear too extreme, the phrase “But it’s not like I’m a member of the John Birch Society or anything…” has been a soothing assurance. And yet it’s 2019, things have moved fast: The “paranoid style in American politics” is all the country has left. Almost all Americans are the kooky uncle now. The defeat of “the Birchers” has proved to be like Obi-Wan Kenobi’s death: struck down, sure, but now more powerful than their opponents could have possibly imagined.

In 1962, around the time they were banished from NR, Bob Dylan released his satirical song “Talkin’ John Birch Paranoid Blues.” Dylan’s narrator is so busy hunting down communists in the USA (and praising Hitler, since those two things go together, you see) that he eventually investigates himself for being a communist. (It’s worth noting that in real life Bob Dylan was pretty conservative, or became conservative, and as early as 1967 talked privately of supporting George Wallace for president.)

In his book The Betrayal of the American Right, libertarian superhero Murray Rothbard recalled the origin story of the JBS:

The National Association of Manufacturers (NAM), in those days before big business-corporate liberalism had conquered it in the name of a “partnership of government and industry,” took a firm laissez-faire line. Its staff economist, Noel Sargent, was a believer in the free market, and the dean of laissez-faire economics, Ludwig von Mises, was one of the NAM’s consultants. In those days, NAM was largely small-business oriented, and indeed, various small businessmen’s organizations formed the business base for the organized right. Indeed, it was in the high places of the NAM that Robert Welch learned the anti-Establishment views that were later to erupt into the John Birch Society.

In the same book, Rothbard accuses National Review of possibly being a CIA operation to turn the “right wing from an isolationist to global warmongering anti-Communist movement.”

At any rate, Robert Welch formed the JBS in December of 1958 (the same month Taki writer Steve Sailer was born. Another coincidence??), after having made a fortune joining his brother in the candy business (thank them for Sugar Daddies and Junior Mints, among others). Indeed, Welch’s career reads like if Gene Wilder’s Willy Wonka retired from candy-making so he could create and host InfoWars with Alex Jones.

“Almost all Americans are the kooky uncle now.”

The John Birch Society either coined or popularized numerous terms that were a staple of conspiracy literature but now, in 2019, are part of normal (“normal”) American life. Where would any YouTube clip be without talk of the “New World Order” somewhere in the comments? In recent years pop stars have to deny rumors that they’re involved in the Illuminati, professional basketball players have been scandalized for voicing their beliefs that the earth is flat or that the moon landing was fake, and every political candidate of whatever flavor will be accused of being in the pocket of a foreign government. According to a 2014 study published in the American Journal of Political Science, “half of the American public consistently endorse at least one conspiracy theory.”

Half? I’d imagine that it’s closer to 80%. America loves conspiracies, and that’s reasonable given this country’s history: If you’d spent 250 years being told your country fomented a revolutionary war that was a mere reaction to an unfair “tea tax,” you’d believe in conspiracy theories and secret histories too.

The number of American leftists who believe in conspiracy theories is close to 100% when you remember that Marxism is a conspiracy theory (in the villain’s role that was historically meant for Jews, Marx expanded the bad-guy tent and said it was a larger class, not just a race, that was out to get you). Likewise, Christians who believe Satan and devils to be personal beings, and not airy metaphors, have a built-in explanation for evil’s seemingly intelligent design throughout the ages. As Eric Hoffer said: “Mass movements can rise and spread without belief in a god, but never without a belief in a devil.”

The Birchers understood a deep truth that explained their twin interest in fighting communism and secret societies: The Communist Party was essentially a secret society. Historically, CPs have always obtained power in darkness or deceit, never through democratic mandate or with any transparency. In some communist countries, to know just who were members and party leaders, what the connections were and where key decisions went down, remains, to this day, a riddle for historians (especially in the history of the Chinese Communist Party).

As mentioned earlier with the Dylan song, the Birchers were the original group that believed that Russians had infiltrated the American government—even at the highest level (Welch called Eisenhower “a dedicated, conscious agent of the Communist conspiracy”). Sometimes their theories even went viral. In June of 1968, Truman Capote went on The Tonight Show With Johnny Carson and shared with the public the conspiracy theory, popularized by the JBS, that Russian revolutionaries had infiltrated American politics. He said Sirhan Sirhan, who had just assassinated Robert F. Kennedy days before at the nearby Ambassador Hotel, was motivated by the late Russian spiritualist Madame Blavatsky and her book Manual for Revolutionaries, which supposedly called for political revolution by assassination of world leaders. In 2019, there is an entire cable network, apparently called MSNBC, that is dedicated to 24/7 Russian-infiltration conspiracies of this ilk.

The script is now flipped. The people who laughed when Reagan called Russia “the evil empire” now agitate for a second cold war with Russia. One of the JBS’ cofounders, Fred Koch, was the father to the wealthy “Koch Brothers,” the libertarians who were supposed to have rigged the 2016 Republican primaries for their candidate (many liberals go to bed at night wishing the Koch Bros. had purchased the 2016 Republican nomination). In 2016, Bernie Sanders would advocate against open borders and for national sovereignty (Bernie 2020?), telling Vox’s Ezra Klein, “Open borders? No, that’s a Koch brothers proposal.”

And so the children of the anti-globalist John Birch Society became open-borders globalists, the target of their own conspiracy theory from Bernie Sanders, himself a socialist who once lived on a kibbutz in Israel. Truly, we’re through the looking glass here, people. This historical twist speaks to the way capitalist countries, to increase growth, turn globalist, and the way that socialist countries, to merely sustain themselves, turn inward and nationalist (see: Israel, Russia under Stalin, North Korea, et al.). Capitalist countries refuse to build walls so that noncitizens can run in (and be cheap labor); socialist countries build walls to keep citizens from running out.

The John Birch Society’s mistaken attitude was in believing that communism represented an exclusively foreign menace seeking to overpower sweet and virginal America. What they missed was that communism and America had already been enjoying a clandestine, and quite consensual, romance. They also underestimated the socialist rot in American society and how far back it might’ve gone. The accusation that Dwight Eisenhower was a communist is only ridiculous if you think that he was a Soviet communist secretly working for the Russians. The charge becomes less ridiculous if you know that forms of communism, socialism, and revolutionary politics have their own secret history in America, in various forms, going back decades if not longer. For instance, a long time ago, the premier British socialist could get the attention of the President of the United States on his first day in office and lecture the president on his plan to replace the “individual selfish system” with a “united social” one. The socialist was Robert Owen and the president whose ear he had was John Quincy Adams. The year was 1824.

Still, the lesson of the John Birch Society is a valuable one because reactionaries are most often the ones who propel us forward.