Birth of a Civil War Buff 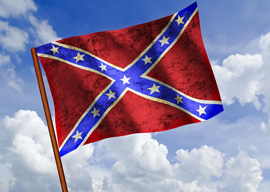 Growing up in England, one didn’t hear much about the American Civil War. England’s own Civil War loomed larger in our education and imaginations, though it had been fought two centuries earlier than the American conflict.

A key battle in our Civil War took place a dozen miles from my hometown. As school kids, we were bused out to see the battlefield, which we all thought boring“just a field, for goodness’ sake, with a crumbling stone monument. We all knew Yeames’s fine painting “And When Did You Last See Your Father?” I can’t recall any significant works of fiction about our Civil War, but Cavaliers and Roundheads were stock characters in the illustrated comics we all read, which often had excellent picture stories continued over several months. We knew from Sellar and Yeatman that the King’s men were Wrong but Wromantic, while Parliament’s were Right but Repulsive.

America’s Civil War was much more vague and distant to us. We knew it had been fought between North and South and had something to do with slavery, but that was about it. Louisa May Alcott’s Little Women was on the canon of classic children’s books, but of course no red-blooded boy would be seen dead with it. I did read Stephen Crane’s The Red Badge of Courage in the Classics Illustrated edition but retained very little of it”mainly, what peculiar caps the Union soldiers wore, with that flat, slanted-forward top.

(Our ignorance is excusable, given the distance in time and space. Emily Dickinson lived through the whole thing in Massachusetts yet seems, to judge from her verses, not to have noticed the war.)

So along came the Civil War’s 150th anniversary, and here was I, a naturalized US citizen, knowing next to nothing about that tremendous conflict which looms so large in my fellow citizens” minds.

“Friends had warned me that the Civil War is something you get hooked on. They were right: I’m hooked.”

After a year or so of dithering”I am an Olympic-class ditherer and could dither for the American team”I purchased a set of lectures from Great Courses.

There are 48 half-hour lectures in the set, delivered by Prof. Gary Gallagher of the University of Virginia. I’ve been listening to the lectures while I walk my dog in the mornings. One might as well do something constructive with one’s time.

I have taken in the entire course and am now going through it again for points I missed the first time. When I get home from dog-walking, I check with Colin McEvedy’s neat little handbook for battlefield dispositions and points of geography.

This being my only significant acquaintance so far with Civil War scholarship, it would be foolish of me to offer an opinion on Prof. Gallagher’s point of view regarding the war’s many controversies. The most I can say is that he seems judicious, giving a fair shake to all sides.

All sides”that was one of the first things I learned, that there were more than two sides, at least in opinion. Preserve the Union or dissolve it? Preserve it with slavery or without? The radical Republicans (who wanted a Union cleansed of slavery) and the Confederate secessionists actually agreed on a main point: that a Union with slavery”the Union, let it be remembered, defined by the Constitution”was no longer possible. They merely differed on how to escape from the impossibility: by ending slavery or by ending the Union.

Northern Democrats thought that there could be a return to the Constitution’s slaveholding republic, and they pressed their case when Northern morale was low and there was a market for compromise. Given the failure of the many compromises attempted from 1820 on, this doesn’t seem very realistic, but you can understand its appeal to a war-weary public.