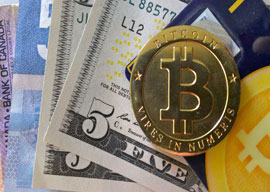 It’s official. The filthy lucre is here to stay. I’m talking about the crypto-currency bitcoin (BTC), the story of whose rise has been a smoking volcano the last two months and which this week is hotter than lava.

What’s going on? Two things. One: the currency value, having been on a tear for the last three months, passed the $500 = 1 BTC threshold on Monday. Then a US Senate hearing the next day declared the currency “legitimate,” at which point investors piled in, sending bitcoin’s value past $900 (£599) in under twenty-four hours. The BTC is fast approaching my price target of $1,000″compared with a price of $200 (£124) in late October of this year.

The BBC flashed the news fast: “The closing down of Silk Road and hearings in front of US government committees,” it reported on November 19, “have led some to believe that prices are increasing as investors think bitcoin will gain more mainstream acceptance.” I received several SMSs from curious friends spreading the news.

Is Washington jerking its thumb at Wall Street? Maybe. The majority of traditional financiers seems to detest this new currency, which is little more than a kind of digital cash: a universal, online-only tender which has no real relationship, so far, to any of the real world’s real currencies.

Why do Wall Street types dislike the virtual currency? For good reason: They are unable to find any good reason for BTC’s quantum leaps of value. In short, some of them still don’t understand what it is (they tend to be the older ones). Other finance types comprehend its raison d’Ãªtre, but they don’t understand how it works. Naturally, the latter makes them uneasy and unwilling to invest. And understanding BTC is no easy task: I’ve been exploring it for six months and I still can’t explain to you exactly how it’s made”or “mined,” to use the correct language.

“The word is that bitcoin is real, it’s legal, and it’s not going away.”

Adding to the confusion, the currency’s origins are obscure. It was first mentioned in a 2008 research paper by a developer who goes by the pseudonym of Satoshi Nakamoto”or “went” by, I should say, as it appears he has since disappeared.

It’s a decentralized currency which uses cryptography to avoid double spending, a problem common to digital currencies. Bitcoin is created, at an ever-decreasing rate, by hacker types who validate every transaction (on private computer networks), entering them into a permanent public ledger known as a digital “blockchain.” The blockchain is a set of cryptogrammic mathematical puzzles. For solving the puzzles”thereby “unlocking the currency””these miners are rewarded in kind (i.e., in bitcoin).

Have I lost you? That’s the point. This is as far as most of us get to comprehending the currency’s architecture. No wonder Wall Street feels out of its depth, despite its one-time appetite for “financial weapons of mass destruction,” complex derivatives, and whatnot. To rub salt into the wound, this small yet increasing number of speculators or daredevils continues to ignore intellectual and educational barriers to comprehending BTC’s dynamics”and they’re buying up the stuff like it’s going out of fashion.

To be sure, this is a fashion, a bubble not unlike previous speculative trends, the Internet bubble of 2000 included. Then again, it’s an elegant technical creation that possesses certain virtues that real currencies do not possess. And now that the US Senate committee has been told that virtual currencies are a legitimate financial-services product carrying the same risks and benefits of other online payment systems, the lights are green and the floodgates may be swept aside.

Bear in mind that this phenomenon is taking place in a world of near-zero interest rates, a world where bonds have lost their value and equities are zooming up…but the 2008 crisis is not erased from our memory. Those who are wary of financial products, even of equities, have traditionally sought a haven in gold and precious metals. Yet the metals have come down from their extraordinary post-2008 heights. Investors don’t know what to do with their money. The real economy is still recovering and it’s an uneasy geopolitical world.

The point is that we don’t know where to go from here as certainly as we did in the past. A flight from bonds to equities has been expected for a while and we have seen financial markets reaching record highs once again. Then again, many investors remain scared or at least untrusting of the capital markets. It’s not like it used to be: not when you’ve lost, or you’ve seen people lose, their shirts, their cars, their houses.

Banks remain unpopular”see their overlong depressed and ridiculously undervalued stock prices”and savings accounts offer little more than a $100 signing bonus. The financial world, which was in breakdown five years ago, is still figuring its new self out. Even Alan Greenspan talks about how disproportionate the output of financial services is in terms of total GDP.

It’s maybe no accident that bitcoin came along right now, when ordinary consumers are sick of banks and bank charges and bank bailouts and bank penalties and….

Against this backdrop, BTC comes into its own as a superbly cheap way to transfer money, to hold money, to perform everyday financial transactions…and without the threat of ruin, such as that supposedly and anecdotally created by the banks prior to 2008. BTC is a safe haven of a different kind. In fact, its price gyrations make it wildly unsafe. Yet more and more people use it. Soon millions of transactions per day will be conducted in BTC, and while some people may buy it hoping to get rich quick, others find it still a good deal, at various price points up and down, for the purposes of conducting their financial lives. It comes down to whether you’re a teenager in Tokyo or a father of four in Connecticut.