Biting the Hand That Holds Out the Olive Branch 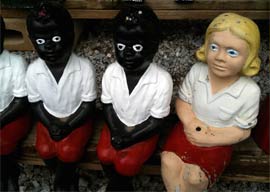 I’ve noticed a trend: The more that white people apologize, the more they get mocked. The more they concede, the more that is demanded of them. The more frequently they make gestures of goodwill, the more they get emotionally sandblasted with malicious rhetoric about how “whiteness” is a poison that needs to be uprooted and eradicated. And what’s bitterly funny is that these well-meaning but fatally clueless Caucasoids can’t seem to figure out why this is happening.

The reason is simple: Self-hatred is never attractive, neither individually nor collectively, no matter who’s expressing it. It didn’t reflect well on blacks when movie clowns such as Mantan Moreland was bugging his eyes out and saying “Feets don’t fail me now!,” nor was it appealing when the heavy-lidded Stepin Fetchit played a shuffling, servile black idiot in every appearance.

Yet the default Virtue Mode these days for any white person who doesn’t want to be forever banished beyond the Pale”or should that be into the Pale?”is to bend over, grab their ankles, wince, and scream, “Pleeze, Massa, don’t hurt me!” They are sheltered and stupid enough to see such behavior as a virtue rather than a weakness. They appear to view it as a survival strategy rather than an invitation to murder.

The groups they’re trying to appease, though, aren’t nearly so naÃ¯ve. Since people are animals”especially ones who’ve been encouraged their entire lives to view you as a natural predator who’s constantly seeking to kill, maim, defame, and oppress you”they tend to smell blood with every escalating gesture of compassion. It emboldens them to bite the hand that meekly holds out the olive branch.

Of course the clueless white ethnomasochists wind up getting hurt. It’s as if they’ve willingly allowed a giant KICK ME sign to be painted on their backs.

As was seamlessly documented in Howard Bloom’s The Lucifer Principle, most kings throughout history were overthrown not at the height of their despotism, but after they’d grown soft and started trying to make amends.

They say white people deserve to hate themselves for all the pain and death they’ve wrought. I say white people are loathsome these days because they’re uniquely susceptible to such idiotic guilt-tripping. That’s the problem with white people”not that it was so easy for them to conquer the world, but that it’s so easy to make them feel bad about it.

I sure as hell hate white people these days”they are by far my least favorite racial group”but not because they’re innately worth hating. It’s because they already hate themselves far too much, and they don’t wear it well. I have far more respect for all other groups because they respect themselves, whether it’s deserved or not.

It’s been a long process, but huge swaths of the globe’s Caucasian population have been snookered and hoodwinked and bamboozled into thinking that being history’s winners should be a matter of shame rather than celebration. You don’t see such servile self-abnegation among any other racial group on Earth. Has there been a demographic cluster in world history more thoroughly brainwashed into cheering its own demise than modern white people?

As our culture is currently dictated to us, white ethnomasochism is the only form of ethnic self-hatred that is currently deemed a virtue. Nonwhites are ritually scolded if they aren’t openly proud of their heritage, whereas whites are publicly reprimanded if they dare to notice anything in white history beyond slavery, colonialism, and the Holocaust.

Look with disgust upon these squirming white worms with their endlessly tacky public displays of self-flagellation, exulting in the idea of their own wickedness, trying to drown their historical sins in a cleansing wave of softly genocidal immigration. Afflicted with a perverse sort of racial body dysmorphia, they would crawl out of their white skin if they could only find a way.

This is the sort of thing that happens in the late stages of a crumbling empire, when the fat, lazy, and pampered have grown so soft they’ve blinded themselves to the wolf pack waiting at the door that’s eager to tear them to pieces.

Believe this”if white people actually held such iron-fisted power and were remotely as ruthless as they are portrayed, there would be no such mocking. People would be scared beyond belief to insult whites, because they’d be forced to deal with drastic consequences”you know, just as any white person these days is publicly destroyed for saying anything remotely unkind about nonwhites.

We are constantly lectured that there was nothing good about the “good old days,” that it was one giant charnel house of rape and plunder and exploitation.