Black BART and the Freedom Riders 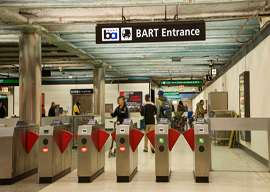 It’s been a good month for Mark Weber. Mark is the director of the California-based Institute for Historical Review (IHR), a publishing house that dares to sell books that express points of view that some people consider bad. The nerve! I try to stick up for the IHR any chance I get. Mark’s been a close friend of mine for nearly three decades (plus, he’s the finest historian I know), and the IHR was my very first publisher, in 1991 (you remember 1991, right? That’s back when Supreme Court confirmation hearings weren’t hijacked by leftist female academics with unprovable allegations and…oh, wait).

But the main reason I stick up for the IHR is the same reason I’d stick up for a black-power bookstore (like the one that blacks themselves burned to the ground during the L.A. riots. Those wacky blacks!). I’m kind of a fanatic on that First Amendment thing, and nothing screams First Amendment like the right to publish. Yes, the IHR sells certain books that showcase opinions with which I disagree, and that’s rather the point of my defense. You defend the speech you don’t like. You don’t have to defend the content, but if you don’t defend the basic right of that content to compete in the marketplace of ideas, you can’t call yourself pro–free speech (anyone who has ever started a sentence with “I believe in free speech but…” does not actually believe in free speech).

Weber and I recently had a bit of fun with the Bay Area Rapid Transit (BART). That’s the subway and light rail system connecting San Francisco to Oakland and other nearby areas. Now, the problem with running a service in which the core customer base comprises homeless people searching for new sidewalks on which to shit and Oakland thugs looking to do hit-and-run muggings in better parts of town is that you get a lot of fare evasions. So, BART has been trying to find new ways to generate revenue, especially as Governor Brown has redirected so much public transportation money to his beloved pet project of mass dirigible service (zero carbon footprint, clean-burning hydrogen, and only 20% passenger immolation).

Recently, BART started imposing fines on fare evaders. Big mistake. Sure, BART loses around $20 million a year due to unticketed riders, and perhaps when BART launched its “show your ticket” campaign in March 2018, administrators expected that the majority of evaders would be blond-haired Swedes jumping turnstiles while shouting, “Hurdy gurdy bordy furdy, ya can’t catch me!” Unfortunately, as of now, the number of Muppet chefs caught riding ticketless stands at zero. The number of black folks? Forty percent of tickets issued for fare evasion have gone to, how should I put it, “future Swedes” (i.e., people of color).

“Public agencies are no longer center stage in the free-speech struggle. It’s all about private entities now.”

Well, there’s no way the San Francisco media, and the Democrats who control the city’s poo-caked sidewalks, could stand for that. BART was slammed again and again for its racist “show your ticket” policy…a policy so oppressive, it requires people who board a train for which purchasing a ticket is mandatory to show the ticket that the law demands they purchase (could Himmler himself have thought of anything more diabolical?). When BART conducted an extensive study that conclusively demonstrated that ticket inspectors were asking everyone boarding the trains to show their tickets regardless of race, leftists responded by saying, “It doesn’t matter that the policy is color-blind and enforced without bias. Blacks suffer merely for being asked to show their tickets…because slavery! Have we forgotten about the vast Marin County cotton fields and the slaves who died harvesting them? And what about that time Dirty Harry killed those blacks in that coffee shop? ‘Show your ticket’ inflicts severe psychological harm on oppressed Bay Area blacks!” According to local TV news station KRON, BART’s data showing color-blind enforcement hides the terror that black riders feel when asked to show their tickets. KRON quoted a black BART rider who said of the anti-evasion policy, “I am not okay with it. I am not comfortable with it.” But, he added, “I am coping with it.”

Damn, give that guy a Presidential Medal of Freedom. Has anyone ever had to endure worse racism than having to show the subway ticket they were required by law to purchase? This hero makes the four little girls killed in the 16th Street Church bombing in 1963 look like whiny, privileged brats.

With its fare evasion policy under attack, BART has been seeking revenue elsewhere. And one of those elsewheres involves video advertisements in BART stations. High-tech, flashy electronic billboards, where companies can purchase ads that run all day on a loop. And that paid-ad policy was working just fine, bombarding riders with promos for Black Panther, Cardi B’s greatest hits, and the new Slappy White biography.

Until Mark Weber decided to get in on the fun.

BART is a public agency; it cannot exercise partisan political or ideological viewpoint discrimination. So why not submit an ad? Which Mark did…and it was promptly rejected. Why? All the ad said was “History Matters.” Under those words were the IHR’s logo and URL. But, even though an agency like BART cannot engage in viewpoint discrimination, it can have other policies that regulate the content of ads. In this case, BART told Weber that his ad violated BART’s policy against “material that demeans or disparages an individual or group of individuals” and “material that ridicules or mocks, is abusive or hostile to, or debases the dignity or stature of, an individual or group of individuals.”

BART is allowed such a policy, as long as it’s enforced in a color-blind manner, much like the “show your ticket” thing. The IHR’s attorney asked BART to point out the part of the ad that violated the “four Ds” (thou shalt not demean, disparage, and debase dignity). BART responded that the ad itself was fine, but a particular book on the IHR’s website was totally evil. Mark told BART that if it identified the offending book, he would take it off the site for the duration of the ad’s run, to be (cue Steve Buscemi voice) “in full compliance.” And that’s when BART decided to get cute. BART’s assistant general manager told the IHR’s attorney that “It is beyond the District’s purview to dictate which items can or cannot be sold at ihr.org or on any other third-party website. Therefore, the District is unable to satisfy your request.”

Get it? So clever! “Our policy prevents your ad from running because of one book on your website, but our policy also prevents us from telling you which book is the one we object to.” I’m sure the BART assistant manager gave herself a round of feminist jazz-hands for cooking up that one.

Mark consulted with me, his unofficial consigliere (or I suppose kikesigliere in my case). We decided to call BART’s bluff. We removed the URL from the ad. With no link to the site, the evil book became irrelevant (and even without the URL, curious riders need only Google the IHR to reach the site).

BART had to give in. And it did. The ad ran, and the inevitable media storm followed, led by a piece in The Guardian by San Francisco-based reporter Sam Levin (another Swede, I’m assuming). In the piece, Levin puts scare quotes around the right to “free speech” (dude, you don’t use scare quotes when something is an undisputed fact. This right exists), and he turns much of the article over to the SPLC, which he stresses is a nonprofit organization, while ignoring the fact that the IHR is one too. Levin also quotes a BART spokesbeing who whines that they didn’t want to run the ad, but because of that damn pesky Constitution, they had to.

And that’s the downside to this one small victory for free speech. We could outmaneuver BART because it’s bound by the First Amendment. But public agencies are no longer center stage in the free-speech struggle. It’s all about private entities now—content-delivery networks, web hosts, and, of course, social media. These companies aren’t bound by First Amendment law the way a government agency is. For example, last week Vice triumphantly reported that, due to its intrepid “journalism” (that’s where the scare quotes go, Mr. Levin), Facebook is reevaluating its policy of not banning white nationalism and separatism. Previously, Facebook had told Vice that “banning all nationalist or separatists movements could negatively impact people around the world—pointing to black separatist groups and the Basque movement.” But now, thanks to Vice, Facebook is considering dispensing with that “fairness” jive and banning only white nationalism and separatism, while still allowing identical views from people who aren’t cursed with that ofay devil alabaster skin.

A government agency couldn’t do that. It would be a clear case of racial discrimination.

A year ago in this column I asked a legal scholar with the Electronic Frontier Foundation if an antidiscrimination lawsuit could be launched against online entities that ban white extremism but not black or Muslim extremism. “I think that would be an interesting case to try,” he replied. But who has the guts to try it? Any lawyer or law firm initiating such a case would be harassed on social media and probably attacked by Antifa goons in real life.

Just a few days ago, the ACLU lodged a legal complaint against Facebook because companies can target paid Facebook ads to one particular gender (an ad can’t say “men only,” but in choosing an audience, one can stipulate which gender sees the ad). The ACLU certainly seems willing to move ahead on a leftist version of the idea I floated last year, because the ACLU knows it won’t be pummeled figuratively in the press and literally by Antifa. The ACLU has declared that it’s discriminatory to boost an ad based on gender. But do you think for a moment that these fine guardians of our liberties (hey—they defended the right of Nazis to march in Skokie in 1977…Christ, I haven’t seen anyone get so much mileage out of a one-hit wonder since Bobby Pickett) will agree that banning Facebook content based on race is also discriminatory?

Of course they won’t. The left creams over the fact that the most essential forums for speech these days are not chained to that dumb ol’ Constitution (and to think…leftists used to despise privatization. C’mon, libertarians; here’s your entryway to a whole new audience!). And until a legal advocacy group that actually cares about free speech (ACLU, that counts you out) decides to take online speech discrimination seriously, things are only going to get worse.

In the meantime, it’s nice to bask in the small victories. The IHR’s BART ad runs until the end of this month. And while it may not change the landscape, it’s certainly raised the blood pressure of social justice leftists.

To quote the great philosopher Martin Gore, “Thank the Lord for small mercies.”