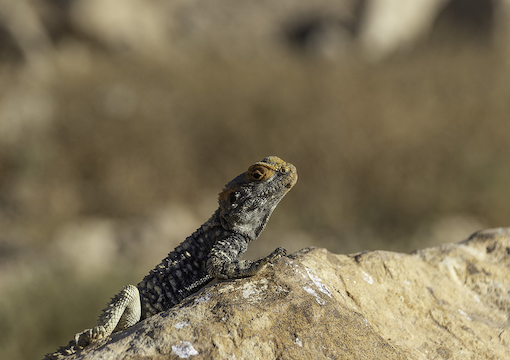 A few weeks ago, I saw my first lizard of spring—except, of course, that it was still January, which is to say winter. The weather, however, was unseasonably warm, and I suppose nowadays many people might have considered this a harbinger of the end of the world, but which I was selfish enough to find rather pleasant. (Not that contemplation of the end of the world is without its pleasures, a truth to which many disaster films attest.) At any rate, it allowed me to sit out for a while in the sun before the final collapse of the ecosphere.

Certainly, lizards, which are what are known as ectotherms, deriving their heat directly from the environment, will benefit from global warming. Perhaps, even, the dinosaurs will return, the warm-blooded mammals not having been so agile and clever after all, and quite without the intervention of either Michael Crichton or Professor Challenger. (I once saw a film in which it was predicted that it would be the insects, rather than the meek, who would inherit the earth, once Mankind had eliminated itself with nuclear weapons; but that was the nuclear winter before global warming.)

However, something very strange has happened to many of the lizards on my terrace in France: They have turned black, which a high proportion of them now are. At first I thought I must be imagining it, but further observation established the point quite clearly.

Why had they done so? Every English schoolboy used to know the story of the moth that went from being predominantly white to predominantly mottled gray and black because of the industrial revolution, the soot of that revolution settling on the moth’s natural habitat and making blackness an advantage in the struggle for survival. A white moth on a dark background made it an easy target for predators, and so a mutation responsible for darkening it would assist survival. Eventually, then, the darker moths would—and did—prevail numerically. Here was natural selection in action, but of course it was far too soon for the darkened moth to turn into another species entirely.

“Something very strange has happened to many of the lizards on my terrace in France.”

But why the dark lizards? I am glad to report that there is no soot in our area, though long ago there were coal mines at a comparatively short distance—now, of course, all closed down. No, the walls of the house and the stones of the terrace have not darkened recently, certainly not in the two years in which the black lizards have become first noticeable and then predominant.

An invading species displacing the usual one? I am not lizard taxonomist enough to exclude this possibility, but I think it unlikely. More likely it was a mutant strain that conferred some advantage on the black lizards: But what could that advantage be?

I could see a potential disadvantage: The blackness actually made the lizards more conspicuous than their lighter, more mottled brown, gray, and green (or greenish) competitors, and therefore easier to prey upon. Small lizards have a large number of predators, but the fact that the black variety became so quickly predominant meant that that hardly mattered, or at least was counterbalanced by an advantage that outweighed the disadvantage. And in fact, in many years of sitting out on the terrace or watching from afar I have never seen a lizard preyed upon, though it might be that my very presence discouraged predators.

It occurred to me that perhaps the black lizards were sexually more active or fertile, or more attractive to females, than the usual kind, and certainly they seemed (this was my impression only) to be larger and more active than what I might call the traditional variety.

That was as far as I got in my meandering biological reflections, but in a moment of inspiration, I turned to my mobile telephone. Though we are very isolated, it brings the world to our door—not unequivocally a good thing, of course, given the state of the world and the fact that what the eye doesn’t see, the heart can’t grieve over. But it has its uses and pleasures.

I typed in Melanosis in lizards and up popped several scientific papers, for example that by Débora Lina Moreno Azócar, of the Laboratory of Ecology, Evolutionary Biology and Behaviour of Reptilians, of Bariloche, Argentina, et al., titled “How and when melanic coloration is an advantage for lizards: the case of three closely-related species of Liolaemus.”

One theory of melanosis in lizards—how stupid of me not to have thought of it, I thought, just as Thomas Huxley is said to have said when he first read The Origin of Species—is that, in essence, it allows lizards to warm up more quickly and become more active, especially in cold climates, or at least in climates in which it is sometimes cold. The authors of the paper conducted tests of speed in melanotic and non-melanotic lizards, and their body temperatures, with results that favored the melanotic lizards. Why, then, do not all or most lizards in such areas become melanotic? Presumably because increased predation counterbalances the advantages, not all locations being as free of predators as the terrace of my house (though I once found a sloughed-off snake skin there, and there being no honor between reptiles, snakes are predators on small lizards).

I thought of an experiment that might further the theory of melanosis in small lizards. Although it warms up in the day now, it is still cold at night. If the theory is correct, then, the black lizards should emerge earlier in the morning than the others, for they would absorb the early warmth better, and their numerical prevalence should be higher in the morning than at midday when the sun is fully up and all the other lizards have warmed up.

Alas, I have to leave my house, so cannot carry out my little experiment—or rather, observation. But I found the whole question of black lizards both fascinating and heartening: the latter because it was so easy to obtain information about it, even in our isolation, and second because there were biologists investigating the matter seriously, impelled, I presume, by the most disinterested curiosity, and far from the passions that move most people:

The world is too much with us; late and soon
Getting and spending we lay waste our powers:
Little we see in Nature that is ours;
We have given our hearts away, a sordid boon!