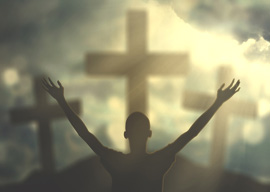 Former Washington Post columnist Colman McCarthy is literally Mr. Peace. He founded the Washington Peace Center in D.C., and he’s taught classes on peace and nonviolence at Georgetown University, American University, and the University of Maryland. After 9/11, he wrote an op-ed for the L.A. Times in which he outlined the proper U.S. response to the unprecedented act of Islamic terror:

The nonviolent response to Sept. 11 is in the tradition of Gandhi, Martin Luther King Jr., Dorothy Day, Jeannette Rankin and groups like the Fellowship of Reconciliation and Pax Christi. It is saying to those behind the attack: We forgive you; we reject vengeance. And then, summoning still more moral courage, to ask them to forgive us for all of our violence…

What a saint! Except the thing about McCarthy is, it seems like he only takes that “forgive your attackers and ask them to forgive you” line when the attackers are nonwhite or non-Christian. Last week, I emailed McCarthy and his underlings at the Peace Center with a simple question about the recent violence in Charlottesville. Should the parents of Heather Heyer forgive her attacker? Wouldn’t that be the “morally courageous” thing to do? If McCarthy thinks the parents of slain WTC firefighters should say to the 9/11 terrorists, “We forgive you, oh noble Arab Muslims, now please forgive us,” shouldn’t Heather Heyer’s parents forgive and ask forgiveness from the fashy-boy who steamrolled their daughter?

I didn’t receive a reply from McCarthy and his disciples. Big surprise. That whole “forgive and ask for forgiveness” thing is reserved for whites who are attacked by “people of color.” I call it Amy Biehl syndrome. You remember her, right? She was the blond shiksa who traveled to Africa to help the poor downtrodden blacks, only to be severely trodden-down by the blacks she was trying to help, as a mob of enraged POCs (pummelers of color) pulled her from her car and stomped, stoned, and stabbed her to death merely for being white. Biehl’s family forgave the four men convicted of her murder and advocated for them to be pardoned and released. Her father shook the killers’ hands when they were freed. He linked arms with the men who butchered his daughter and launched a foundation through which the forgiven murderers were assured a steady paycheck.

“No one should fear being right because of the skin color of the person who is wrong.”

Have any black victims of white hate crimes ever gone the Biehl route? It almost happened once, but the forgiveness was shut down immediately by (get ready for the irony) a black Christian minister and the civil rights organization he represents. In 2015, at the bond hearing for Little Dutch Boy mass murderer Dylann Roof, the daughter of one of the victims told the accused, “You took something very precious from me…. But I forgive you. And have mercy on your soul.” That was a truly admirable thing to say, but the NAACP would have none of it. Following the hearing, North Carolina NAACP schizo-in-chief Rev. Curtis Gatewood (regular readers might remember this nutcase from a previous column) announced that blacks must never forgive whites like Roof. The loose-screwed, paranoid reverend went on a lengthy and bizarre videotaped rant, castigating the victims’ families for even entertaining the notion of forgiveness. He counseled the families not to forgive but rather to stay “angry.” Did I mention this clown is a Christian minister?

It’s a sad, simple truth of our times. Whites are expected to forgive and ask for forgiveness, while blacks are expected to stay angry. Which brings me to Winston Moseley. Moseley is the African-American gentleman who rather famously raped and murdered Kitty Genovese in Queens in 1964 while “38 witnesses” in her apartment building looked on and did nothing. As Kathy Shaidle pointed out last year, the “38 witnesses” story is complete bunk, an invention of The New York Times. But the actual details of Genovese’s encounter with Moseley are damn near too horrific to imagine. Winston Moseley was no ordinary monster; he had a fetish for stabbing or shooting women and then raping them as they died. Not after they died, but as they died. I don’t think that’s necrophilia per se, but I’m not going to waste time Googling “name of fetish for raping a dying woman.” Moseley was “life unworthy of life.” His first victim was shot, raped, and then burned alive because she was still breathing after he climaxed. His next victim was just 15 years old. And then there was Ms. Genovese, who endured an agonizing 35 minutes of sexual assault before finally bleeding out. Moseley, initially sentenced to death but given a life-with-the-possibility-of-parole reprieve because New York liberals believe in forgiving black erotophonophiles (okay, I fucking Googled it), escaped from prison in 1968 and raped yet another random woman. He died in prison last year at the ripe old age of 81. Whatever the cause, it couldn’t possibly have been as painful as the death he deserved.

Also last year, a documentary about the Genovese murder was released, titled The Witness. The film focuses on Kitty’s brother Bill, a Vietnam vet who lost his legs in the war, as he tries to uncover the truth behind the “38 witnesses” myth. A couple of friends recommended the film to me because I wrote about the Genovese case in a previous column, but I just couldn’t bring myself to watch it, because, from the promos I saw, it seemed as though the movie ends with Bill Genovese forgiving Moseley for his sister’s torture-murder. And frankly, seeing that sadistic, unrepentant freak receive forgiveness would have raised my blood pressure from slightly elevated to Kirk Douglas-level incipient-stroke territory.

Last week, I finally saw the film. The good news is that Bill Genovese doesn’t end up forgiving Winston Moseley. The bad news is, he interviews Moseley’s son Steven, who, like the NAACP’s Gatewood, is another supposed “reverend,” and what we see in the four-minute Moseley/Genovese exchange is a condensation of everything that is unhealthy, everything that is wrong, with black America today.

Genovese starts things off on a conciliatory note:

Genovese: I don’t hold the son responsible for the father’s deeds. Your dad wouldn’t talk to me, and I’m trying to find a way in my own heart to forgive him.

Moseley: Can I explain to you what forgiveness does? When you forgive people, it’s for yourself. It’s for you.

So far so good. Christian forgiveness and such.

Moseley: How would you feel about him getting paroled? Because, um, if it had not been for the, uh, notoriety of this story, he’d have probably been paroled by now.

Really? You have a chance to speak to the brother of one of the women your father raped, tortured, and murdered…and you not only suggest that he should be paroled, but you blame the “notoriety” of the crime, rather than the crime itself, for the fact that he hasn’t been?

Genovese: Fifty years ago, but my concern is, where is he now?

Moseley: Only thing I know is from what he told me, you know? He said he just snapped out. ’Cause there was some racial tension going on back then. And your sister was using a lot of racial slurs at him and he just lost it. That’s what he told me.