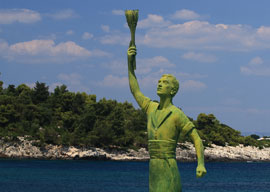 I am about to leave for karate camp in Thun, Switzerland: four days of double sessions lasting one hour and forty-five minutes each, with three hundred black belts from all over Europe and North America attending. I’ll give you all the details next week once I’m safely back home and on my way to the Greek islands. I know, I know—it’s a tough life, but I deserve it. After all, as a self-made man it is right and proper for me to enjoy my golden years in comfort. (And if you believe that, you probably deem rap an art.)

Unlike the British foreign minister, I am not about to apologize for calling some Greek woman writing out of London for the world’s most boring newspaper stupid. It is a bit unfair; the International Herald Tribune is a better read than Double Glazing News, but life is, after all, unfair—but please, Oh Lord, protect me from female Greek lefties seething with revolutionary fervor and banging on about inequities in the home of feta cheese and olive oil. The stupid one raged against the closing of the state broadcaster, ERT, as lefty as the BBC but ten times as bloated and patronage-ridden.

“What Greece needed back in the 1940s was less communism and more electrolysis.”

The ERT embodied where Greece went wrong: lifetime jobs for people who hadn’t bothered to show up for years, pensions ditto, and other such outrages handed out by successive governments in return for votes. The two parties now in power were the ones that nurtured the rotten system, but Greeks forget easily and then tend to go to the beach. When I speak with my countrymen and women, they all complain about the EU’s harsh terms for bailing out the country. But when I tell them Greece should never have gotten into the macabre business in the first place and should have left the euro the moment the gun was pointed at our temple, they say no, we belong in Europe and the euro is our only hope. It is a typical Greek reaction.

Well, I haven’t lived in Greece in seventy some odd years except for long visits, so I tend to see things differently. What Greece needed back in the 1940s was less communism and more electrolysis. What she needs now is less EU and more private enterprise. The public sector is what sank the Greek economy. That, and corruption by the two main parties, the same two parties now putting the squeeze on poor people to satisfy the EU crooks. But the voices one hears whining about the loss of jobs are the voices of those who played a big part in sinking the country, those of civil servants crying over the loss of their sinecures. (Like that stupid woman writing in the IHT and warning against a fascist takeover of Greece; no such luck, I’m afraid.)