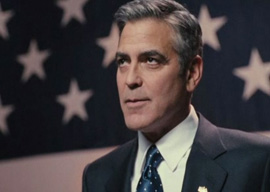 George Clooney likes to make serious, important movies such as Up in the Air, Michael Clayton, and The American, in which he plays broken men beaten down by The System. Fortunately, it seems to have finally dawned on Clooney that he exudes too much Clooneyosity to be plausible as a small-time loser. Thus, in his fourth directorial effort, The Ides of March, he has cast himself—quite credibly—as the frontrunner for the Democratic presidential nomination. (In real life, Clooney has ruled out politics: “Run for office? No. I’ve slept with too many women, I’ve done too many drugs, and I’ve been to too many parties.”) He’s excellent, as are Philip Seymour Hoffman and Paul Giamatti as the pudgy dueling campaign managers.

Clooney and his old acting buddy Grant Heslov adapted the stagy screenplay from Beau Willimon’s 2008 play Farragut North. Willimon had staffed four Democratic campaigns but found himself unemployed shortly after Howard Dean’s “I Have a Scream” speech at the 2004 Iowa caucuses. (By the way, would Governor Dean really have lost to President Bush by more than Senator Lurch (D-Addams Family) managed?)

“I finally figured out that ‘North Carolinian’ is Clooney-code for ‘black.’”

The movie version’s exciting TV commercials and titular reference to Julius Caesar’s assassination make The Ides of March appear to be a conspiracy thriller. I used to roll my eyes at political conspiracy movies, but after what happened to Dominique Strauss-Kahn, Julian Assange, and Eliot Spitzer, I’m in the mood for intrigue.

Instead, The Ides of March is a morality melodrama, classy fare for NPR fans. Clooney’s governor of Pennsylvania is locked in a tight Ohio primary with the last rival standing in the Democratic field. Will Clooney compromise his principles and strike what Andrew Jackson’s supporters in 1824 denounced as the “corrupt bargain” between John Quincy Adams and Henry Clay? In return for an endorsement, will he offer the Secretary of State post to the primaries’ third-place finisher, a North Carolina Senator played by Jeffrey Wright?