Black Clouds Over the Rainbow 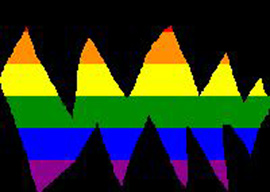 In 2008, it was California’s black voters who voted 70% in favor of anti-gay-marriage Proposition 8, providing the edge to victory. As recently as 2016, black Americans still opposed gay marriage by a fifteen-point margin compared to whites.

I remember reading that on Election Night in 2008, frantic gaylords were mincing hysterically through the streets of West Hollywood, cursing “niggers” at the top of their lungs. A month later at a marriage equality rally in LA, a black man named Geoffrey remembers being screamed at by white turd-burglars:

It was like being at a Klan rally except the Klansmen were wearing Abercrombie polos and Birkenstocks. YOU NIGGER, one man shouted at men. If your people want to call me a FAGGOT, I will call you a nigger.

Supposedly there’s tons of “racism in the LGBT community.” There are Jew-hating lesbians who blame Judaism for creating patriarchy and who resent the Jew God for destroying Sodom and Gomorrah. Twenty-six percent of gay Parisians supported Marine Le Pen, compared to only 16 percent of straights. (I thought all Parisians were gay.) Harmful stereotypes about well-hung and aggressive black males and effeminate and poorly endowed Asian males persist throughout the gay community, despite the fact that scientific evidence about penis size and testosterone levels tend to legitimize such hateful ideas. To combat such noxious bigotry, there are racial identity groups for not only gay Hispanics, blacks, and Asians, but also for gay aborigines, Injuns, and gypsies. Yet, there are currently few, if any, gay advocacy groups for whites except on the cattier fringes of the Alt-Right.

In an attempt to make peace with nonwhite Sons of Sodom, the City of Brotherly Love recently unveiled a new rainbow flag that added brown and black stripes. Some outraged white poofs insisted that they also add a white stripe, but let’s face it”with the addition of the black and brown stripes, white gays are basically waving a white flag, anyway. They”re also lying down prostrate and begging, “please don”t hit me” every time that blacks, gay or not, show up and start yelling at them.

Will the “black community” and white gays finally make their peace? Lord, I hope not. Ever since Cultural Marxism destroyed comedy, these sorts of intersectional catfights are the funniest things in the world.