Black Emperors of the North Pole 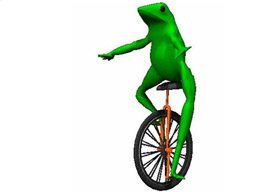 Emperor of the North, the classic 1973 film directed by Robert Aldrich, details the dysfunctional relationship between train-hopping hobos and the railroad men who kill them. It’s the kind of totally unique “70s film that could not get made today, a film in which the male leads are masculine, violent, and ass-ugly, and there’s not a skirt in sight. Lee Marvin plays the Depression-era hobo who squares off against sadistic conductor Ernest Borgnine. Most viewers assume that the “North” in the title comes from the fact that the film is set in the Pacific Northwest, but that isn”t the case. The film was originally called Emperor of the North Pole, but the studio feared that audiences might think the film dealt with Christmas or Santa Claus. So “Pole” was dropped, much to Marvin’s chagrin, because he knew the significance of the original title.

It was a common joke among hobos in the 1930s that to be crowned “king of the hobos” was, in effect, to be emperor of the North Pole”in other words, the king of nothing. Ruler of a wasteland, with subjects of no significance. Last week, I was reminded of those hobo kings by an outwardly insignificant little episode involving, of all things, a frog on a unicycle.

“Dat Boi” is an Internet meme that sprung up randomly, as so many memes do, about two months ago. It’s a low-resolution frog riding a unicycle, with the caption “Here come dat boi!” Don”t try to overthink it. It’s (supposedly) funny because it’s silly and random. A frog, retro low-res graphics, a unicycle, and slang for “that boy.” If you insist on knowing more, there’s no shortage of Dat Boi explanatory articles. But really, all you need to know is that it’s arbitrary on purpose, a non sequitur, a head-scratcher for “noobs”…everything that makes a good meme.

Except that according to black social justice warriors, it’s a bad meme. A very bad meme. Because it’s racist (you expected a different reason?). Yes, the frog on the unicycle is racist. According to a May 25 piece in PAPER magazine, proud African-American warriors have decided that Dat Boi is yet another case of “cultural appropriation,” as well as “white privilege and the Internet’s casual appropriation of African-American Vernacular English (AAVE).” Over the course of three days, the influential, 40,000-person meme-appreciation Facebook group Post Aesthetics experienced a mutiny of sorts as black members demanded that posts featuring Dat Boi be censored, and that Dat Boi be banned from ever showing its froggy face again. The moderators agreed, and the frog on the unicycle was banished, along with many group members whose racism was so severe that they were blinded to the obvious fact that the unicycle frog was a greater menace to black people than a thousand noose-wielding Klansmen.

One anti”Dat Boi group member actually put the time into crafting a six-point itemized list explaining why the meme must be banned. Reason No. 1 was “People who are not black don”t get to decide what is and isn”t antiblack, or what is and isn”t AAVE.” In other words, my opinion is more valid than yours because my skin is different. That’s what passes for “antiracism” these days. Post Aesthetics mod Tamia Thompson explained to PAPER mag that Dat Boi represents “the commodification of black culture on the Internet,” adding, “we try to quell instances of appropriation in the group.” So sayonara, Dat Boi (wait…did I just culturally appropriate from Asians?).

Black social justice warriors won the battle. But what did they win? A fucking frog on a fucking unicycle. They got a meme banned from a meme appreciation group. Big victory. Get some plastic crowns, we have new emperors of the North Pole. As SJWs continue to micromanage every perceived microaggression on the part of whites, we see black person after black person fighting inconsequential battles in the name of combating “cultural appropriation,” celebrating their victories as though they”ve actually accomplished something of value. “I yelled at a white slacker for wearing dreads!” “I got a professor fired for tweeting about Halloween costumes!” “I got a music video banned for shooting in Africa!” “I attacked a fashion designer for using an African pattern!”

For a people who like to boast about being descended from kings, this is most surely an ignominious reduction in influence. “My ancestors ruled over a vast, fertile kingdom and commanded an army of warriors. I got a frog on a unicycle banned from a Facebook group.” From Zulu emperor to hobo emperor. It would be funny if not for the fact that the black community in the U.S. can ill afford such stupidity from its leaders and activists. Stoners wearing dreadlocks and frogs on unicycles…these are the worst problems black Americans face?

As a Jew, this whole cultural appropriation thing befuddles me. When I see black people getting so anal-retentive over whites “usurping” their culture, I want to scream from the top of my Hebraic lungs, “You morons”you”re doing it wrong!” Jews are where we are in the West because we invite cultural appropriation. Hell, we insist on it. We want the host culture to use our words and phrases, adapt our influences, adopt our faith, flock to our causes, and believe that our suffering is theirs. We want you to co-opt our culture. When we see Christians quoting from the Old Testament more often than the New, we don”t think, “Hey, stop appropriating our faith,” but just the opposite”we love it when white European Christians claim a chunk of Hebrew history for themselves. We look at it as a safety net, for us.

In the same way, we want Christians to appropriate Israel. We want them to think that Israel’s existence and security are actually important Christian matters (you know, “prophecy” and such). When we see Christians championing Israel as though it’s their homeland, too, we don”t think, “Damn that dreaded appropriation of our blessed land.” We think, “Bravo”this is supremely good for our security.”

Note how Jews aren”t upset that y”all get your sons” penises clipped. It’s supposed to be something holy, a covenant between us and our God. Hey, black folks, circumcision is a lot holier to us than your filthy dreads are to you. But guess what? We absolutely love the fact that Christian whites embrace the practice, because now it’s a covenant between us and the dominant culture.

Jews embrace the fact that Yiddish has subtly infiltrated the English language. We don”t get pissed when we hear a gentile say klutz or shtick or schmuck or schmooze, or adopt Yiddish phraseology like “such a deal” or “you think maybe?” We don”t view it as linguistic genocide. And speaking of genocide…

As for the Holocaust”the thing that is more important to American Jews than God Himself (sadly, that’s not hyperbole)”we have done everything we can to give goys a stake in Holocaust suffering. You know that “five million non-Jews killed in the Holocaust” thing? Entirely fabricated, invented, concocted…fantasized for our protection. As Holocaust maven Deborah Lipstadt wrote in the Jewish Review of Books (winter 2011):

In the 1970s, [Simon] Wiesenthal began to refer to “eleven million victims” of the Holocaust, six million Jews and five million non-Jews, but the latter number had no basis in historical reality…. Nevertheless, Wiesenthal’s contrived death toll, with its neat almost-symmetry, has become a widely accepted “fact.” When Israeli historians Yehuda Bauer and Yisrael Gutman challenged Wiesenthal on this point, he admitted that he had invented the figure of eleven million victims in order to stimulate interest in the Holocaust among non-Jews. He chose five million because it was almost, but not quite, as large as six million.