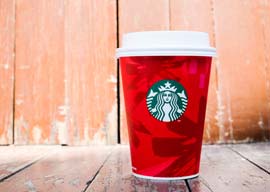 I”m generalizing, of course. Yes, I realize you have a black friend who drinks a lot of coffee. You”ve even seen him drink coffee with your own eyes”many times. But I”m talking about trends here. And the trend is that relative to their Caucasian oppressors, black people don”t drink as much coffee as white people do. According to this super-special government document, white American adults drink about three times as much coffee as blacks.

Why the disparity? Why the persistent and seemingly ineradicable coffee inequality? If one were so inclined, one could fairly describe American blacks as “coffee-deprived.” They”re a “coffee-underserved population.” You might even allege that urban blacks live in “coffee deserts.”

Since this article is about the intersection of race and coffee, is there truly a whiter brand of coffee than Starbucks? I mean “white” not in the Viking-warrior sense but in the Stuff White People Like sense. Starbucks, that Seattle-born corporate caffeine giant that makes the shittiest coffee in world history and charges credulous customers ten times its value, may employ the occasional dark-skinned so-called “barista””I hate that term”but finding a black customer in a Starbucks is like finding a unicorn at a 7-Eleven.

“Finding a black customer in a Starbucks is like finding a unicorn at a 7-Eleven.”

This is why it’s a sharp pointy pinnacle of irony that Starbucks CEO Howard Schultz”yes, he’s Jewish, because a dozen of you would have mentioned it in the comments anyway”recently launched a publicity blitz encouraging his baristas to engage their customers in an ongoing dialogue about race relations in America.

Right. OK, then, I”ll take a Venti Americano. While you”re preparing my hot beverage, let’s chat about The Bell Curve.

The billionaire Schultz licks his lips a lot while talking, which I”ve always taken to be a sign of severe dishonesty and perhaps even demonic possession. He speaks of how he grew up poor in “federally subsidized” Brooklyn housing and how the people there came in different colors and spoke different languages and worshiped different gods and how that left an impression on him. Now he’s seen the riots in Ferguson and that nice fat black man who couldn”t breathe in New York and is concerned about inequality in America, both the racial kind and the economic kind, and it bothers him, and even after all that Martin Luther King has done, it troubles him to see black people marching at night holding candles and picket signs and shaking their damn heads”again! After all these years, they”re still shaking their damn heads.

His solution? Have his baristas write the term “RaceTogether” on customers” cups in order to initiate what will likely be a deep, meaningful, and bridge-mending conversation rather than a painfully stilted exchange that leads to almost immediate grumbling from the people standing in line behind you.

Even Kareem Abdul-Jabbar thinks Starbucks” race initiative is a supremely stupid idea: “I worry that such forced and awkward conversations could quickly escalate to violence.”

Since you”re an unconscious beneficiary of white privilege and invisible institutional racism, that’s easy for you to say.

OK, how about I beat the fuck out of you right now?