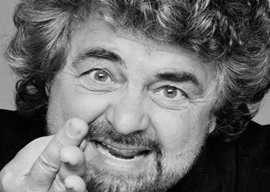 The uomo nuovo in Italian politics is a professional comic called Beppe Grillo, whose slogan is “Vaffanculo!“ (Fuck off!) He’s opposed to everything, it seems, except wind farms. Such are the consequences of the euro crisis, whose cause is simple”too much sovereign debt in countries such as Italy.

Italy’s tragedy is that it has never had a proper conservative party to curtail the state and its excesses, because the nation’s dominant right-wing forces are Catholicism and fascism. Catholics and fascists are both keen on intervention by totalitarian higher bodies such as the state in both life and work, and they are hostile to individual freedom and the free market.

The Italian right has therefore more in common with the international left than it does with the American or British right. As a result, there has been no political force able to stop the Italian state’s long march into every nook and cranny of Italy’s economic and social life.

I see the state’s deadly hand everywhere in the petty day-to-day tyrannies. It is illegal for a shop owner not to close his shop every weekday at lunchtime for three hours. If the police catch you driving with more than twice the alcohol limit in your blood, they seize your automobile and sell it. A cafÃ© can serve food, but only with plastic cutlery because it is not a restaurant. At the end of the evening, a musician who sings in a bar must compile a list of every song he sang and send it to the copyright office.

“Italy’s tragedy is that it has never had a proper conservative party to curtail the state and its excesses, because the nation’s dominant right-wing forces are Catholicism and fascism.”

One of the things that disturbs me most about Italy is the judicial system’s terrifying slowness and incompetence. Professional judges investigate and prosecute crime and have the power to lock a suspect in prison for months without charge while they try to find enough evidence to charge him. Frequently, the suspect is released without charge but with his life ruined. Even if a trial occurs, it takes many years to conclude.

The other day, an old friend and I rediscovered each other after many years and she sent me an email about her recent trip to Italy to see the famous Mille Miglia race which takes place on Italy’s roads each spring. She wrote:

Italy is such a great country, I can understand why you’d never ever want to leave. If you tried to do that rally in England, everyone would be brimming with resentment and complaining that the drivers were going to present a threat to the health and safety of their villages”whereas in Italy everyone’s out on the streets having a great time. Wish I was Italian.

Yes, well, now, where should I begin?

I have taken a lot of flak from Taki’s Mag readers for “spitting in the plate I eat off,” as the Italians say, with what are dismissed as whining critiques of the Italians. But I still prefer Italy, and all that it entails, to Britain”regardless of the Italians! So there.

Italy’s countryside and coastline, what’s left of them, are stunning, as are its old city centers. Awestruck by the explosion of Italian artistic genius that was the Renaissance, I ask myself: Why Italy? Why the Italians?

Italy’s health and safety rules are as life-sapping and tyrannical as those in Britain. To these we must add the rules that destroy liberty in every other aspect of life not covered by health and safety.